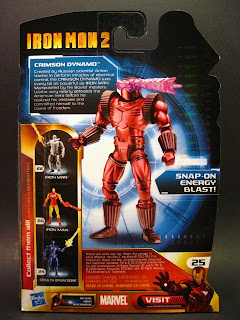 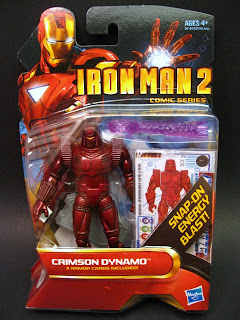 It's up!  If you haven't seen the review on Crimson Dynamo on Articulated Discussions, you've gotta head on over!

As one of the two villians from the Iron Man 2 line, it was a matter of time before I had to crack him open.  Firstly so that Iron Monger won't be lonely, secondly because I screwed up Crimson Dynamo 1 (the first time I got the figure), and thirdly because I didn't new figures to come out after the movie opens this week and lose interest in opening him. 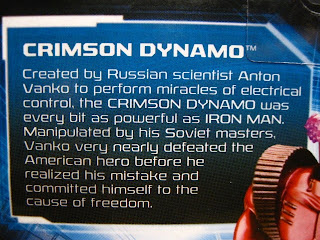 Well how did he turn out despite his being part of a below-par Iron Man Rogues Gallery? I'll tell you over on AD!
Posted by SirDragonBane at 4:45 AM 2 comments:

Who's the coolest character that wears armor in the Marvel Universe excluding Iron Man? 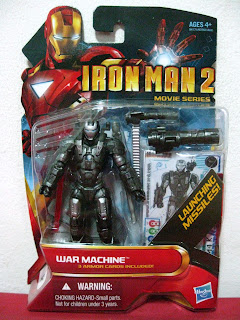 Who's the biggest, baddest character in Iron Man Comics not named Tony Stark? 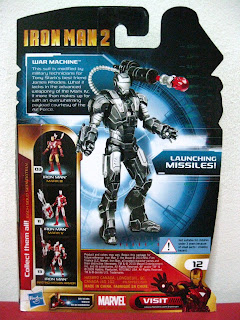 Who's got the biggest arsenal of weapons including double shoulder-mounted Gatling guns?

Who's the most anticipated character in the upcoming Iron Man 2 movie who's name rhymes with Tony? 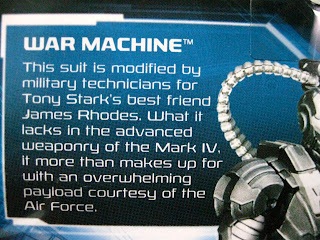 And who's got the bestest ever action figure from the Iron Man 2, 3.75 inch movie line?

Head on over to Articulated Discussion and I'll tell ya there! ;)
Posted by SirDragonBane at 3:35 AM 7 comments:

That's right folks, it's the Green Lantern Corps drill sergeant himself and the grandest poozer of them all, Kilowog! (Or as the wife-to-be likes to call him, Green Lantern pig. Real glamorous. :P) 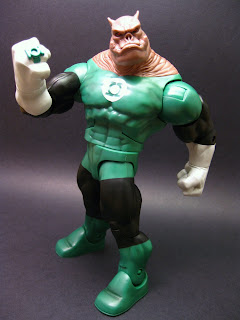 Funny fact about DCUC figures here in Singapore: it was previously tougher to assemble the Build-a-Figures from the old waves before Wave 9.  Excluding Wave 10, which was the Walmart Exclusive Imperiex Wave, you could easily put together a Wave 9 Chemo and a Wave 11 Kilowog from what the department stores bring in.  (Heck, even the excusive Wave 10 can be found here in most specialty toy stores.)  It also looks like Wave 12 Darkseid will follow the same trend.

Thing is, there will always be certain figures that are rarer and thus harder to find.  For Wave 9 it's Black Canary and Green Arrow (though he only comes with a base), and for Wave 11, it's now John Stewart and Katma Tui (and just before the new shipments came in it was The Question.)

So luckily for me I managed to get ol' Johnny S. and Katma T before they ran out.  And despite having to pay a premium at retail from a local department store to get Question and Deadman, Both were worth it because Vic Sage is a firm fan favoirite and the Fan Choice Winner, while the Boston Brand I got was the disappearing (or re-appearing) variant with glow in the dark eyes, mouth, and "D".

Much to talk about with those characters and I will in good time (Heh).  But back to the Big K!  Here's a breakdown of which of his parts came with whom: 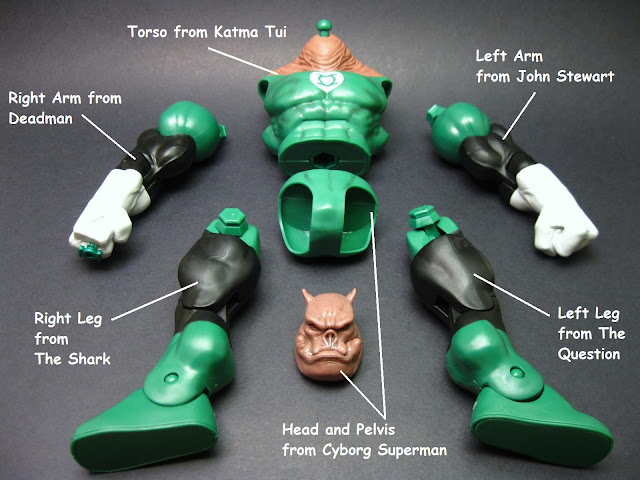 Now let's take a look at the 'Wog in action!

Check it out!
Posted by SirDragonBane at 3:14 AM 13 comments:

DC Universe vs Masters of the Universe: Skeletor

Ah, yes.  The ultimate nemesis for the most Powerful Man in the Universe--Skeletor! 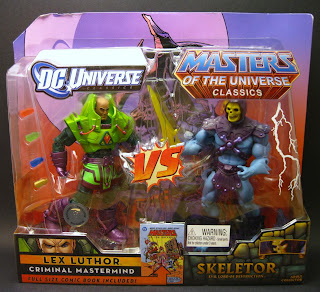 The best part about getting this 2-pack is being able to split his card-mate, Power Armor Lex Luthor, and him with the Rangerlord! 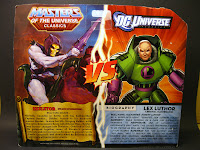 As it happened, I managed to snag the DCSH Lex for a reasonable price out of a really tiny specialty store.  So when I heard that this particular two-pack hit the streets, I was lukewarm about it. 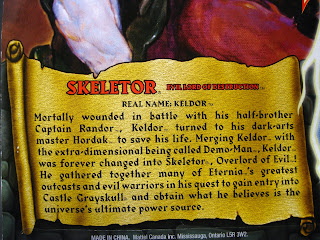 But that's the good thing about hunting in packs, even if the Rangerlord and I only make it a "2-Pack" (get it? Haha. ;D).  So he wanted a Power Armor Lex and I could've use an ol' Bonehead to go with The two-pack He-Man!  Yay!

So is he a worthy adversary for Eternia's Champion?  Click on to find out!

DC vs Masters of the Universe He-Man 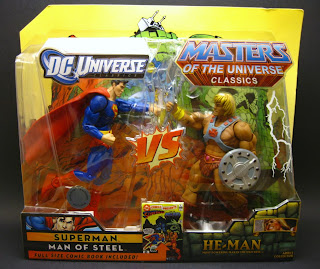 That right folks, just He-Man and none of that blue-suited, red-caped shenanigans called DCUC Superman. 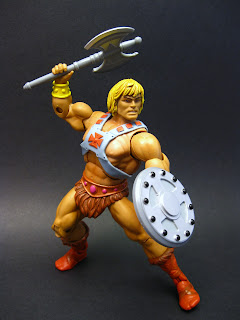 Why?  Because I find the DCSH Supes far superior (barring the Public Enemies version, which is pretty nice too) and also because DCUC Superman has been released, re-released, re-packaged in 5-packs, 2-packs, given long hair, put in a black suit even, and now he appears yet again,  unchanged and unimproved despite his many character inaccuracies.  Ah well, at least I can say this is actually my first DCUC Superman--I have the black and yellow 'S' ones from the DCSH line and have seen no real need to go out and get one more with a thinner and less accurate 'S', a shorter cape, a darker-than-normal blue, and a duller looking, more expressionless face. 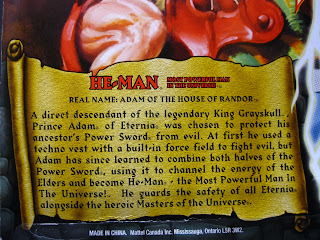 Ok, ok.  No songs, just a toy review. Of my childhood idol, He-Man! 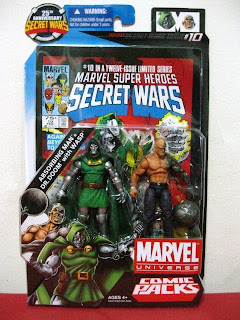 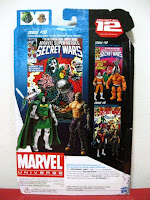 This was the one pack from the 4th and final wave of the Secret Wars 2 packs that I was really looking forward to.  Why?  Because we finally get Dr. Doom is awesome 3.75 inch scale!  I believe it's the first time ever he appears in this size.  Also, I can't deny that the pre-sale photos looked awesome.

Unlike most Marvel Universe figures, Dr. Doom actually comes with an accessory and also...the Wasp! She's in her shrunken form so you'll have to squint to see her in the package pic.  I think it's also a first for Wasp in this scale. 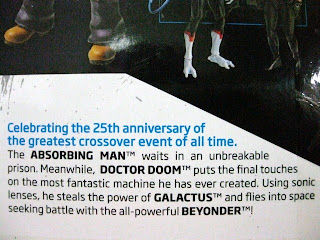 Does this mean that I'd readily chuck the Absorbing Man?  Heck no!  He comes with a ball and chain!  A ball and chain, I tell you!  Of the steel variety!  Larger than a man's head!  And he's one of the villains who actually thinks he can take down the Hulk (No one takes down the Hulk!)  He'll make for a good fight scene companion for the Jolly Green Giant, him and whatever army of Hulk villains are made for the Marvel Universe line in the future. (We want the Leader! Now now now!)

So does this 2-pack live up to much much eagerly anticipated...uh..anticipations? More after the jump!


Check it out!
Posted by SirDragonBane at 4:36 AM 7 comments: 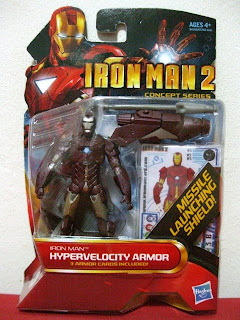 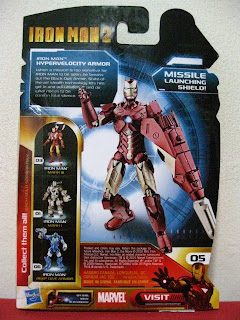 So I admit, I caved and got HV Iron Man.  Actually, I had been eyeing him since day 1 when the figures first hit the shelves.  But I had passed on him because the paint wasn't the best and I'd also though he lacked wrist articulation.  well, I was wrong.  And the armor proved to be every bit as god as I thought it was, maybe even better. 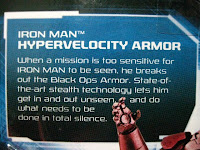 What was really surprising was the articulation, which it runs out was way better than I thought.  So what are you waiting for?  head on over to Articulated Discussions for the latest in the series of Iron Man 2, 3.75 inch toy line reviews--Hyper Velocity Iron Man!

Posted by SirDragonBane at 6:59 AM 2 comments: 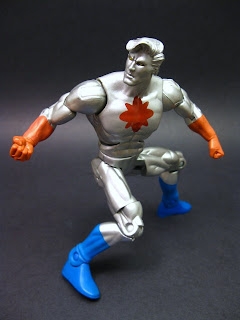 I think it speaks volumes when we look at a toy from from an older wave in a line or series we like and think that it's better than the newer stuff.  Well, Captain Atom from Wave 4 is just like that.

In fact, the loose one I got from my constant hunting companion, the Rangerlord, is probably a factory reject from China--And it's still better than whatever you can get from the current waves now (like 9 through 11.  I haven't had the chance to crack open my Mary Marvel from Wave 12 yet. ;])

Yes, the newer waves offer better paint and sculpts, while also ensuring the quality control is there for packaged figures.  And this old dude does have his paint issues and joint problems, but he does have his upsides compared to the newer figures.

Check it out!
Posted by SirDragonBane at 4:12 AM 9 comments: