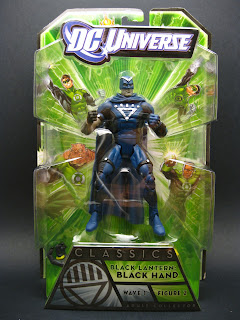 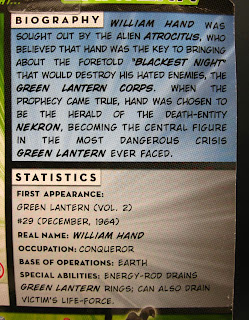 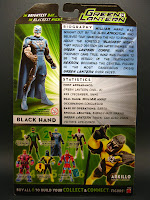 If you've read Blackest Night, you'd know what I mean.  The whole story is really about him.  Not Hal Jordan, not Nekron, and not the Flash, though they all do play major roles.  Wanting to bring peace to the universe by killing everyone?  Keeping everyone "alive" after death so that they'll enjoy this "peace" with him?  Ideas of a madman.  A madman named the Black Hand.

And while he was just a bit-part villain before having his origin rewritten, he's now a major baddie with even more major issues like necrophilia and believeing death to be the ultimate peace.

So it is fitting that he ends up as a part of the 1st wave of DCUC Green Lantern Series.

Check it out!
Posted by SirDragonBane at 4:36 AM 8 comments:

That's right, your truly turns 32 today and rather than feeling old and over-the-hill, I feel younger than ever!

It's probably got a little something to do with this... 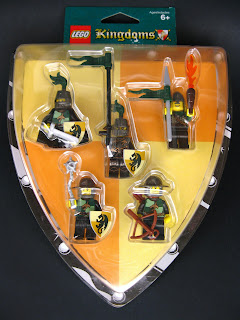 My first birthday presents--from the wife.  I can't wait to bust these open!  :)  Thanks, dear!  I grow younger each day with ya! ;D


Posted by SirDragonBane at 5:02 AM 7 comments:

As you might or might not have noticed, I've tried out a new format for reviewing Lego minifigs with Series 3's Elf.  I've tried in the past to review them like action figures, but I think it's unfair to take something that is an iconic toy in its own right and lump it with the larger genre of action figures.  It's really and apple-oranges scenario--a minifig will always be a minifig, not an action figure.  99.9% of the time, they have the same points of articulation, dimensions, and skin color. (Now it's yellow or beige for flesh, but you know what I mean.)  So I've decided it's fairer to compare minifigs with...other minifigs! ;P  And that's what my new review format will reflect.  It'll be a Lego/minifig rating system of its own. 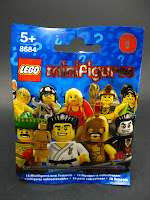 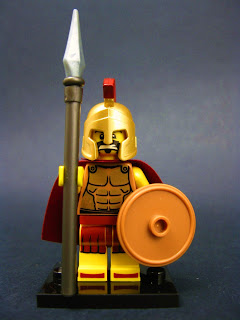 So without further ado, I bring you a one of kind minifig with a theme that Lego has never explored yet: The Spartan! (From Series 2.)

There are so many minifigs out there now that I get excited seeing one that I've never seen before.

This guy is one of them.  The Rangerlord and I scoured the land but all the Spartans had somehow been swiped.  Then on one of his numerous overseas rangings, he finds one for me.  And I think he offered to get me more but I turned him down the, thinking that one Oozer of Machismo was enough of a testosterone overload.  Well, I was wrong.  And here's why...

Check it out!
Posted by SirDragonBane at 2:21 AM 6 comments:

I just love Battle Cat!  I'm sure those of you who picked him up while you could also do.  I reviewed him yesterday and if you haven't seen it yet, I took a whole bunch of pics because he looks simply astounding, especially with He-Man.

In fact, he looks so awesome with He-Man that I wanted to put other guys on him and shoot the photos.  But that would've made the review a lot longer and I didn't want to have to try and squeeze all the pics in.

So naturally, I took more pictures of him, this time with different riders.  Here they are! (After the jump. ;])

Check it out!
Posted by SirDragonBane at 6:27 AM 4 comments: 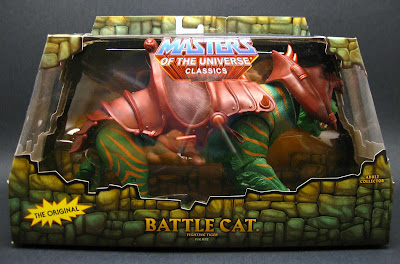 When Battle Cat was first released, I hadn't gotten on the MOTUC rain quite yet.  I'd been eyeing a He-Man, any He-Man, because I wanted to have the icon himself and no other figure.  He had always been my favourite character after all--not just for the Masters of the Universe brand, but also across all toys and characters.

So naturally, I missed out on ol' B'Cat.

Almost an entire year and a few MOTC figures later (including Adam, King Grayskull, He-Ro, and He-Man himself), I knew I had to have the world's most famous green cat. So naturally, I jumped at the chance when Matty Collector put him on their Cyber Monday Sale for the 29th of November last year! 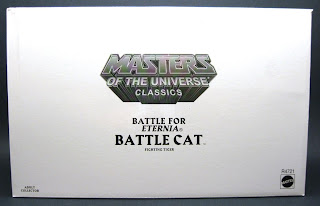 But in all honesty, I thought ol' B'Cat would've flown off the virtual shelf once the sale opened, so I wasn't holding out much hope that I'd be able to get him at all.  Add to that the numerous problems Matty reportedly have on sales days and I pretty much was prepared to not have Battle Cat at all. 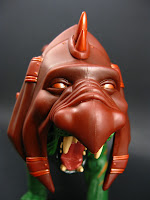 To my surprise, I managed to get to the order page,put in my order, and get the confirmation email relatively easily. There wasn't the dreaded "Red Wall of Reload."

Also, I'd thought Battle Cat would make an excellent Christmas present for the Rangerlord, and since I'd always wanted to get the DC Universe Classics Color of Fear 2-pack set, I was thrilled at having completed my order.  Huzzah! 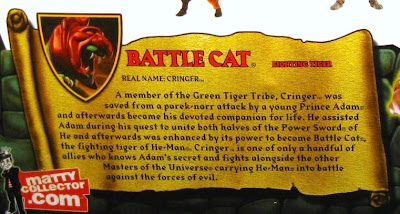 Five weeks later and out of the country for my honeymoon, the package still hadn't arrived.  But on the Monday of week six, I get a text from my in-laws that it had arrived.  According to the mailing labels on the box, it had been to Germany and France before arriving in Singapore?  What did that mean?  I didn't care!  I still don't!  Battle Cat was here!  Double Huzzah!  Of course I had to wait till the following week when I returned home before cracking him open, but it was well worth the wait.  Let's have a look-see, shall we? :)

Check it out!
Posted by SirDragonBane at 7:25 AM 8 comments: 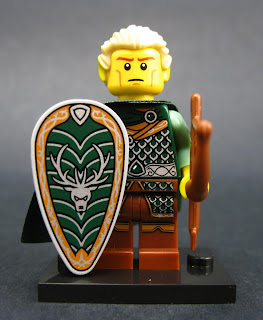 Hey all, I'm back!  After a refreshing and serene honeymoon in New Zealand, I'm definitely not looking to go back to work, especially after two weeks of nothing but beautiful vies of snow capped mountains and glacial lakes.  But I'm sure happy to be back to our home and of course, getting back to more reviews!

So I guess it's fitting that we kickoff the year with something I managed to find in a Warehouse (NZ's version of Walmart.)  There we were on the second last day of our trip, my wife and I, disappointed that there were no real finds in the toy section.  Then lo and behold, we see two lime green Series 3 boxes of Lego Minifigs!  "Elf, Elf, ELF!" was all I could remember thinking. 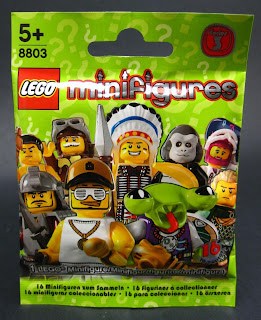 Mel then asked me if I had the bar code list to decipher each figure's blind bag.  Of course I didn't.  I never have them when I need them.  But I replied that the Rangerlord had told me there's a better way: to feel for the elf's bow. As the store was due to close pretty soon, we hurried through feeling the packs and concluded that someone had already been through them and taken our pointy eared friends.  We left but I was kinda expecting we wouldn't find them.

What made me go back to the crumpled packs on the shelf the next day to try again, I'll never know.  But I took my time, wanting to identify each figure I was feeling.  Maybe I'd just buy a Samurai? Maybe I'd get the Sumo wrestler.  I also realized then that the identifiable bar codes from the first two series had been done away with, so feeling the packs was the only way to find them Elves!  By the time Mel was done browsing at the clothing section and came by, I'd found two of 'em.  She also proved to be a lucky charm, helping me fell out two more! Yay!

Two of them are staying with me, and the other two are going to the Rangerlord.  It's part of our blood pact to share in our hunts. :P

So how did Lego's first ever Elf minifig turn out?  Find out after the jump!

Check it out!
Posted by SirDragonBane at 5:47 AM 6 comments: