It seems like just yesterday that I started Chase Variant.  But how quickly and enjoyably these past 10 months of reviewing have gone by.  I guess it's also fitting that my 100th falls on the 15th day of the Lunar New Year because this is the day that the Chinese believe everyone grows a year older.  And Chase Variant is more or less there too.  So Happy Birthday everyone!

On to the review! 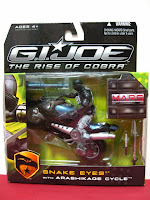 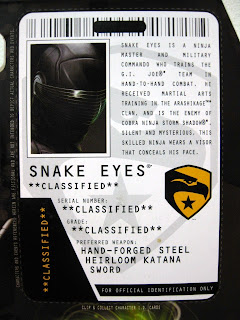 There's one thing that movie makers always pull in kung fu movie sequels--they recycle sidekicks/villains not just from the previous movie, but take them from other movies as well!  For example, Hollywood Ninja 2 might have a sidekick appear to aid our hero fight the bad guy Boss, who turns out to be the Big Baddie from Chinatown Samurai 3!  Oh, the web of intrigue those ninja movie-makers weave!

In that spirit, we have our star for New Year with Ninjas 3--Arashikage Bike Snake Eyes!

How does he compare to Arashikage Bike Storm Shadow?

Will Storm Shadow be jealous of Snake Eyes' skill level?  Or will they join forces against the mysterious Evil One?   Will a fight ensue?

Check it out!
Posted by SirDragonBane at 3:43 AM 4 comments:

Staying on the topic of ninjas (see previous post), I managed to get my hands on this coveted Target Exclusive 3.75" Storm Shadow with Arashikage Cycle! 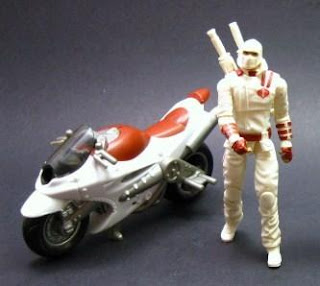 I must've said it a million times before but I just love the red and white colour scheme of Storm Shadow!  So far in the Rise of Cobra line, they've only used the red sparingly on his outfits.  Well, enter this Arashikage version!  Check out the red piping on his pants and jacket, and how they match with the red and white of his bike!

So naturally, this set went straight on my Must-Have list.

But I didn't fly into a gotta-have-it-now frenzy and email friends/family in the US for them to DRIVE-DOWN-NOW--AND-BUY-THE-FIGURE-AND-SEND-IT-STRAIGHT-TO-ME-IN-SINGAPORE-EXPRESS-EXPRESS! 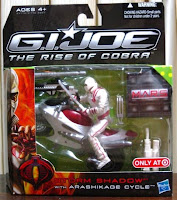 I thought that if I waited long enough it would somehow come to Singapore sooner or later.

It did.  And ironically it came the day right after I had shot the pictures to do a review for Arctic Assault Storm Shadow. 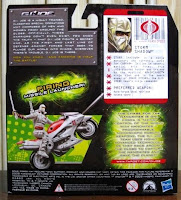 So thanks to asturedragon on Ebay.com.sg, I bagged this Arashikage Stormie and his bike along with Snake Eyes and his bike, which my cousin/confidant/wingman (;P) The Rangerlord so gladly decide to take off my hands since I had Snakesy already.  Not only did I get a great deal, but I also got express service--within hours of Buying it Now! I had met the seller and gotten the goods.

Now, I have my signature Storm Shadow!...or at least until I find the next version more brilliant. :P 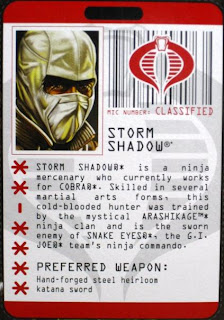 Doing this review reminds me of when I was a kid and we used watch ninja movies on TV.  And if there was a sequel they would show it the following week on the same day and same time slot.  How would we know those movies were sequels?  Well, it's not too tough when they follow up American Ninja with American Ninja 2 in the newspaper TV guide.

Also, somehow at that age, every kungfu movie that had '2' on the end of it had to be better than the first one, cuz by the end of it, the protagonist has attained a higher level of skill and doubled his body count.  And for every kid who wants to be a ninja, greater body count = greater ninja master = better movie.  How simple things were back then.

Check it out!
Posted by SirDragonBane at 3:49 AM 2 comments:

I know New Year's Day has come and gone for all of us, but for us Chinese or those of Chinese decent, February 14th was the first day of Chinese New Year!  And the awesome part is that it lasts for 15 days.  So you eat like it's Thanksgiving except for two weeks straight.  Sweet. :P 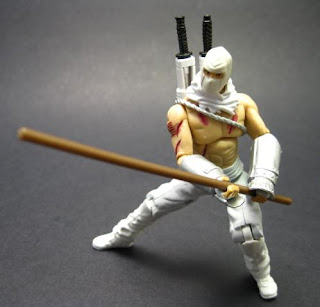 But I'll take a break from stuffing myself to talk toys just for a bit.  And since it's the Chinese New Year, what better way to celebrate than with the awesomest, stealthiest, Chinese warriors of them all: Ninjas!

What really attracted me to this figure is how gory it actually looks.  I don't think we've ever gotten a Joe (or any other action figure for that matter) with bloody cuts all over.  He comes as a maskless variant too, but I much prefer the masked Storm Shadow because he seems more uncompromising, as if he won't reveal his identity no matter how badly hurt he is. Nice. 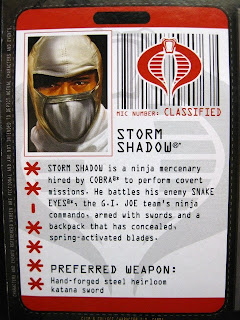 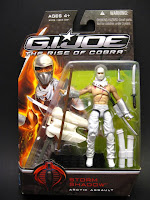 He also captures the climactic moment of the movie where he dukes it out with Snake Eyes.  He's more or less been sliced to ribbons and so has his shirt, which has fallen off of him.  I guess it's just before the chick magnet moment where he tears of his mask and goes all Mardi Gras topless. Heh.

But we all know ol' trusty Storm Shadow doesn't die despite being run through by Snakey.  Heck, actor Lee Byung-Hun has signed on for at least another movie and word is that they've offered him a bigger role in the sequel.  Good work, Stormie!  Could it be he acted so well that he not only wowed audiences but fooled Snake Eyes too?  I mean, after all, he's a good guy spying on Cobra, right?  So does that mean he kinda 'let' Snake Eyes win in that climactic fight?  Storm Shadow fans like me would like to think so. (Yeah he did. For sure. ;P)

So let's see how his toy measures up to his oh so sneaky-but-skillful-enough-to-dodge-death character!

Check it out!
Posted by SirDragonBane at 5:43 AM 4 comments: 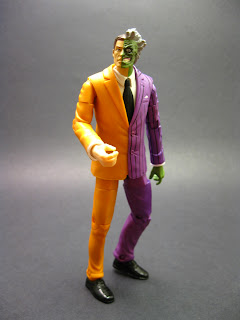 I guess that's the only problem with DC Universe Gotham City 5-pack Two Face--he needs accessories.  And it doesn't even have to be his trademark tommy gun.  Give him a coin, give him a knife, give him a cigar, give him anything, and give us a break, Mattel!  Something's wrong when the set comes with five figures and only one has an accessory (Catwoman and her whip).

Seriously, for the S$140-150 we're being asked to fork over (works out to about S$30/US$21.40) a fig), is it too much to ask that the figures that need accessories get them?  Batman needs a batarang, Luthor needs some kryptonite or ray gun, Catwoman has her whip, and Two Face should get his tommy gun like in the DCSH release from 2007 (of which he's a repaint of).  Superman doesn't need anything and I'm sure if they didn't give him an accessory it wouldn't be a big deal.  But say Supes came with a Phantom Zone Projector or even one of Mattel's new-fangled flight stands, I'm sure lots more people would grab this 5-pack, myself included. 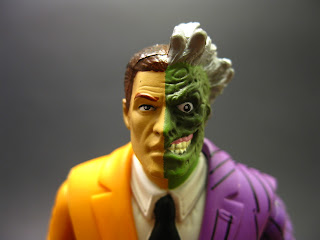 Well as it happened, I instead chose to try and get the 2 figures I wanted (Catwoman's the other) from the pack, hopefully loose, and be done with this set.  The best part is that no one wants ol' Harvey, really, so I only had to pay S$12 (US$8.59, shipping included) for him.  So even if he doesn't have a gun/coin/whateva, he's still a steal.

So how does stand on his own, especially when compared to the previous DCSH version (which I don't have)?

Check it out!
Posted by SirDragonBane at 4:00 AM 2 comments:

Look what the cat dragged in!  Er, or rather the cat..er...um...yeah, it's DC Universe Classics Gotham Universe 5-pack Catwoman! 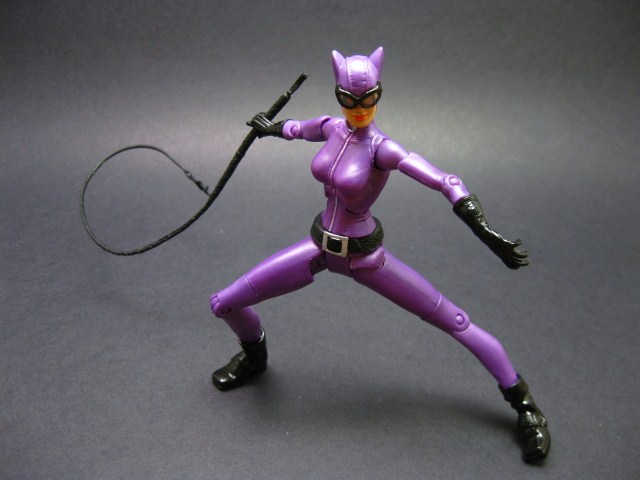 If you missed the boat to get the DC Superheroes black suit version way back when (and chances are you, like me, probably did) or you don't want to fork out a fortune for te DCSH version, then you'd really want to get this figure! 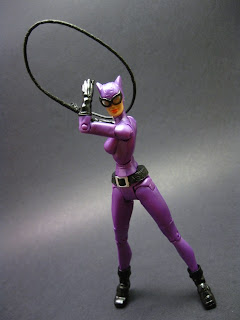 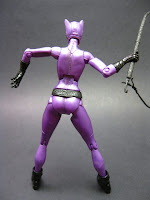 The problem then is what to do with your 17th Superman, 25th Batman, '60s Flash Gordon suit Lex Luthor (aka Danger Disco Dancer Lex), and Two-Face (but zero accesories).  In fact Catwoman is the only one of the five that comes with an accessory--her whip!

Indeed, some of you may like skin-tight-purple-shirt-starched-collar Luthor, and some (like me) will want a Two-Face to round out Bats' rogues gallery.  So what to do but turn to Ebay?  And that's where I found this gem along with half-orange-suit-half-Green-Goblin-Doc-Brown Harvey Dent (Review to come!)

But she didn't come cheap, at least far as DCUC figures and Cat Burglars go....

Check it out!
Posted by SirDragonBane at 4:33 AM 7 comments:

(Cheap) Attack on the Pit!

Yeah it's official, the GI JOe Rise of Cobra Attack on the Pit 5 figure + one vehicle set has become a cheap shot, a punch below the belt, a blow to the nether regions.

Am I mad I got mine at the 'original' clearance price?

When I stumbled upon the price there were 7 sets left.  Now they are 5 thanks to The Rangerlord. ;)

Posted by SirDragonBane at 11:53 PM 2 comments: 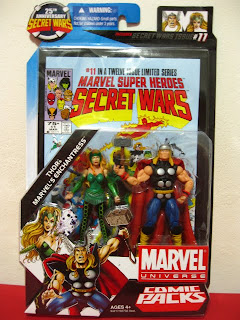 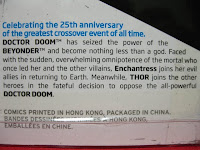 Thing about Thor is this: he's one of the original Avengers, he's (arguably) as strong as the Hulk, he wields arguably the most powerful weapon in the Marvel universe, and he can also control weather, especially storms and lightning.  But somehow he's always not a main player in most story lines.  He may have (had) his own comic book, but he never seems to be anyone's favourite for a leading role. Well, until the upcoming movie at least.  And even then it's so that they can make an Avengers movie after that.  Maybe that's why it's taken so long for a Marvel Universe 3.75" version of him to appear.  But appear it has and boy have we all been awaiting his arrival! (Ok, most of us.)

And here's the bonus: Since it's a Secret Wars 2-pack (Wave 3) he comes in, he's accompanied by the lovely enchantress...or so we think! 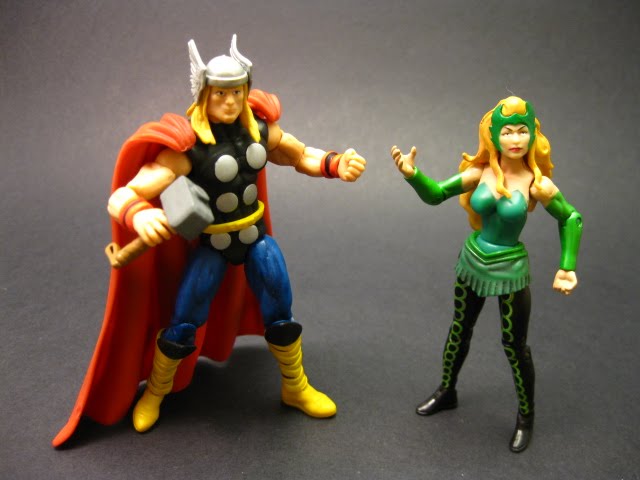 Check it out!
Posted by SirDragonBane at 6:30 AM 8 comments:

That's the ratio of Good Joe females to Evil COBRA females in the Rise of COBRA line. 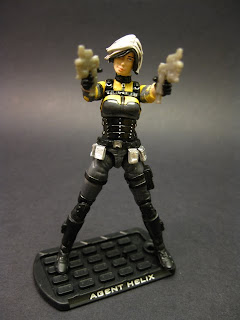 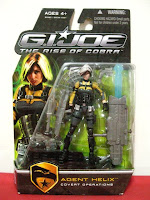 For the Joes it's Scarlett, Cover Girl, Dial Tone and Agent Helix, while for COBRA, it's well, just Baroness!  Even then, the Baroness is not technically a bad girl.  (Or is she? :P)  But of these 5 female characters, it's Agent Helix and her repaint Dial Tone (from the Zartan Infiltrator 5-pack Toys R Us Exclusive) which are the rarest. 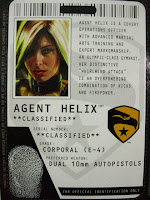 So imagine (once again) my surprise when I walk into one of the specialty toy stores that favours selling GI Joes to find Helix hanging on a peg on display by the door.  Then again, I probably shouldn't have been that surprised because this place does regularly bring in new stock, albeit in small amounts.

So what makes the good (or bad) Agent the most sought after female in the ROC line?  Well, after busting her open, I can only put it down to her being a short-packed figure.

Check it out!
Posted by SirDragonBane at 2:09 AM 4 comments: