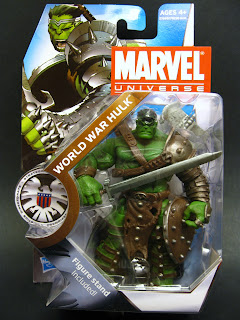 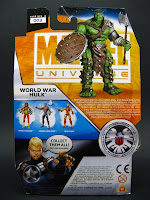 I just can't get enough of this look for the (not so) Jolly Green Giant!  This was probably the Hulk's best moment in recent years and all that recent stuff about the Red Hulk and the Fall of the Hulks kinda sets the Hulk character back a couple of years, as if he'd had this whole interplanetary episode and then forgot about it.

How could he?  He should be way MORE dangerous than before because of the whole Planet Hulk experience.  Thinking about it just makes me mad.  And when I'm mad, I get angry...And when I'm I angry I..I..WWWRRRREEEAAAAAAAAAAAAGHHHHHHHH!!!!!  HULK SMAAAAAAAAAASSSSSH!!!!

Oh, er, sorry.  Where were we?  Oh yes, the review.  I'm glad they gave this Hulk a 3.75" version.  The King Hulk 6" Marvel Legends version is awesome, as is the Face Off release.  So why shouldn't this one be? 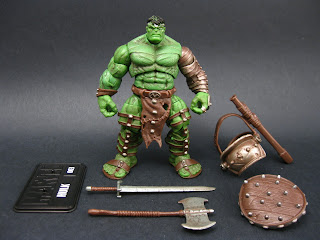 Like: Weapons and accessories.  Marvel Universe figures seldom come with much else other than figure stand and perhaps one other accessory--either a shield or a blast effect--most of the time it's because it's an item that defines the character.  There's Thor's hammer, Cap's shield, Thunderball's...uh..ball...  These are things that these guys gotta have.  World War Hulk here doesn't necessarily need his weapons, at least not both of them and a shield, but he gets them anyway.  Yay for us! :) 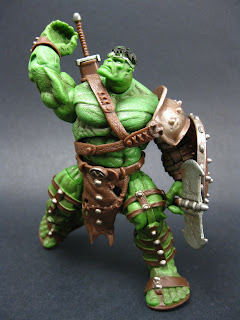 Like: The excellent ensemble of parts that make the main sculpt, his loincloth, harness, and weapons.  All these are brand new pieces, with detail that puts the 6" version to shame.  The weapons and shield have nicks and cuts and all sorts of battle wear, the leathers and loincloth have tooling to bring out their texture, while his armor and skin also bear the same combat wear.  Simply a marvel to behold. 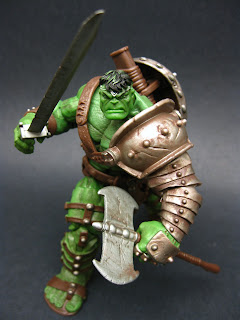 Also, World War Hulk's chest and torso is much less broad compared to previous Marvel Universe releases, while his arms are not as huge and ape-like.  This is excellent and true to the comic art, in which Hulk has less bestial and more human proportions. 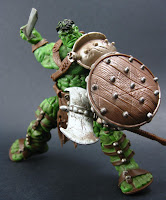 Like: The brilliant wash over most of the figure.  There's a rust brown wash on his armored parts: just enough for wear, and his face and skin have also been given dark shading to bring out the muscles and leathery texture.  His leathers and other brown areas are the only unwashed parts, but with all the detailed tooling on them, I can hardly hold it against Hasbro.  Let's put it this way--WWH has more washed than unwashed parts, and that certainly doesn't mean he's got good hygiene habits. 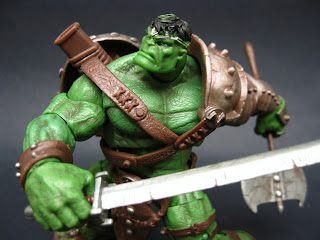 Like: That his large left shoulder guard is part of his harness instead of his arm.  This way, there's a better range of motion for his arm, looks like he's wearing it on his shoulder instead of being part of the arm or the shoulder (thereby restricting its movement).   The harness is a separate piece, and therefore adjustable.  What works great is that I can move his arm, then set the shoulder guard on it.  This makes it easy to look really great.

Like: That he has a usable sheathe!  It's part of his harness as well, and houses the lengthy blade snugly. The sheathe is also a good place to clip on his shield, which has a clip that fit perfectly on the scabbard as it does his wrist. 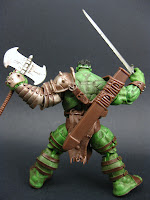 Dislike: That he can't hold his weapons properly because his grip is too big!  Shocking!  This is a big problem. It almost meaningless if you give a figure a ton of stuff that he just can't use/hold onto.  Thankfully he only drops his weapons when his hands are turned downwards.  But still, he shouldn't drop weapons meant for him at all. 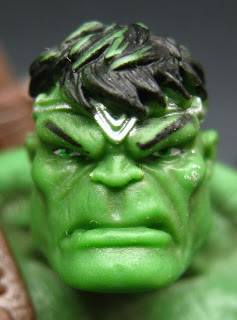 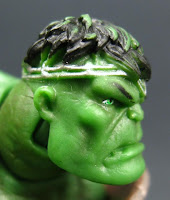 Dislike: Well, sorta.  I'm not sure I like his head sculpt.  It doesn't have the super large upper lip that's characteristic of the brooding King Hulk.  His eyes are a little too big, and his mouth is open?  I guess World War Hulk does have his mouth partway open in the comics like that.  Combined with the eyes on the figure, it makes him look like he's a deer in the headlights.  It's brood or bash, I say, brood or BAAAAAAAASH!!! 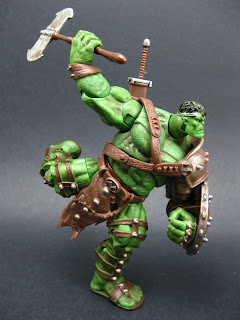 Like: The thigh cuts and double-jointed knees!  Talk about a marked improvement from the previous Marvel Universe versions!  The Green, Gray, Red, and Secret Wars Green all were very stable but also very rigid in terms of waist down articulation.  But WWH here has sacrificed very little of that stability and added tons of flexibility.  The joints are all nice and tight, but beware of over twisting his ball-jointed legs or they might pop off.  But if that ever happens no worries, they pop right back on. ;) 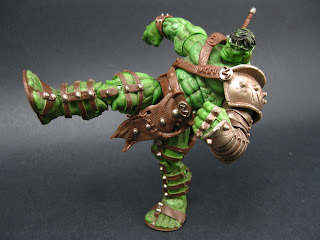 Like: The hinge/ball combo for his head and the swivel at the base of his neck!  When I busted him out of the package, I was initially disappointed that he could only look down.  Then I realized his neck might have been attached backwards. So I swiveled the neck piece 180 degrees and viola!  He looks up and down perfectly. 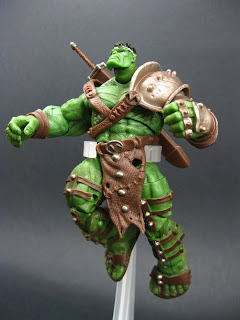 I don't know if this is the case for all the World War Hulk figures, but I think it's a safe bet to say it is.  Not to worry, though.  It's a really quick fix that doesn't require any tools--just your fingers and some good old-fashioned elbow grease (ie. twisting). ;) 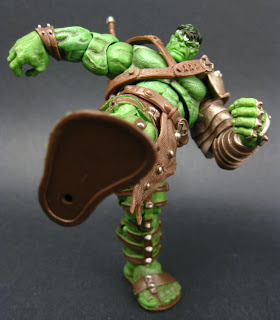 Aesthetics: 9.5/10 - There's no way you can't love this Conanesque look for the Hulk.  Throw in excellent tooling on the majority of his parts, and a very comic book accurate and proportionate sculpt, and we have a winner!. 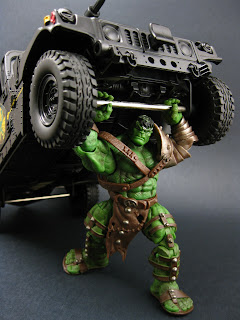 If there's one thing to pick on,  it's the face.  The look they gave the King Hulk 6" Marvel Legends version was spot on, so perhaps Hasbro didn't want the 3.75" figure to be a miniaturized carbon copy of its larger 6" predecessor and produced this wider-eyed, scowly faced version.  Funny the thing with the head is that the more I look at it, the more like it. 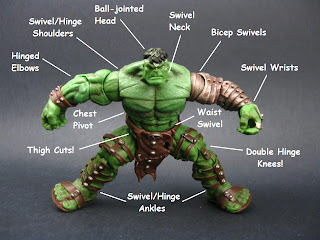 There's very little paint on WWH, with only his eyes, circlet, and all silver parts painted.  And what they've painted, they've painted well.  The armored parts especially deserve mention, because it's done so well that after a wash of darker paint, you can't tell what's painted and what's not.

Poseability: 9.5/10 - World War Hulk might not be able to hold his weapons well, but he has a sheathe!  What about them thigh cuts?  Simply awesome, baby!  Add some nice, tight ball joints at the legs and double hinges at the knees and you've got some amazing leg movement. 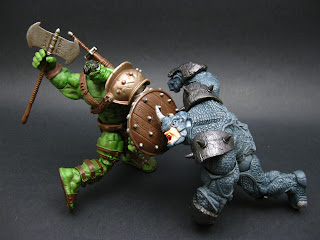 World War Hulk may already look great posed by himself, but when posed with others, he's exceptional!  You also can't deny WWH's excellent head movement, as well as a great waist swivel and chest pivot combo.  There's only two other Marvel Universe figures that share the same combo: Spiderman and Captain America.  That all three figures have great poseability is due in no small part to the chest/waist movement! 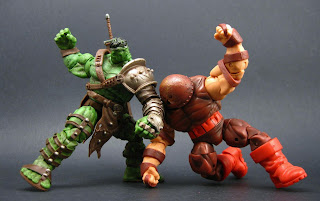 WWH would receive a perfect score, except for being unable to grip weapons properly at all.  Imagine GI Joes who can't hold their guns right.  They'd be simply frustrating to play with!  As for the upper body, the elbows get a good 90 degree bend, but shoulder his hinges are restricted in the front by his big chest, as is normal with a bulky figure like Hulk. 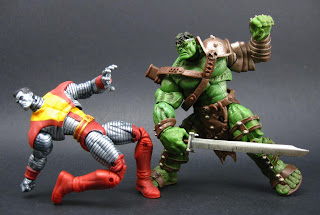 Fun: 10/10 - Hulks are always fun, as any Hulk fan would tell you.  But this Hulk is especially fun because he's got weapons, a shield, a removable harness and a separate belt/loincloth combo. The latter can't be removed without some effort, but unless you're stripping him down for spare parts, that's not going to be a problem at all.

World War Hulk is also good fun because he can (and has) fought everyone.  The Illuminati, the X-Men, the Fantastic Four, Hulkbuster Iron Man, and of course, the Sentry.  It would be especially interesting to hunt down all the members of these teams (or wait for them to be made) just so Hulk can beat the pulp outta them all. ;) 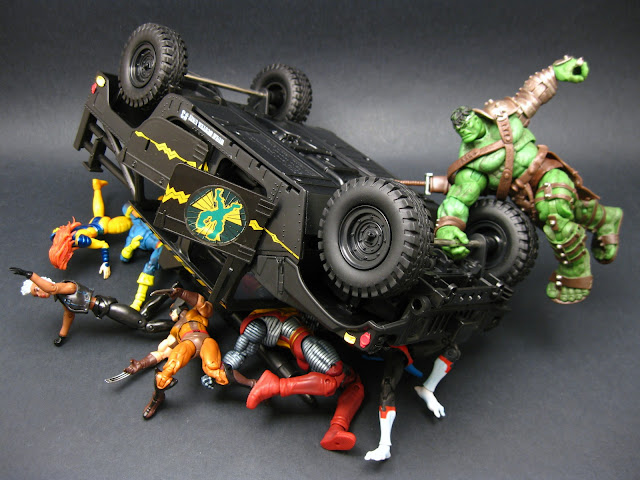 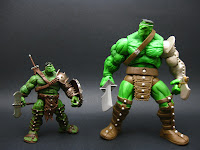 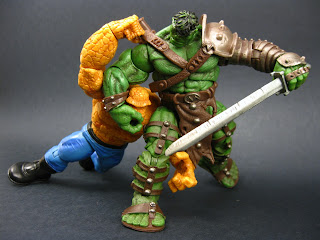 Value: 9/10 - There's no shortage of value for money here.   WWH has got lots of wash all over, separately tooled pieces (harness, belt & loincloth, right leather wristband), lots of specially tooled parts (gladiator sandal legs and feet, armored left arm and spiked left hand, the new head), and superb torso and leg articulation.  On top of all that, he comes with your regular figure stand. 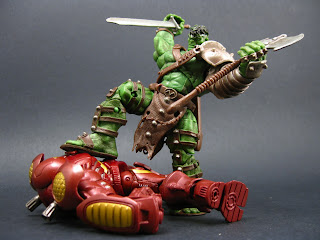 The new figures lack the paper accessories of the ID card and the top secret letter, but if it mean the money form printing those goes into accessories.paint and tooling, then it's well worth it! 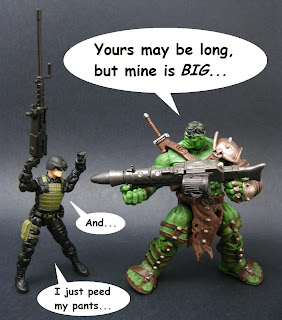 Overall - 9.5/10 - Heck, WWH is probably the best Marvel Universe figure released to date--bulkier, with great tooling, great accessories, and articulation comparable to the likes of Captain America and the classic Spidey. And those guys are slimmer too, meaning that a bulky guy like WWH shouldn't be able to move the way they do, except that he can.

Compared to the Marvel Legends King Hulk, WWH has superior paint/wash and sculpt, has better articulation, and has and extra shield and stand.  The only thing that holds him back is the nonexistent grip on his weapons.  This makes him a way better figure than the 6" version, unless size matters a lot to you. ;) 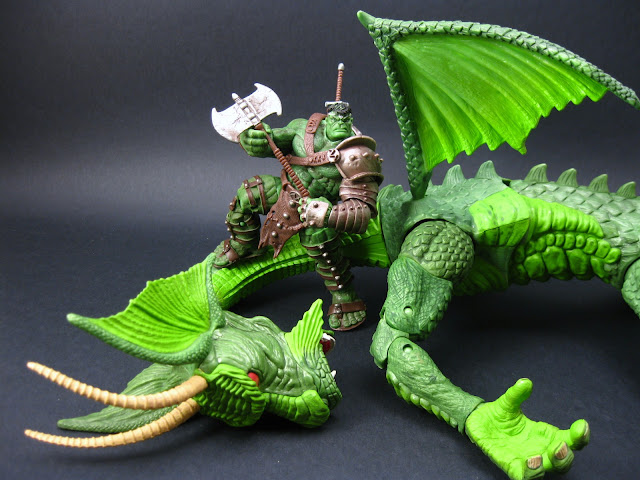 Posted by SirDragonBane at 5:36 AM