Comic of the Day: Na'vi Lovin'!

What happens when you put all your favourite blue-skinned sci-fi/fantasy characters of the 80s till today together?  You get some hot Na'vi lovin', that's what.

Today, I have special guest 3B, who came up with this hilarious look at blue-skinned intamacy.  It all came about when I commented on my Keldor review that I must be a Na'vi lover for thinking he was handsome (Keldor, not 3B).  Novelty gagged.  Well, 3B agreed that he was, and roguishly so at that. (Again, Keldor, not Novelty.)  And this is a product of all that brotherly love...Enjoy! 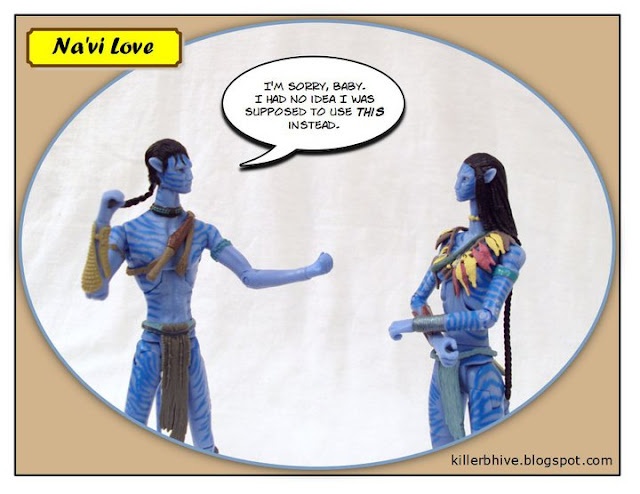 Well, if you dig that Neytiri and want to connect with her the right way, hop on over to Killer B Hive, where 3B reviews the "big, blue, baddass babe," in his own words.  Enjoy that too!

Posted by SirDragonBane at 3:36 AM 4 comments: 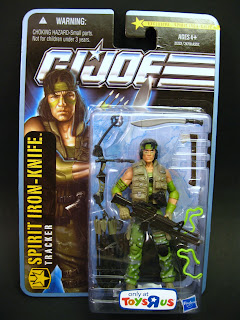 If ya didn't know, that's how you cry out Spirit's name in Arnese, the Anglo/Austrian dialect spoken by Ahnuld, the One True Governator, in the movie Predator (when the former dies). 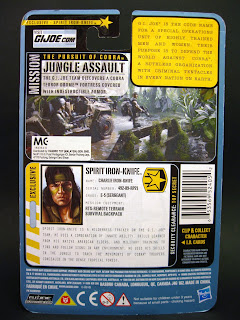 Throughout the whole movie, Billy Sole (Sonny "I-used-to-be-a-porn-star-then-I-fought-a-Predator-with-nothing-but-a-big-ass-knife-and-now-I-wanna-be-your-governor-of-Kentucky" Landham) is the team's tracker and does Major Alan "Dutch" Schafer's (Arnie's) bidding throughout, except when he doesn't "get to dah choppa" and dies.

Ok, so maybe Dutch didn't say those things to Billy.  But who can forget the most memorable death scene that was never shown?  Was it too graphic?  Must've been, because the scream didn't match the crazed look in ol' Billy's eyes, the giant knife in his hand, and the macho way he cut himself on the chest just to show the Predator how tough he was. 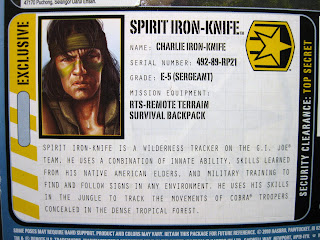 I vividly remember the scene from the very first time I saw the movie especially since I didn't actually see the Predator tear him apart.  I must've been 5 or 6.  The nightmares I had.  And now I can relive them, through the Pursuit of Cobra line and this wonderful Spirit Iron Knife figure that mysteriously looks a helluva lot like Billy.

Enough prattling about Predator from me--let's see if the figure turns out to be as cool as the character!  Which one, you say?  Both of 'em!  No, not Duke and the Predator.  Billy Sole and Spirit Iron Knife!

Check it out!
Posted by SirDragonBane at 4:24 AM 9 comments:

Masters of the Universe Classics Keldor 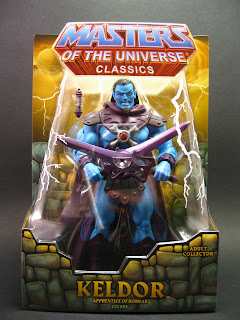 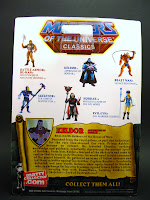 But of course, you all knew this already, if you watched the 200X Masters of the Universe Animated Series.  Like the Count Marzo character, Keldor remains memorable simply because he's background to the Biggest Baddie on Eternia.  You can't forget him because he's been written as the half-brother of King Randor, which also makes him Prince Adam's Half-Uncle.  And the best part is: he's good-looking.  He's got the flowing locks and that roguish goatee--he looks nothing like Skeletor!

What I also like about Keldor is that he explains lots about ol' Bonehead: his blue skin, his source of power (practically made a deal with the Devil when he promised to help out Hordak), and most of all, his motivation for hating King Randor. 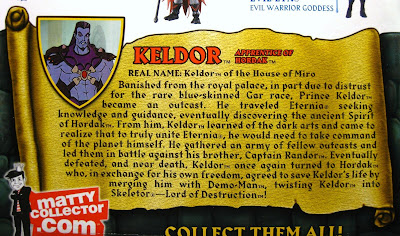 On top of all of that, he provides a way for the coming of Hordak to Eternia that doesn't involve She-Ra.  As much as some MOTU fans didn't like the 200X series, you still have to give credit to the writers for coming up with a brilliant character idea like Keldor!

And so here is immortalized in Classics form despite being a 200X character--one of the better characters and toys of the line, I might add.

Check it out!
Posted by SirDragonBane at 3:26 AM 11 comments:

Masters of the Universe Classics Orko and his Man-Toy Accessory! 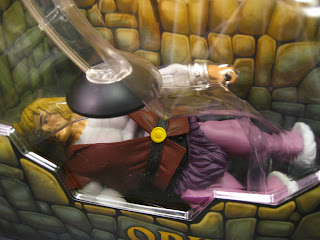 Call him cowardly, call him a layabout, but what Prince Adam really is, is a tool!  An accessory.  A smiling, skiving, I'll-take-a-break-now-and-do-it-later sonofagun.

What?  You thought this review was going to be about Orko?  Hah!  You're wrong!  And maybe a bit right...because of it half is.  Well, less than half because he's so small compared to the muscle-bound man-child Adam! 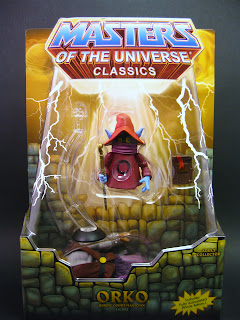 I originally really wanted to pick "Orko" up really bad, but realized that I didn't really have to have Adam that much, especially if he was and exclusive and would cost a ton after shipping from Mattycollector.com.  But lo and behold, Orko appears magically in the midst of the "flea" markets of the Eternian-influenced areas at China Square Central in Singapore.  And for what it would ordinarily cost a new figure here (after shipping and what-have-you)--S$58 (US$41.40). 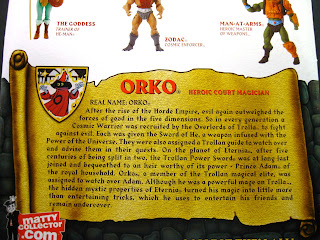 Here I was thinking that he'd cost twice the price since he was a "2-pack."  Well, I didn't hesitate.  So thanks to Dave from the toilet...er, I mean "Davestoylet," I'm now the proud owner of Eternia's most legendary layabout.

On a side note, I sorta went on a mini-spree and picked up Keldor and Count Marzo as well from Toyrealm in the very same building.  They were having a buy-one-get-a-second 50% off sale, you see.  So the good Count and the even gooder Keldor cost only S$41.50 (US$30) each.  (Actually their both evil) Those guys are also really good people...The Toyrealm owners, I mean!!!  :)

So how did the the most purple-pink color combo characters from the Masters of the Universe...uh...universe turn out?  Well let's take a look...

Check it out!
Posted by SirDragonBane at 6:40 AM 9 comments: