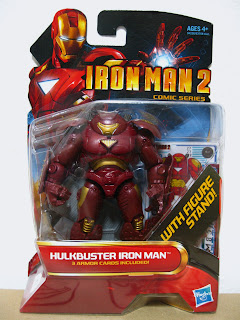 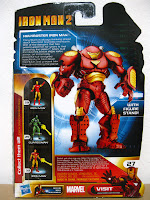 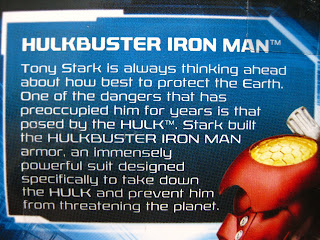 So does the Hulkbuster measure up against his super-sized opponenets?  Check it out in this review! 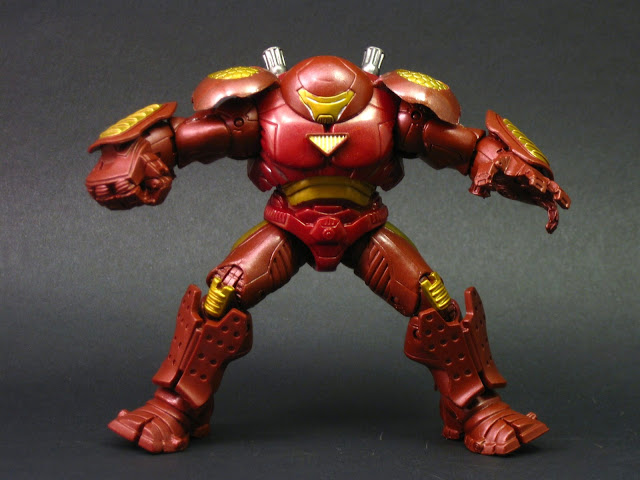 (I originally wrote this review for the now defunct Articulated Discussion site.  I've recovered what I could from drafts and reposted it here.  Enjoy! ;) 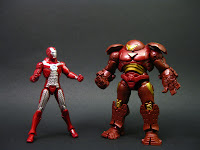 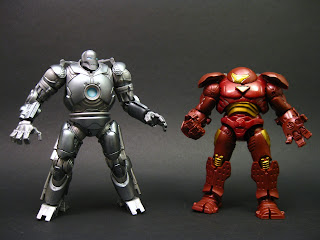 I gotta be honest: the first thing I thought when I had him in hand (in package) was that he was a tad small.  I was expecting an Iron Monger-sized figure in height or at the very least a figure comparable in girth to the Marvel Universe Hulk.  As it turns out, Hulkbuster Iron Man is neither.  But while he wasn't as bulky or as tall as expected, the sculpt certainly doesn't disappoint in terms of detail.

One of the first things that caught my eye were his feet (and shin guards) and also his fists.  The shin guards in particular are pretty unique and are sculpted after the Bowen Designs Hulkbuster armour statue (as far as I can tell).  I love that his feet are nice and broad with bands of armour and have a cleft to separate the big toe from the rest of the foot.  The open hand and closed fist are also extremely detailed, with each almost as large as his squat round head. 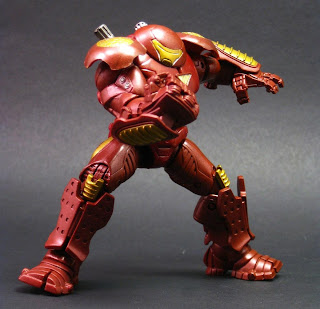 The trademark forearm and shoulder guards are also there, with the shoulder guards cast from separate pieces of hard plastic and are glued into slots in his shoulders.  While they're supposed to be part of his shoulders, the guards are actually fixed to hover over his shoulders and look flimsy from a bottom up angle. I wonder if they would've been better to cast them in a softer plastic and let them float lower so the gaps over the shoulder wouldn't be so apparent. 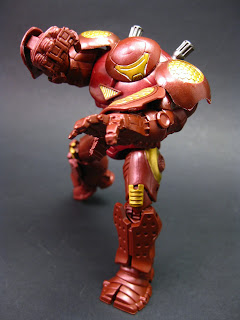 His forearm and shin guards are made of softer rubber, which his shoulders should've been. This I think is great-- it won't crack or chip as easily as a hard plastic piece.  But while the shin guards are part of the lower leg mould, the forearm guards, like the shoulder guards, are also separate pieces that are glued on.  The great thing about the forearm shields are that they are attached to Hulkbuster IM's fist, making them look flexible as well as sturdy no matter which way you've got his hands positioned. It's also worth noting that his triangular chest arc reactor vent is a glued-on piece of plastic, so if you'll want to watch out for glue stains around the chest when picking this guy up. 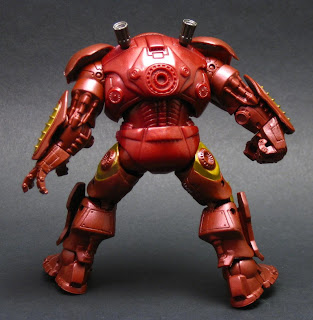 Other highlights of this sculpt are lots of round vents in his back and sides of his legs, as well as pistons at the back of his calves and elbows.

Hulkbuster Iron Man also has a very interesting material composition: his torso and shoulder guards are cast out of hard plastic, while his head, arms, and legs are made of softer plastic, but not as rubbery as his shin and forearm guards.  I really don't know what the reason for this would be, but I guess it would lessen any potential damage should you drop this fig. 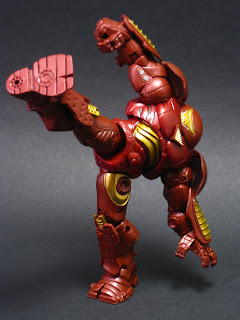 Aside from the hovering shoulder guards, Hulkbuster IM has a fantastic sculpt that ranks up there with one of the best Marvel has produced in this scale. 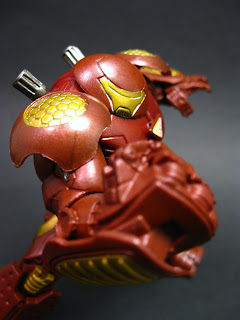 Most of this figure isn't painted, with everything sculpted in a dark red and only his golden parts painted.  As simple as his face is, the gold isn't cleanly applied with both spills over into the seams of the faceplate and sloppy under-painting in the areas which haven't been over painted.  His eyes and seams at the cheeks are supposed to be white (or silver?) to indicate light but because of the way the face has been mispainted, it simply looks unfinished.

The other major problem area was the gold rib area of his armor.  It wasn't visible in package, but I was disappointed to find a line of glue slop on his right rib area and a chip on the lowest panel edge (also on the right.)  But that isn't all: the upper left rib panel has two big paint chips that are really obvious when you rotate his chest to the left. 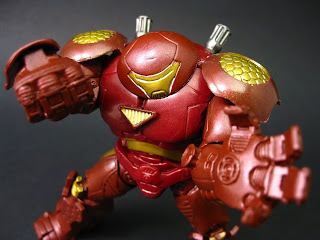 A minor problem that might bother some of you is that since his limbs and head are cast from softer plastic and his torso is made of harder stuff, the colour isn't quite a match--while his chest has a nice muted shiny gloss, his head and limbs have a matte finish.  Despite this, the colours are close enough that you won't notice the difference unless you look really closely.

Other than these issues, I have to say the gold on his shoulders, chest piece, forearms, thighs, and knees are pretty solid with no spills. 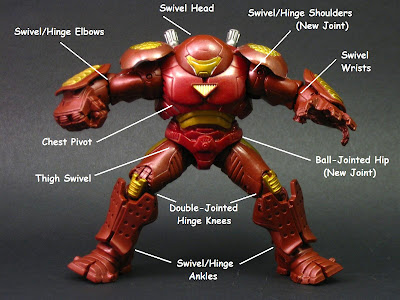 While I was initially disappointed that he didn't have hinges on his wrists like Iron Monger, he does have the 22+ points of articulation the figures in this line have.  And while his shoulders have full range but are blocked by the shoulder guards, everything else is pretty much unhindered.

This figure does have some new joints though, namely the swivel/hinge shoulder joints and the ball-joints (which some call “Hasbro” joints) in his hips.  These are basically the same “ball” joints with smaller hinge tracks.  And while I first thought them to be a tad too loose compared to the old joints (after accounting for the natural loosening of joints after play), I was impressed that they've maintained their level of tightness while being easier to manipulate.  So I think those of you who are having problems with tight joints in IM 2 figures won't have to worry when it comes to Hulkbuster IM here—he's a ton more intuitive without being any less stable. 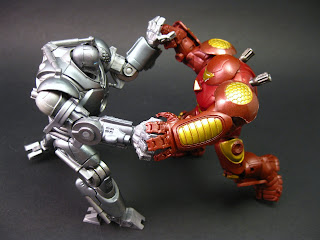 I'm normally not impressed with head swivels but this guy has one where I expected no articulation at all.  I can't emphasize how much a turning head can add to your poses and I really have to thank Hasbro for going the extra mile here.

The name says it all! Hulk. Buster. Iron. Man.  He was born to go toe to toe with the Big Green Goliath, so naturally that's who he's best posed with. 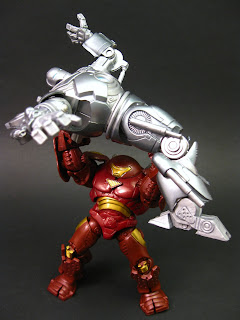 Also, two large figures with excellent balance make for super fun posing.  There are already two characters in the Marvel Universe line who are plus size (namely Hulk—Green, Secret Wars, and Grey—and the Red Hulk) and now there are another two in the Iron Man 2 line—Iron Monger and Hulkbuster IM.  With Juggernaut to come, putting all of them together in a knockdown, drag out, super-sized street battle is something that's on my to-do list. And as you can see, large figures like Hulkbuster IM, Hulk, and Iron Monger can literally grapple with each other in poses otherwise unachievable with smaller figs.  They can also lift each other and still maintain their balance! 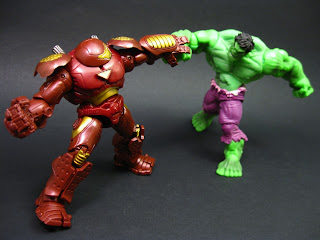 So he's not as large as Iron Monger or the Hulk, but he's still just as bulky as two Iron Man 2 figures put together.  Nevermind that he doesn't come with any accessories other than his figure stand and 3 armour cards, he's still worth his weight in sculpting and detail.  So he may not have the best paint, but he does have lots of added parts that are not part of the base mold like the shoulder pieces, the forearms guards and the chest arc reactor vent.  He also has new “ball” joint pieces which will please those who didn't like the old ones. 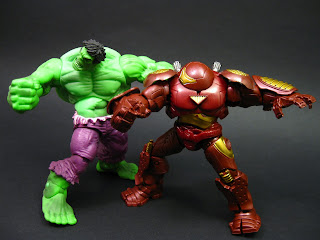 Worth it?  Yes.  Hard to find?  Definitely—I haven't seen one on the pegs yet but I got this one because my toy hunting wingman, The Rangerlord, spotted these at the airport.  Yes, the Singapore airport, before it was seen anywhere else!  And Rangerlord was on his way out of the country too, so I had to wait for him to return, while he opened his and had a ball of a time re-enacting Hulkbuster IM vs Titanium Man fights.  (No prizes for guessing what one of the upcoming IM2 reviews is!) 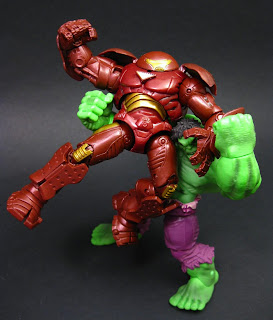 Paint: 7/10 – Suffers from the inconsistent paint inherent in this line.  Could be much better, but still not too bad.

Fun: 9/10 – The best figures are ones like these which push the envelope on a great idea.  Hwo wouldn't something as cool looking as a suit design to bust the Hulk's behind?

Value: 8/10 –  May not be as large as some figures, but bulky enough to be more than worth it. 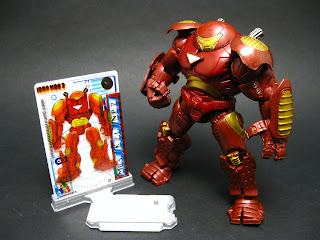 Overall: 87/100 – This is a great toy.  He falls just short of wonderful because of a couple of paint issues and perhaps a major sculpting one (shoulders--which may not be a problem to some!).  What this means is that if you've got some talent or experience in fixing up your toys in the paint department, you've got yourself a wonderful toy! 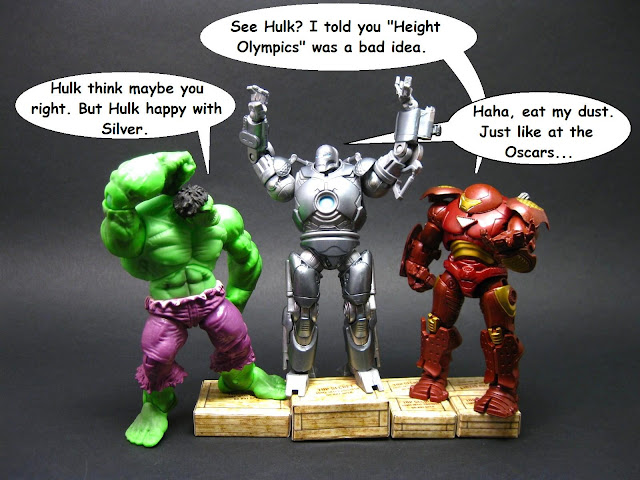 Posted by SirDragonBane at 2:14 AM