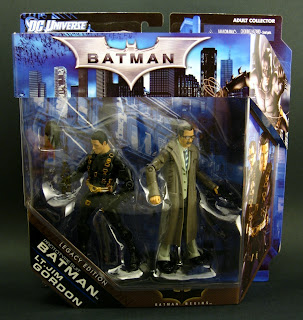 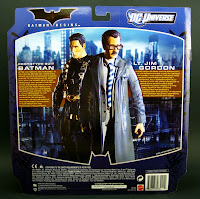 When I first saw this 2-pack, I knew I had to get it.  Comissioner Gordon?  Finally!  Looks like Gary Oldman?  Even better!  Christian Bale likeness?  Right on the money.  Accessories?  Check.  Articulation?  Looks pretty good from the preview shots. 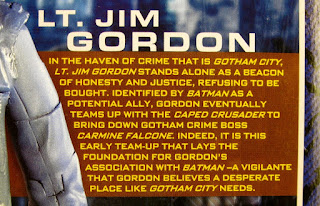 So what was a guy to do?  I put down a deposit for it (along with the Arkham City Bats and Two-Face 2-pack) and waited patiently for about 4 months. 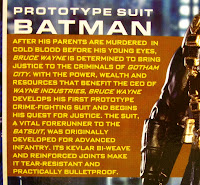 It's taken me a while to actually crack them open and take some decent shots and that's mainly due to their size?

Well, let's just say while I love the figures, they fall short.  Literally.

Check it out!
Posted by SirDragonBane at 5:48 AM 18 comments: 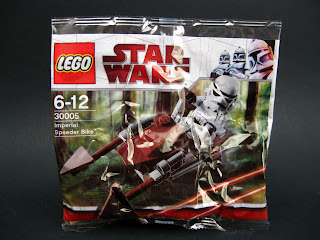 ...Which will be henceforth known as the "Great Lego Speederbike Blind Building Contest!"

So I picked two of these babies at last weekend's Singapore Toys, Games and Comic Convention for S$15 each, which was about half of what they would be in specialty stores outside of the Con.  And the fun thing about Legos is that Mel and I love to build them together.

Usually it's the bigger sets we work on together, like the Knights Kingdpm Green Knight Stronghold, the Star Wars Vader's TIE Advanced vs the Y-Wing, or the Home One MonCalamari Star Cruiser.

This time around, the Legos in question were way smaller and would take no time to build.  So the wife decides to challenge me to a "blind" building contest, stating that we'll "see who can build a speederbike faster without the instructions and just by using the pictureon the packaging."

I laughed and agreed.  I knew I'd win.  I knew Star Wars and Lego better than the wife.  But ya know, we musn't fail to encourage the spouses, even if they have a Tuantuan's chance in Tatooine.


Check it out!
Posted by SirDragonBane at 4:59 AM 9 comments: 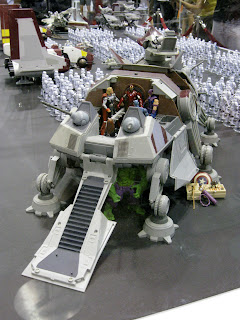 So I went into Day 2 almost desperate for some good toy deals.  As with any convention, the vendors start to slash prices in order to clear as much stock as they have probably so that they don't have to lug it back to theeir stores and re-pack all the stuff again.

After I got done with Sunday stuff like church and a meeting/rehearsal for this non-toy related gig I was gonna do, I drove down to STGCC at around 4-ish, 5--I thought that would give me a good chunk of time to wander about before the Con closed its doors at 8pm.

This time the wife and baby were at home so I figured I'd have a better chance of moving through the throng of people at the venue more easily than yesterday.  Well, I was right.  Not because I was able to unleash my superhero/ninja training I'd prepared for by reading comics most of my life, but because the crowd had thinned  somewhat for day 2.  Good news, because I'd be able hunt for deals better and also take in some of the sights.

And I gotta say, I kinda like being a Last-Day-Con kinda guy.

It's Con time again for us here in Singapore!  The last edition we had was barely 8 months ago--the dates for this year's STGCC got moved earlier to be more in line with the summer Con season in the States so yay for us!

Well, last year the Con was three days starting Friday but this year, organizers Reed Exhibitions streamlined the thing down to two days.  Though this seemed like a down-sizing and got the fanboy in me down a little bit, it proved to be the right move on Day 1.  Last year, the halls were fairly easy to move through because there weren't many people.  This year, everyone seemed to be there all at the same time!

The Rangerlord also pointed out that word had spread about the Con (in it's third year) and he'd noticed more people from neighboring countries and even further abroad attending.  My wife also agreed they'd done a better job of getting the word out--she'd heard news about STGCC on the BBC and they'd also gone on Channel News Asia for a bit of a promo interview spot.

Speaking of the Rangerlord, last year, I'd met up with him on Day 1 and we hunted for toys, comics, autographs, and other goodies.  This year, our ranks swelled as he brought along his two girls with his artist brother-in-law tagging along.  And I had Melissa and lil' Christian with me.  Needless to say, it turned out to be a great opening day!


Check it out!
Posted by SirDragonBane at 4:39 AM 9 comments:

Hey all, sorry for the long delay between posts funky work schedules and crashing laptops tend to get in the way of toys--what's wrong with this world?  ;P 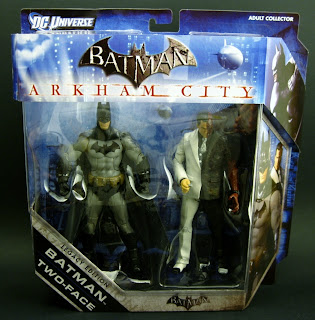 I suppose in that sense the wait for this review fits the toy--it's been a long time coming. 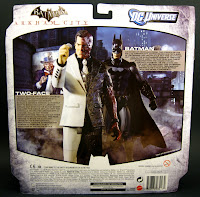 Way back in December, I had seen this two-pack on the pre-order list at the specialty store I frequent.  Immediately I put down a deposit for it and the Prototype Batman/Commish Gordon 2-pk as well (but that a review for another time...;p)  Both figures in this set looked awesome--A very classy looking Batman in gray and black, and a black and white Two-Face that would boot the orange and purple DC Universe one I had off my display and take its place a default Harvey. But when it finally got the goods in my hands, I was slightly disappointed.

Perhaps it was the long wait to finally get the figures, perhaps it was the slightly glossy finish both Bats and TF had.  But it didn't matter because I'd already put down for the 2-pack and it was mine so I was going to open it anyway. 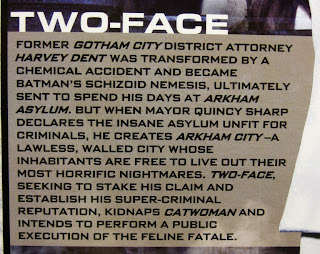 I felt slightly better about the figures when I busted them free but I discovered something else that I didn't like: the figures were too tall and largish to fit in with DCUC.  Hm.  Nevertheless, I was still game on giving the figures a chance, especially since they turned out to be excellently sculpted and painted.  After all, it couldn't get much worse, could it?  Well... 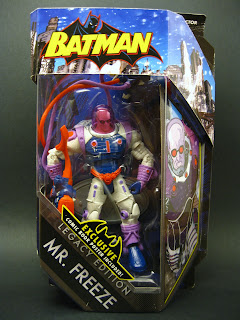 I was glad to finally get Mr. Freeze out of the latest Batman Legacy line--he was the one Bat-villain I had missed out on when I started collecting DC Universe and could still find some DC Superheroes stuff.  I'd seen the regular colored silver/blue/gunmetal-grey version many times but at prices which then seemed a tad too high.  So I waited... 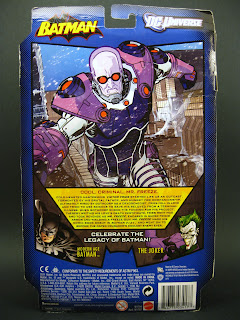 And he finally got re-released in this line...with funky colors.  But that wasn't gonna stop me from snaggin' ol' Victor "Burger &" Fries here, oh no.  While the unusual Super Powers color scheme puts most off, I think it's just about wacky enough to be part of a Bat-villain display, which already has a ton of color--purpli with Joker, Red and Black with Harley Quinn, Brown with Man-BAt, Neon Green with the Riddler--some pink couldn't hurt, right? ;)

Colors aside, there weren't any changes for the re-release of Mr. Freeze, who debuted in the 2003 DCSH line.  I have to say the paint apps then were quite something. There was another release at New York ComicCon 2007 that looked like this.  Less icy, more metallic.  So that would make this repaint of that classic sculpt more, um, strawberries and cream?  (Ice cream of course--no less.)

So if you've got your fruit smoothie in hand and you're ready to go, let's take a look at the latest release of one the (n)iciest, fruitiest villains ever, shall we?

Check it out!
Posted by SirDragonBane at 3:33 AM 16 comments: