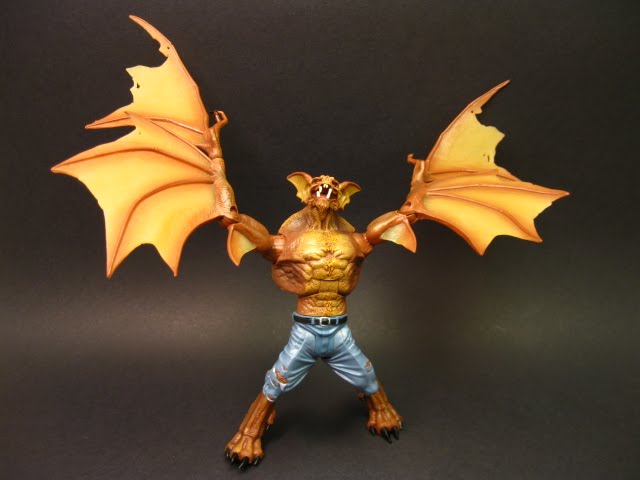 Look at how short his legs look in this shot! (I really don't know how I did that.) 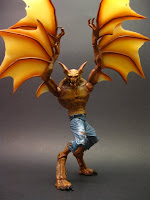 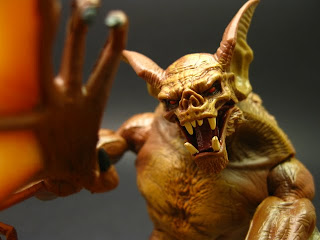 Some DC Universe Classics figures have the standard 23 points of articulation, sometimes even more if you look at the likes of Wave 9's Green Arrow.  But not all of them can pull off the poses you want the character to.  Enter the Man-Bat, who's only got 21 PoA but makes use of every joint and every inch of his recycled sculpt to look fearsome no matter how you decide to display him.

Check it out!
Posted by SirDragonBane at 5:51 AM No comments:

Attack on the Pit!

That's Toys R Us Exclusive GI Joe Rise of Cobra Attack on the Pit, to be precise. 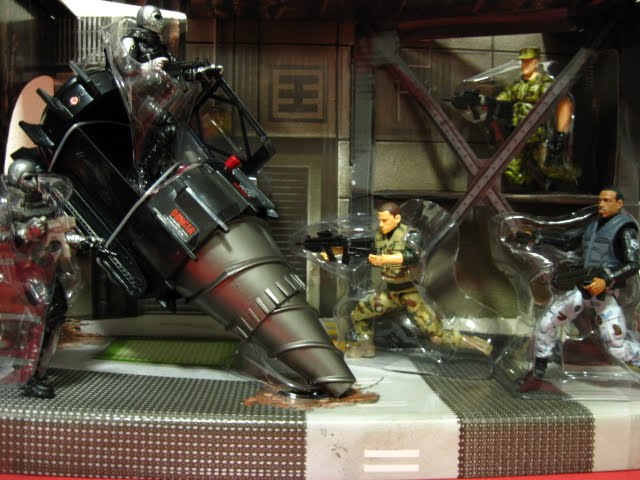 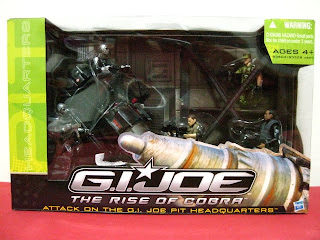 What's amazing about this 3.75" 5 figure + 1 vehicle set is that it never hit retail in Toys R Us stores here in Singapore.  So you can imagine my surprise when I saw it going on clearance in the major local department stores for just S$24.90, that's about US$17-18.  Now that's some crazy amount of discount on a movie scene set that retails for US$40-50 online.  And there's tons of them in the stores here.  So this just means that every Joe fan in or around Singapore just got lucky, myself included. 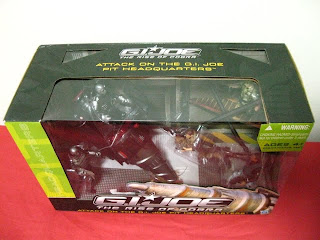 But put side by side with other sets in the Rise of Cobra series, such as the TRU Infiltrator 5-Packs (One with Duke and gang, and one with Zartan and 4 Joes), Attack on the Pit falls short of being great.  I mean, it's a really memorable scene from the movie but on it's own as a playset it seems more like a 'starter' set than an exclusive.  More after the jump!

Check it out!
Posted by SirDragonBane at 5:12 AM 3 comments:

DCUC Wave 10 Power Girl: The Odd One Out 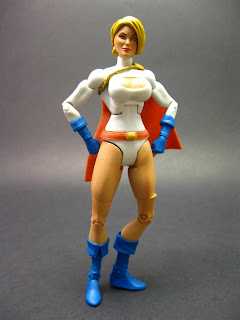 That's what comes to mind for me first thing--she's part of the Superman "family" but doesn't wear the big red 'S'.  Instead she's got, well, literally nothing for a chest emblem.  Ok, not nothing...but rather two whole lots of nothing. :P 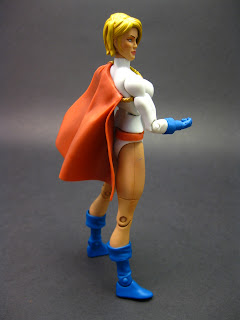 I had to get this figure loose on Ebay where not surprisingly, she's the most popular figure in Wave 10, more popular than even the sensationally accessory-laden clown prince of crime, the Joker.  That's based solely on price, where PG was the most expensive of the three Wave 10 figures I got (the other was Man-Bat). 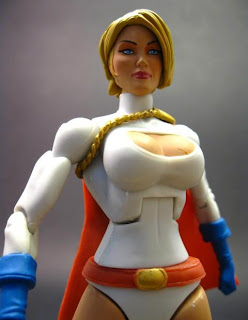 I have to confess: the first thing I did when I got this figure was to compare her torso with the rest of the female figures I had from the line like Wonder Woman and Hawk Girl.  And it's no surprise that Power Girl's is a new sculpt which is bigger in two specific areas. Yup.  Perhaps the extra cost in molding a new chest prevented other nicer add-ons?
But despite being disappointed at the lack of accessories (other than the Imperiex C&C, which I'm kinda meh/blah about, mainly due to the size of the complete figure), I've been pleasantly surprised by the overall integrity of the figure's joints, especially the new thigh/hip swivel/hinges.  It could be just that the fig I got was nice and tight but I'd like to think Mattel has improved on the quality of the line, especially since they've hiked prices.  Still, tight joints mean tight poses, and that's where Power Girl shines.

Check it out!
Posted by SirDragonBane at 2:51 AM 7 comments:

You know you're blessed when on your birthday you receive this from your wife-to-be!

Check it out!
Posted by SirDragonBane at 3:35 PM 2 comments:

I've had a super busy start to the year and the only recent puchases I've made were online with DC Universe figures, which were technically bought in December.

So having been too busy with work and being currently in reservist with the army (that's what all us guys in Singapore do once per year until we turn 40), I only managed to really take a trip out toy hunting just last night.  The only reason I did this was because Melissa happened to be in one of th department stores (for Singaporeans, that's Takashimaya) we frequent and saw that GI Joe Rise of Cobra figures were going for S$10 each.  That's like another three bucks off the pre-Christmas clearance price!  Mel calls me while I'm in camp and I say, "get me Cover Girl, Heavy Duty, and Breaker.  Those are the only ones I don't have (I think.)" 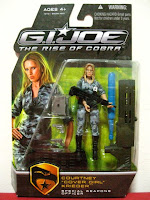 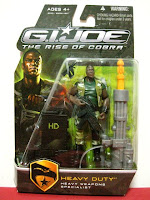 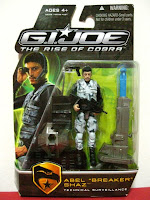 Now I had something to look forward to over the weekend before heading back into camp next week.  Oh, and she even got me ROC Combat Heroes Duke and Baroness, as well as Storm Shadow and Heavy Duty for S$3 each. :D

But that wasn't the end!

Check it out!
Posted by SirDragonBane at 4:55 AM 4 comments: 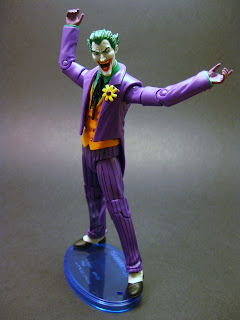 We all know the Joker as this hyper-active, over-imaginative, laughing maniac who has penchant for being criminally cruel.

Well, he's no different in his plastic form, the rascal.

But the Joker's definitely got to to be the pic of DCUC Wave 10 and perhaps even the last 3 waves before that.  Why?  Because he fulfills everything an action figure should have: he's got an excellent sculpt, a great paint job, and he's got accessories in spades. Heh. 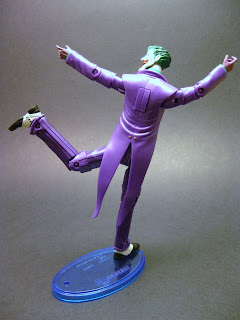 Although Wave 10 may be a Walmart Exclusive, it's readily available here in Singapore all the way in Southeast Asia.  The only thing is that you'd have to pay a premium for these 7 figures, anywhere from between S$290-S$500 (US$207-USS357).  That works out to be between US$30-US$51 per figure.  Considering DCUC retails for US$18 per fig, that's a huge, and I mean huge markup. So what do I do in my desperation to own the Joker, Powergirl, and Man-Bat?  Rely on the old faithful internet, of course! 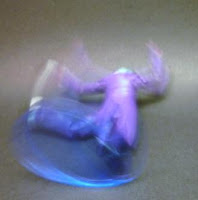 I was only interested in getting these three characters from the wave and I didn't really want the Collect and Connect Imperiex, despite him being a Superman villian.  Ideally I'd want them loose and complete with accessories (Ok, so Powergirl has none but as everyone knows, she's plentiful in other areas. :P)

*See how the Joker can't keep still, even in plastic form.

Lo and behold echobasecollectibles on the evil auction site by the bay, who had all of them going exactly that way.  And by the looks of it not many were interested to pay the S$27 I was willing to part with to get them loose.  So 10 days later I received a nice, well-packed and slim package that fit in my mailbox and there they were: Joker, PG, and Man-Bat, along with the Walmart exclusive 5-pack Two-Face and Catwoman.  All in all it only cost me $100 US including s/h.  For this I have to give a shout out to echobasecollectibles, who was not only honest on the shipping, but even took a hit with the s/h discounts he offered. Kudos, man. :)

So here's how the Joker turned out in review:

Check it out!
Posted by SirDragonBane at 3:25 AM 3 comments:

Starting Right From the Top!

How else better than to kick off the toy reviews of 2010 here on Chese Variant other than with the first letter of the alphabet?  That right, "A" is for ... 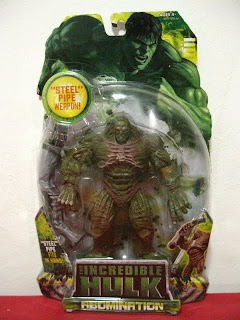 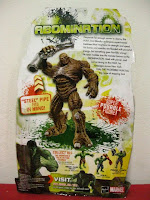 This 2008 movie line version of Hulk's nemesis is a beauty to say the least.  What a toy and what a steal at only S$5 (about US$3.60)! I only picked him up on Pre-Christmas clearance because I'd heard (or seen somewhere online) that he was sought after.  The amount of plastic used for this guy...let's just say this fella was heavier than expected in packaging, much heavier. 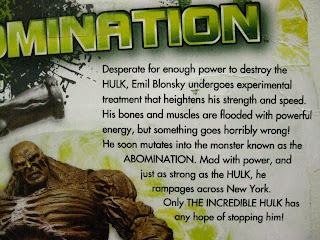 It's funny how they've treated this (I assume) dead Hulk toy line--we get 4 or 5 different Hulks (Mega Kick Hulk, Power Punch Hulk, Transformation Hulk, Mega Clap Hulk...I think those are the names. Or close to 'em....) But we get only one Abomination!  And he isn't even in scale with the Hulk!  The others clearly are meant to go with 3.75" figures, as evidenced from the Hulkbuster that comes with Mega-Kick Hulkand the Hulkbuster Hummers, which is right at home with GI Joes in it. Abomination is definitely in the 6" scale. 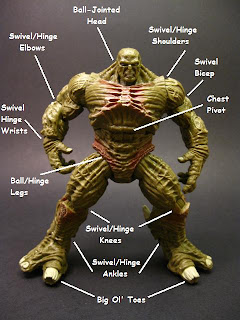 It also boggles the mind that A-Bomb here has 28 points of friggin' articulation, while the Hulks I mentioned above are lucky to even have half of what this guy has.  The only movie Hulk figure that matches up in terms of articulation is the Target Exclusive 2008 Movie Line Hulk (I think he's a 40th anniversary special edition too?). But as far as looks go (yes, I'm comparing the looks of the Hulk and the Abomination. Go figure.) A-Bomb here turns out to be the more movie accurate and proportionate.  Unfortunately, that Hulk has really long arms!

So click on the link to check out more pics as we talk Hu....er...Abomination!


Check it out!
Posted by SirDragonBane at 4:16 AM 3 comments: