The biggest toy convention on Earth is barely underway and already we have pictures of Marvel Universe figures from the near future! 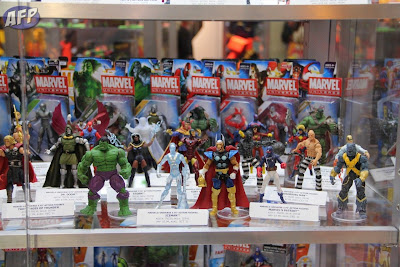 Courtesy of Ron via ActonFigurePics.com, it looks like we're all in for an even better year than the one we just had.  How is that possible? I dunno but the guys at the Marvel 3.75" division in Hasbro have outdone themselves once again!

So here's the plan--going just by the pictures (duh), I'll rate the figures in four categories according to degrees of anticipation for the figure:

And of course I'll say a thing or two about them because I just can't shut up! ;P

Once again, thanks to ActionFigurePics.com for the pictures--head on over there for lots more photos from the Marvel booth and more at SDCC 2011!

Let's start with the figure I'm most partial to: 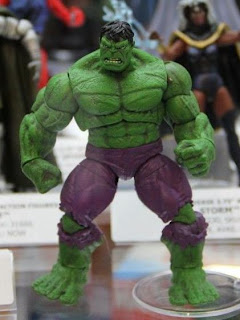 I'm a sucker for a good Hulk and this one looks great!  It looks like it'll be made with the World War Hulk base body which has excellent texture.  Featuring a re-tooled head, new fists, and new lower body in general, it's the "standard" Hulk that lots have been calling for since the very first release, which had poorer articulation, especially in the legs.

The things I'm most excited about?  The excellent head and the torn pants at knees!  Everyone who grew up in the 80s and tore their jeans on purpose knows what I'm talking about.  I think. ;) 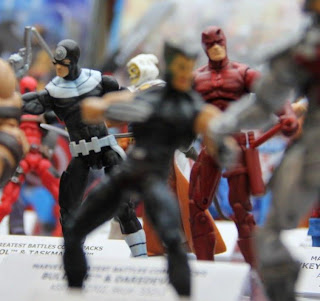 ...For those of us who aren't fans.  But I can imagine the likes of the Rangerlord being all over this like a rash. What am I talking about?  Why, the classic characters with slimmer, more athletic bodies!  Begone, beer bellies!

And what's that we see?  A new sheathe for DD's billy clubs and a ammo pouch for Bulleye!  Woohoo!

Still can't get into this pair?  How about... 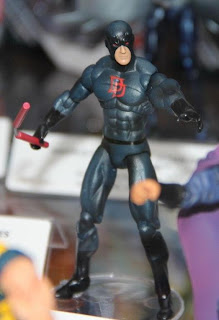 I really dig those colors!  And I have a real thing for variant colors.  Don't know when DD wore this costume but yeah, I may have to get him.  Problem is, he doesn't come with the new the billy club sheathe as the new Classic Daredevil! 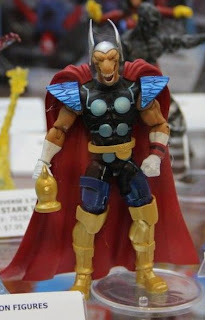 I don't much about the guy but the sculpt for BRB looks fantastic!  Besides, Thor doesn't have many friends to stand side by side with so he'll do nicely! 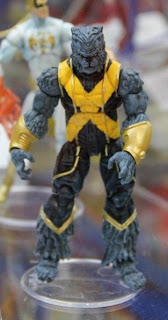 Just like Beta Ray Bill, Beast has a beast of a sculpt! The paint also looks great but apparently these are hand painted for SDCC.  Hopefully the quality doesn't slip too much from there.

Point of great interest: it looks like the front of his foot is articulated.  I count 4 toes, so perhaps he's got one more at the back of the foot that's also got articulation? 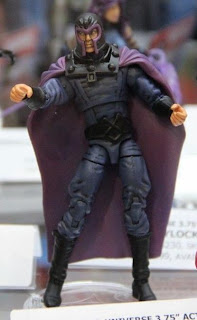 Magneto: Chompin' at the bit!!!

Up till now we've only had the Secret Wars old school version so finally, the long awaited update for the character is on the horizon.  That color scheme looks simply magnificent!  But here's an example of how Hasbro re-uses parts so well.

Head: Looks like a Secret Wars repaint.  The cape as well.  The rest of his body?  That looks like an AIM soldier repaint down to the belt.  But yet somehow the parts look like they were made of ol' Eric! 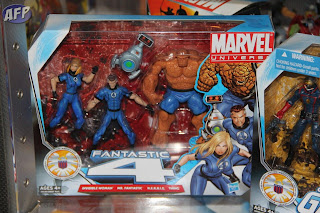 We didn't need a 4-pack, though I see how it could be hard to resist selling the Fan 4 as a 4-pack.  The only figure most would want would be Invisible Woman.  But I think I'll probably pass because I went for a dark blue Fan 4 instead of the light blue.  Give us our dark blue Sue! ;P  Oh yeah, and H.E.R.B.I.E: either he's cute or you wanna kill him.   As for the Human Torch, he wasn't included in this 4-packs because he went away to become Captain America. (*Baddumching*!  Oh, I kill me) 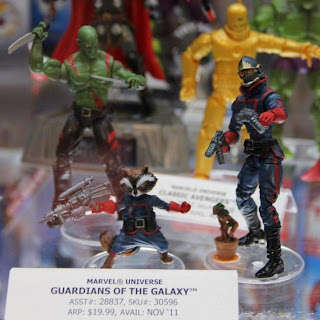 Guardian of the Galaxy: Definitely Maybe...

Who are these guys?  I don't know.  But a bipedal raccoon and a bonsai plant-man accessory?  Too cute to ignore!  I like the matching uniforms too.  Oh yeah , and there's also a green dude.

But what say you, GoG fans?  excited? 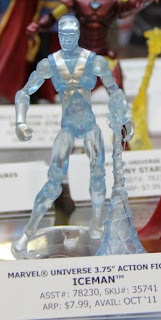 Very nicely translucent like ice, the other interesting thing about him is his silver "X" and gloves.  That's initially very interesting.  But the guy's got an old body and won;t go with Spidey and Firestorm.  Must have for X-Man fans, though! 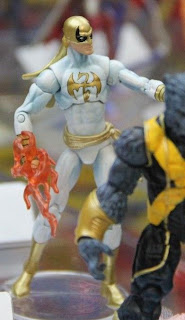 I'm fascinated with his alternate colors but in the end I might not wanna spring for him unless I see him on clearance or something.  This Iron Fist looks like complete repaint so pass for now... 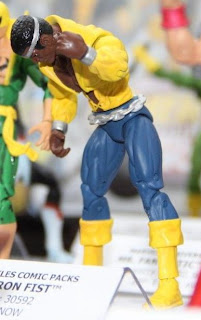 Marvel Universe figures with 'Fros don't do too well--just ask Thunderball.  The old "tall guy" buck also doesn't help.  Haha.  But Luke is also long overdue because we've seen Iron Fist out in the market for quite a long time now.  This Luke completes the retrolicious duo fer all you disco deprived diehards. ;) 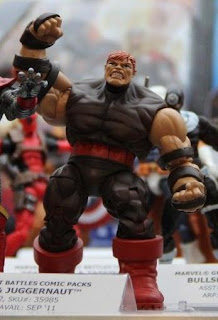 It looks like Juggy gets a darker repaint and a new head.  And while Juggernaut is an awesome figure, I don't know if it's worth getting him again just for his new mug.  And if the sale of Marvel Select Juggy is anything to go by, fans already know it isn't--the fully helmeted Select version sells out fast whereas the maskless one tends to sit on the shelf. 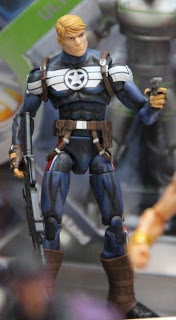 Steve Rogers: Chompin' at the bit!!!

Here's a guy I would get simply because of the head sculpt.  He makes any Captain America I have a maskless version with a simple head switch.  But the body itself is a newer one.  It's got thigh cuts and a waist swivel.  Something about the proportions of this figure strikes me as being just right.  Gotta love the harness and the weapons as well. But it's all about he face, oh, the face! :P 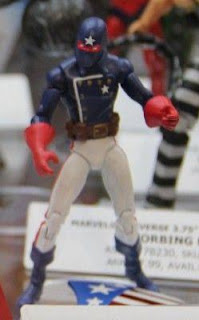 I really like the mask on this guy.  The rest of him looks like a Bucky repaint and he comes with the appropriate kite shield (at his feet).  It's kinda ironic because he'd probably make the best Captain America sidekick since Bucky has outgrown the role. 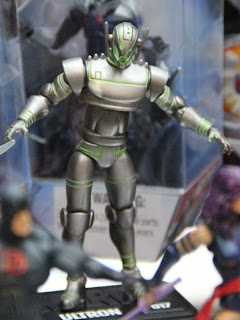 Again, a much needed update for a Secret Wars-only-so-far character.  I really like the head sculpt and the smooth surfaces of his armor.  The green eyes and grooves make the figure pop quite a bit! 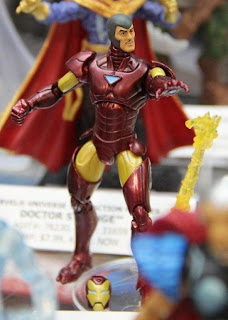 Another Iron Man?  And not with the "Modular Armor" sculpt?  Sure, he comes with the helmet-less head on top of the helmet but like Juggernaut, I'm not sure it's worth paying for a whole 'nother figure just to get an alternate head. 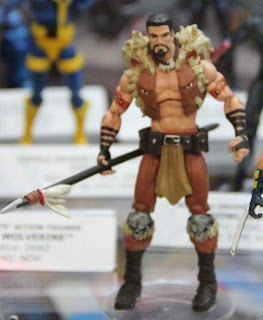 Wow.  If he weren't such a crappy Spidey villain and had thigh cuts, I'd definitely get him.  Just check out the tooling for his "mane", the eyes on the vest, the skulls on the knees, the belt and loincloth combo, and that face.  And he comes with a spear as well!  I think I might have just convinced myself to buy this guy.... 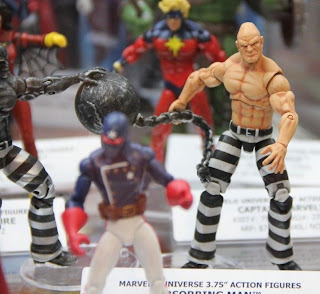 Why two rating?  Well, because it looks like there will be a steel-skinned variant!  The regular prison duds version looks like a straight repaint from the Secret Wars release.  But the "absorbed" version...Well ok, that's a complete repaint as well.  But check out the steel skin paint and the shiny silver and black pants! Yes, the latter is the interesting one...

A new head, a new cape and collar, and a some thigh cuts will make anyone take a second look.  Sadly I think he's one of those figures that only X-Men fans might go for without a second thought, important villain that he is.

All that's different from the Wolverine Origins release is the head with longer hair and perhaps shinier paint for his costume.  But it may not be that bad for those X-fans who missed out on the hard-to-find initial release.

It looks like the old "big guy buck" reuse for Simon Williams.  The head sculpt seems nice but it would be cool if he came with shades.


Although he's in that running pose, I'm not fooled by the reuse of the old slim body buck and its lack of poseability.  Quicksilver is a runner, so he's gotta have legs that can twist, turn, and kick high front and back among other things.  The costume also looks old school, so I guess he's set for a new version sometime after?  The god thing is he'll go well with Secret Wars Magneto.  Now all we need is  Scarlet Witch! 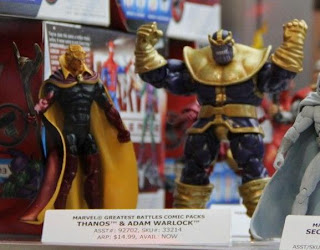 I'd be all over this 2-pack if I didn't manage to get my hands on the single carded Thanos.  Even then, this pack comes with a very coolly and darkly painted Adam Warlock and his staff.  He's also supposed to come with an Infinity Gauntlet that fits him!  I was previously going to pass on this set but after seeing this shot of Warlock, I'm very intrigued! 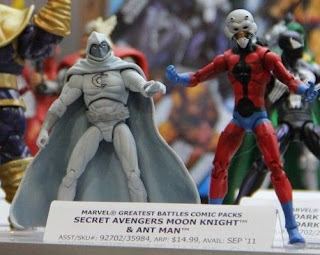 I've never liked Ant Man but i might get this pack for 2 reasons: The awesome looking helmet of Ant Man (and also his thigh cuts) and the fact that I never picked up Moon Knight previously.  This version of Moon Knight seems a little different though.  It looks like he's less white--he's got a gray mask, gray bracers, and a gray utility belt. Me likey.  Hopefully he come with at least his staff and Ant-Man has some sort of accessory as well, like not a giant ant. 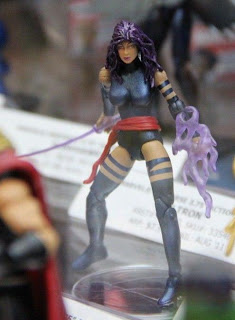 I'm still sad to see that they've not come up with a new female body sculpt.  In what looks like just a Ms. Marvel repaint/retool with a Jean Grey face and different hair, the 'Bro seem like they understand and have given Psylocke her Psy sword and Psy blast/fire.  If she comes with even more Psy stuff I'll b chompin' at the bit! 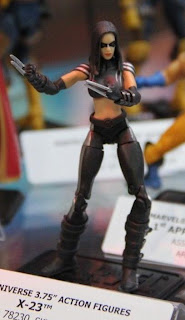 From one female superhero to another, X-23 is finally immortalized in plastic for all you fans of hers.  And guess what?  She's sporting the new female body we've all been clamoring for.  She's got beefier arms and thighs along with thigh cuts!  X-23's legs look kinda long in this pic and I can't wait till they start rolling out more female characters with these new parts! 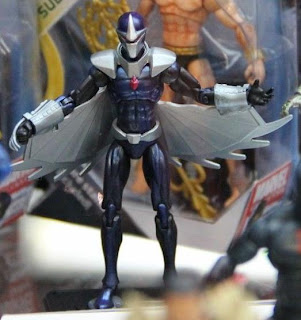 
For all his new parts, including his head and the wings, the shoulder guards and the collar, Darkhawk suffers from old school buck syndrome.  What does this mean?  He's an old figure with some mildly disguised parts and wings. :P 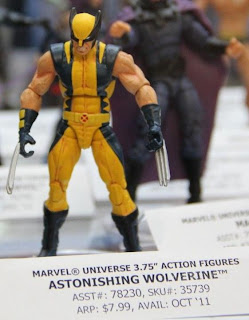 This is one character we really don't need another of. But he turns out pretty well.  The yellow is deep and the blue is also very dark.  Wolverine's got a sleek looking head, thigh cuts, and some beefy Wolverine arms, which I have to say is pretty darn close to my mind's eye of what his arms should look like. 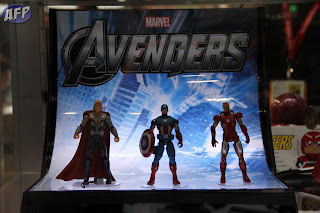 A new 3.75" movie Iron Man, Thor, and Captain America?  Well this looks like it's happening to facilitate the eventual move from the movie brands into the Marvel Universe brand.  Thor looks appropriately large, Cap's got a nice blue belt and some fancy boots, while Iron Man looks to finally be movie accurate.

**Once again, thanks to ActionFigurePics.com for the pics.  Check out their site for the latest stuff ongoing at SDCC.  There's way more stuf over there where they take some of the best photos!**
Posted by SirDragonBane at 7:31 AM