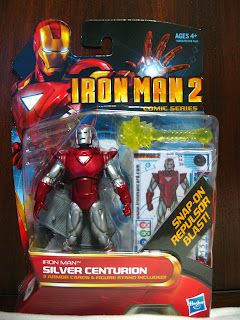 If you're in your late 20s to late 30s and got into comics when you were a kid, Silver Centurion Iron Man would probably be the first IM armor you were introduced to. 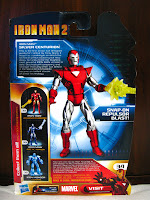 For me, I can't remember what Tony Stark was wearing when I first read a comic with him in it, but the distinct look of the helmet was what caught my eye--it wasn't the color for me, it was Iron Man's "face."  Then there were also his unique powers and weaknesses.

The suit had a Force Field, which he could polarize to generate magnetic attraction. He also was able to use the armor's sensors to create a "chameleon field" around himself; the armor's computer would analyze its surroundings and generate a hologram to make the armor blend in with the surroundings, making him effectively invisible. 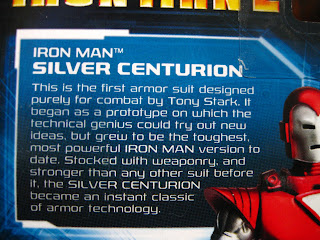 His weaknesses were the interesting bit: Silver Centurion was mostly solar powered.  He'd constantly run out of power at a crucial juncture and would need to recharge from electrical sources like a simple power point.  But if he couldn't find a power plug somewhere he'd be able to convert heat and cold to power the suit. 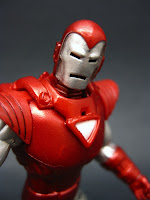 That was the Iron Man I remembered, not his colors, but his powers and his unique weaknesses.

It's also interesting to note that a copy of the Silver Centurion armor was used by Tony Stark to defeat the Mandarin, when his Extremis abilities were temporarily deactivated due to concerns with his mental health.

With all that going on, it would be hard to not recognize Iron Man no matter what armor he wore--the Iron Man visage had been burned into my mind's eye because of this armor.  And I didn't even like Iron Man back then! 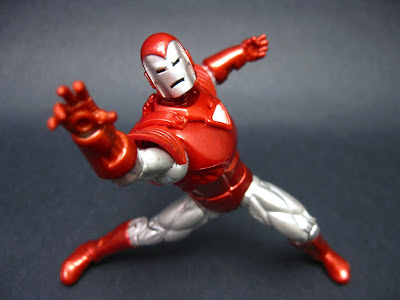 After having seen so many versions of Iron Man armor in the comics, and now the movies, looking back at the Silver Centurion suit really brings back a sense of a simpler time, when a more powerful suit of armor came with drawbacks that were just as powerful, and where some triangular shoulder guards meant a more kick ass modern look.

Placed side by side with the newer armors, the Silver Centurion probably looks out of style.  But as a toy, it shapes up like the classic it's meant to be.  More after the jump!

Check it out!
Posted by SirDragonBane at 4:36 AM 19 comments: 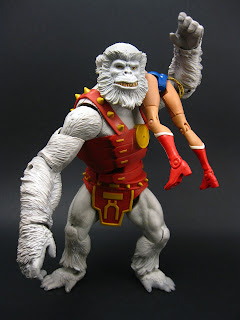 Yes, it's the elusive Walmart wave 14 and the even more elusive CnC figure, the Ultra-Humanite!

Ever since the wave was announced in ToyFare complete with pictures, there were only two figures I really wanted: Zatanna and ol' Monkeybrains here.  Ok, and maybe Alan Scott.  It seemed like it was going to be a tall order to get a build-a-figure without getting the figures themselves but what could one do? 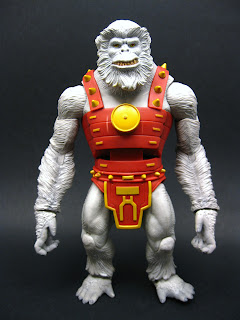 Well, just a couple of Sundays back, I ventured down to the local weekly toy "flee" market after missing it for various reasons over the past month or so.  And guess what?  He was right there.  And only for S$50! (That's a low, low US$39!)  That's right, just the CnC itself, no other figures that I didn't want attached. 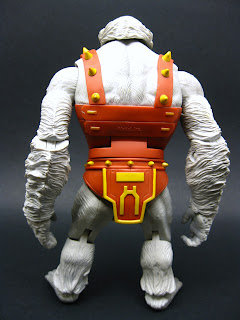 Yet, I didn't get him initially because he was the only one left and had pretty bad paint splash on the back of his leather costume.  So this weekend, I paid a visit to the market once more and what did I find?  My regular seller Dave (from the reputable Dave's Toylet, no less) had a couple more pieces on hand.  He told me one was scuffed pretty badly on the back his uniform so he'd only charge $45.  But thank goodness the other Humanite he had was in good condition and still gave me a further S$2 discount on that.  So US$37+ for one of the latest CnCs?  Hell, Yeah!

So the remaining question would be: where did these figures come from, and so cheap at that?

I can only think of one place: China.  Straight out of the quality control reject bin.  And while it's still a great figure, you'll see why it might have failed QC as we look at the ultimate smart-monkey himself (the Ultra-Humanite, not me) right after the jump!

Check it out!
Posted by SirDragonBane at 6:36 AM 8 comments:

So I moved into the new place in late October with my wife and we've been taking our time to get settled in and buying furniture and all that stuff.  So now with pretty much the basics in place, I've managed to get the "Den" set up!  Ok, so it's not a den, just a room in our new home.  But it's all ours!!!!!! Mwahahahahaha!

So what does it contain?  So far and most importantly, my new toy displays! 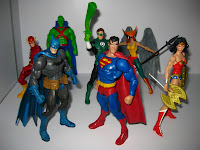 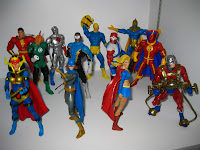 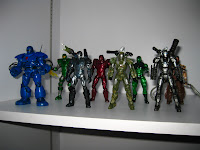 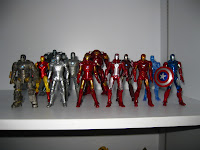 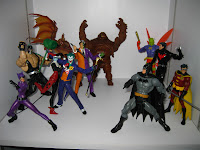 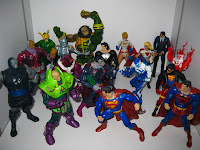 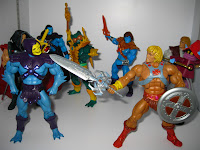 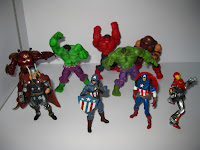 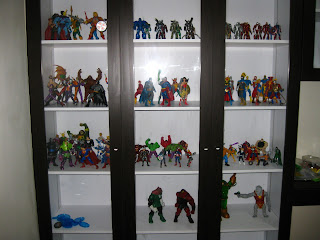 So while I like the spaciousness and the white backgrounds for real-life viewing of the display, I realize the shelves look quite bare in the photos.

But worry not!  I have lots more stuff to move from my old place and lots of unopened stuff as well!

If all goes according to plan, I'll be doing lots of reviews and continually filling up the shelf space quick-fast!

So I guess empty-ish shelves are always a good thing? ;)

Posted by SirDragonBane at 4:51 AM 9 comments: 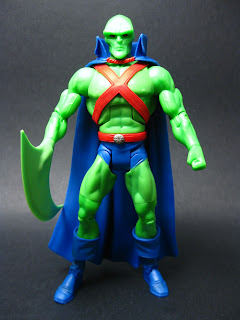 Yessssss!!! He's finally here!  The Magnificent Seven is finally complete!  Or not.  I have a Two-pack Aquaman (And Black Manta) on the way, but he's stuck somewhere in Canada...for now... 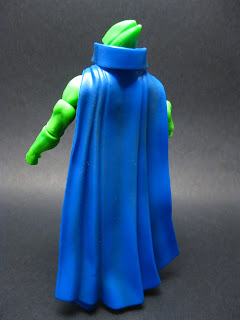 So we'll just use Hawkgirl as a stand-in for now!  Yeah, it'll be Justice League Animated Series Mag 7 for now. :)

I chose to get the variant version of J'onn J'onzz because he's be less "standard"-he'd have a pointy head, a chopper blade hand and be loads better than the human form version. 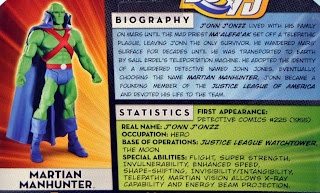 As the Rangerlord says, the classic Manhunter can be quite boring, depending on your taste.  But after having a gander at both, I realized that they were both equally ok, and that in order to have the complete Martian Manhunter, you'd have to get them both.

Why?  He's a shapeshifter, so having interchangeable parts like Plastic Man would be totally awesome.  But Ol' Stretchy Tights was a Comic Con Exclusive, meaning that there is no way Manhunter could be equally awesome, yes?  Well, yes and no.  And here's why...

Check it out!
Posted by SirDragonBane at 3:54 AM 6 comments:

*Hey all!  Sorry for the delay between posts--was out for my annual nation serving duties (read: army reservists) and was also in the middle of my move to the new place (read toy/gaming central. Lol wait till the wife sees this.)  We finally got the broadband set up today so here it is, the latest of my reviews.  Hopefully I'll be able to post more consistently now. :)
Cheers!
Ewan

***
You might be wondering, wait a tick, why I'm reviewing Iron Man 2 figures waaay after the movie that hit the theaters in May?  That's like six whole months ago.

Well, I'll tell you why:

1. This figure comes from a completely new wave of IM2 armors that contains many different new sculpts/re-use of later early wave sculpts that were fine-tuned to be better.

Still not convinced?  Well, I got three words and a picture for you: 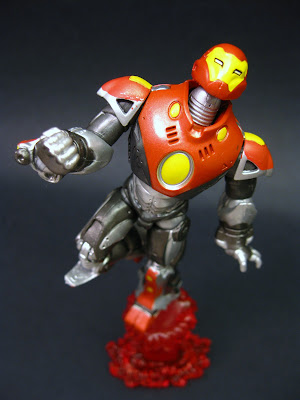 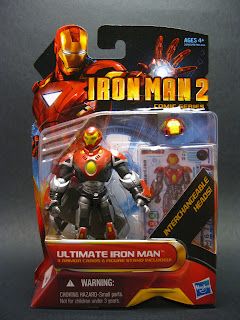 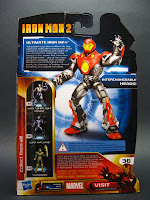 Now all you Ultimates fans (me included) can roll up your tongues from the floor, put in back in yer mouths (removed scraps of dirt etc. first), then shut those jaws and swallow.  That's right, remember to breathe...

For those of you who are not Ultimates fans, you still gotta admit that it looks like a pretty darn good-looking toy. 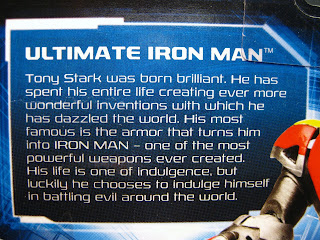 Still not convinced?  Not a "looks" person, you say?  Well then this guy's personality will getcha!  Ultimate Iron Man might not talk to me (despite my attempts to strike up a conversation) or anyone else for that matter.  But his character's appeal, brought to life by the superb Mark Millar and the splendid Bryan Hitch in the Original Ultimates Comic Series, is so cool that he might as well have a personality.

What do I mean?  Well, click on to find out!

Check it out!
Posted by SirDragonBane at 3:55 AM 29 comments: