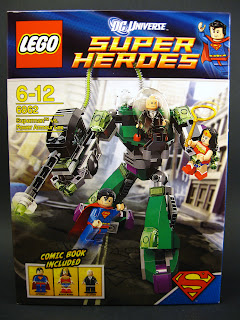 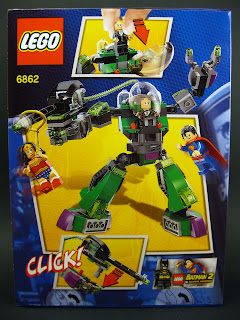 She's been getting me stuff early for special occasions for a while now, so I just thought to tell her that she needn't, and said that I feel bad for opening presents early and all that.  Her response: I need to get it for you before you see it and get it for yourself!  Hah!  The bonus?  She also got me the Batcave!!!  (Review to come...) 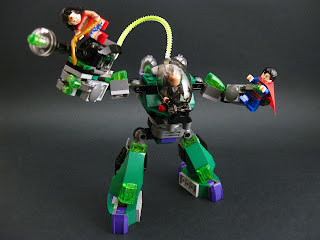 Apparently, this Supes vs Lex set won't be brought into store until next month here in Singapore, so this is a happy thing for me to be able to have and review it early.  That and the fact that I love Superman and the wife likes Wonder Woman makes me a happy 33 year-old kid.  Add to that the excellent looking mech that is Lex Luthor's power armour and this is a must-have set!

It's been a while since I really wanted badly to open something that I bought or was bought for me and review it, so what are ya waiting for?  Jump, jump, jump!!! ;D

Oh and watch out when opening the box--the parts come in three bags: two bigger ones and a small one for the little bits. There's also a Lego comic book and of course, the instruction booklet--but the cannon-to-power armour power cable for the Lex's mech is not in any of the bags but directly in the box itself.  So don't go throwing way the box with glee before checkin'! ;)

Check it out!
Posted by SirDragonBane at 4:24 AM 14 comments: