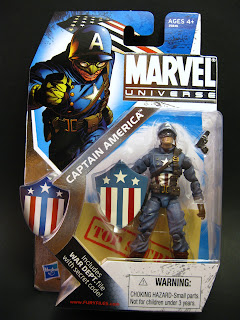 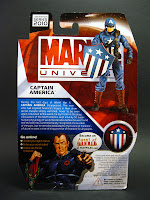 This is one of the figures coming out of Comic Con International this year that I was looking forward to getting.  And despite it being an exclusive to the Con, it came to Singapore real quick--specialty stores brought it in the very week SDCC was done (mine came in the Wednesday right after). 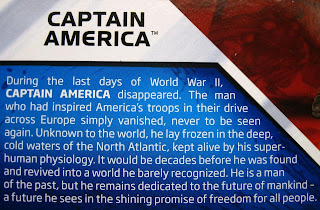 It was also not overpriced, being there or thereabouts the local retail of S$18.90 (US$13.50).  Well, I got mine from Toyrealm (awesome store, great people) in China Square Central for just under at US$12.90 and got it pretty early, so I was pleased. 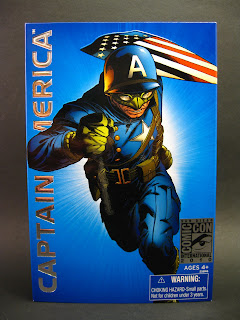 The larger departmental stores got them a few days later, ensuring that WWII Cap isn't going to scarce here for a while yet. (Last year's SDCC Frozen Grayscale Cap can still be found in abundance!) 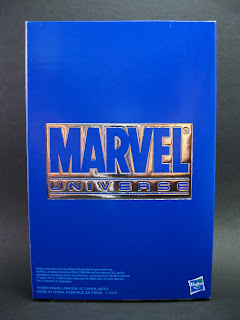 Looking at the pictures online and seeing it in package will already set alarm bells ringing--good alarms, off course, the ones that go "this is a must-have!"  Why?  It just looks that good.  And right after saying that the new Star Wars Vintage Collection Bespin Luke Skywalker might be the very best 3.75" figure ever, I'm forced to admit that this guy might just snatch the mantle from him!  Well, can WWII Cap take down Bespin Luke once out of the package?  Let me help you find out, just like I did after cracking him open! 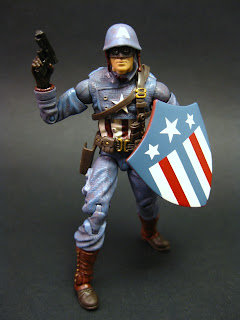 Like: That they pillaged the Ultimates for this version of Cap.  This design, drawn by Bryan Hitch and dreamt up by Mark Millar, originally appeared in their Ultimates series as WWII Cap.  Well I guess he's now the default WWII Cap of the Marvel Universe after other artists also tried their hand at drawing him (to great results) and because he's so easily recognizable as a superhero and yet still so solderish.  That's a great thing because this costume makes sense. 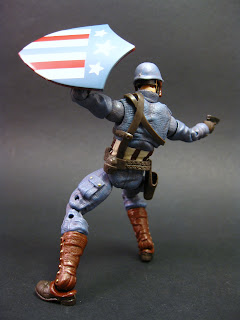 I guess back in the day artists had to draw spandex and use colors that were bright to the point of distraction before readers took notice, never mind that it wasn't even functional.  Well, not anymore.  We all love detail now, and that's what this uniform has--details.

Like: The detail! (Duh! :P) Just look at the folds, wrinkles, and criss-cross texture of his uniform!  Looks like leather, no? ;) Some of the washes and paint they have on him are also pretty phenomenal.  And look at those baby blue eyes.  How they even got any paint in there, and so accurately at that, is a wonder.  And check out the darker blue wash on his uniform.  It almost appears purple but somehow I like it!  It gives the uniform a rather out of the ordinary look, just like its super out of the ordinary wearer! 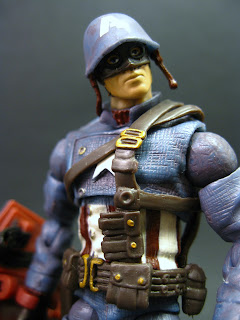 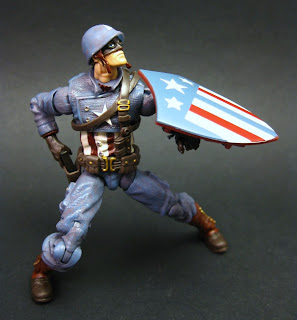 Like: His battle order harness and usable holster. Pouches here and there and everywhere.  That's where Cap keeps his cans of whupass--right in them pouches alongside the spare ammo. 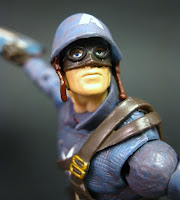 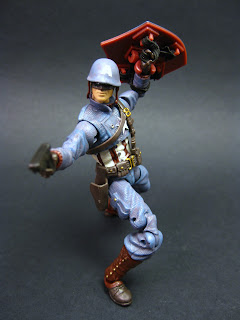 And they gave him a gun!  Yay!  Not that he needs it, but once again, functionality. He is a soldier, after all. :) 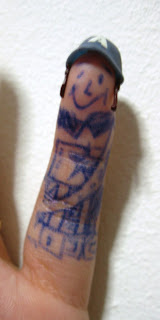 Like: The removable helmet!  And his headgear underneath.  Goggles and a leather mask that's even got straps on it!  Too cool!

The helmet also has straps, sculpted in a very devil-may-care unbuckled style so it's hanging loose.  Very war movie like, especially all those flicks about wars in 'Nam like Full Metal Jacket. Very real and very, very cool.

And as you can see, the helmet fits perfectly on the wife's Pinkie Captain America. Look at that detail!

Like: The articulation.  This has gotta be one of this figure's best features.  A swivel/hinge neck, swivel/hinge wrists, and swivel bootp tops + hinge/rocker ankles.  All on a 3.75" figure!  How do you beat that in terms of PoAs?  By adding the regular points of articulation that this line offers.  Captain America certainly delivers. 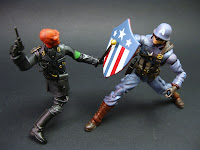 Like: The old school kite shield!  This goes so well with the character's costume.  A circular one would just look out of place for such angular, tough look. 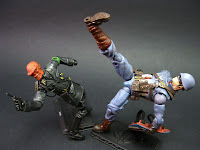 Dislike/Like: That he's taller than all of the other Marvel Universe figures.  Check out how gigantic he looks fighting the Red Skull.  I wonder if this is a result of using the super-articulated joints in his ankles and neck, or just simply an attempt to make him bigger than the "average" hero.  This is not necessarily a bad thing.  Cap is, after all, the First Avenger and therefore a little bit special. 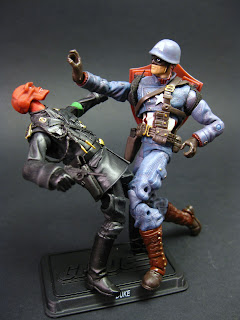 As it is, large figures like Juggernaut, Colossus and the Hulk are only slightly larger.  Having WWII Cap stand as tall or taller would really throw thing outta whack. But he isn't that big. He's still about 3mm or so shorter than Thor, while being about 5mm taller than Bucky.  He is slightly taller than the firat issue modern Ultimates Cap, but that because of the swivel/hinge neck joint, I suspect. 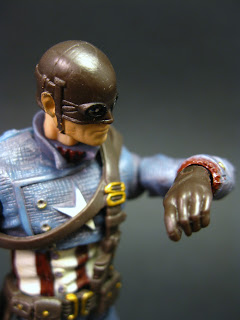 Dislike: His left shoulder: There's an issue with the joint here--as in the whole arm seems pegged into the torso slightly lower than the right arm.  That's not a problem for me because physiologically, humans are asymmetrical anyway.  And I think it actually makes cap look more real.  The problem comes in when the joint is obstructed, as it is with the swiveling of the shoulder on my Cap.  His arm can't come into the straight-out forward position unless I rotate it back first, press the arm close in to his side, then swivel it back up.  It's kinda like I have to make Cap go bowling just so he can stretch his arm forward.   Oh well, as long as his arms don't break. 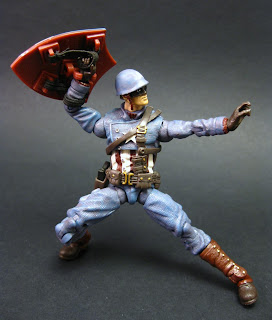 Dislike: That his left bicep swivel post is half way broken because of my fiddling!  Arrrrgh!!!  Oh well, at least now I know how to move his left arm around. ;(

What also gets me is that both his bicep swivels aren't tight, to the point that not only is the bicep loose-ish, but the arm below the cut-joint tends to slip out and reveal the glaring gaps between the arm and shoulder.  I have to keep pushing them in, otherwise he looks and feels like his arms are about to fall off. (Actually they won't.  I actually tried pulling it out and it's rather stable.  But it just looks that way.) 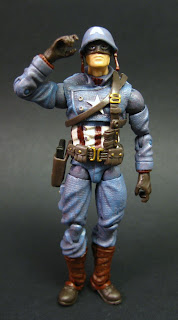 Dislike: That his right leg is longer than his left.  It looks like the problem area the part below his knee but above his boot top swivel.  It's minor, meaning that he has a tilt when both legs are straight.  But it works out fine once you bend the knee a little.  Like I said, humans are asymmetrical anyway. ;) Aesthetics: 10/10 - This is one damn good looking figure.  from the sculpted texture to the fold and wrinkles, to the wash.  Then there's the harness with all the painted gold buttons, uckles, and the sharply painted shield (with not a smidgen of paint error).  It's common to see 3.75" figure look great from a distance, but this guy just looks brilliant way up close as well.  It's a toss up between WWII Cap and Bespin Luke for best-looking 3.75" figure I know.  Heh. 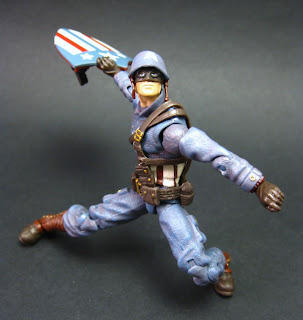 Poseability: 9.5/10 - He would've scored a perfect 10 if not for the screw-jam left shoulder.  Yeah, some figures end up with joints like Windmill Punch Adora, while others end up being like WWII Cap with his Jimmy-Jam Parry (in)action feature.  I can only hope that this defect is exception rather than the norm.  In fact, I hope my figure is the only anomaly so that everyone else can be spared the agony of the Left Shoulder Crock Block. 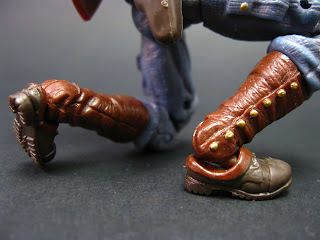 Fun: 8/10 - This is the category that takes the hit for his poor shoulder assembly.  We all have been in the position where one screwy joint just takes the fun out of all the other 99 perfectly functioning ones.  His right leg is also a small problem because he can pull most any action pose, but when it comes to standing at attention, it's a problem for Cap!  In fact making him come to attention was one of the more challenging shots! 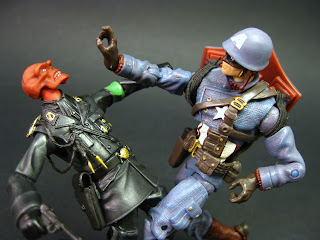 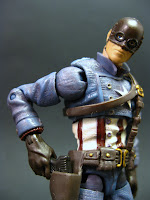 Still WWII Cap is great at what he does, and that's striking a pose!  If action figures had supermodels among their ranks, ol' Stevie boy here, with his height and PoAs, would be the star (and stripes) of the bunch.

And you can pretty much get any martial fighting pose out of this guy so I can't deny that he's still a ton of fun to have, especially with his removable helmet, handgun, and of course, the mighty shield! 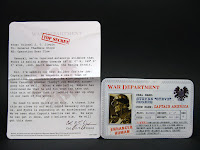 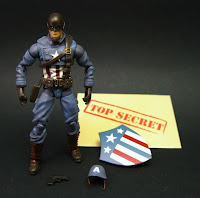 Value: 10/10 - For a San Diego Comic Con Exclusive being sold at retail price is definitely worth it.  coming from this part of the world (Southeast Asia), I almost always expect to pay a premium for an exclusive, much less one from Comic Con.  And when you factor in shipping, it can be a small fortune for something as tiny as a 3.75" figure.  But thanks to Hasbro offering these Exclusives to retailers in these parts for a good price (I assume), they are readily available to Asian fan-boys like meself. 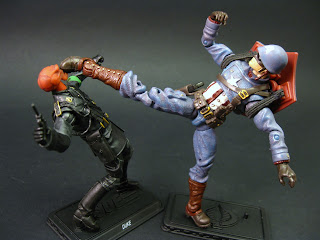 Availability aside, when you consider that Marvel Unverse figures are never as pimped out as their GI Joe or even Star Wars counterparts, WWII Cap, with his helmet, harness/holster, handgun, and shield make for a pretty sweet deal.  Throw in the H.A.M.M.E.R File and ID card and this is one helluva worth it toy.  Thing is I think the price on this guy will drop further, if evidence of Frozen Captain America from the past year is anything to go by.  That guy can still be found is is going as cheap as US$7 in some places. 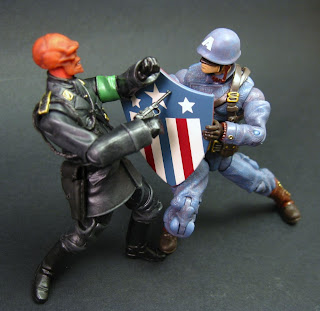 But unlike Frozen Cap, if WWII does go as cheap, I'll be picking up a bunch.  Can anyone say custom bait? :D


Overall: 9.4/10 - There are not many toys I'd be tempted to get a second one of, but SDCC 2010 Exclusive 3.75" Marvel Universe WWII Captain America is one of them.  Hasbro have out all the best parts of a figure in this scale into one package--he's got the swivel/hinge neck, the swivel/hinge wrists, and rocker ankles to go with the superb range of his hinges there.  Needless to say I'd recommend getting him.  I'd say get at least one of him, then get a second and swap in a GI Joe Duke's for a maskless version.  Then you can get a third for shits and giggles (and that MOSC value if that sort of thing is your bag, baby.) ;) 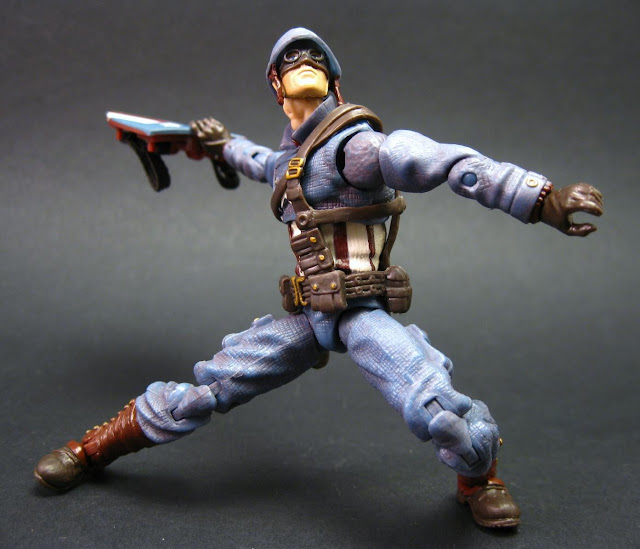 Posted by SirDragonBane at 3:21 AM