**State of the Toy Union: My display room's a mess!  It's made me really not want to open up any of my recent purchases until I get it cleaned up.  I'm making progress with the packing/tidying up though.  So in the meantime, I'm very sorry for the long pause between reviews.  Enjoy this one though--he couldn't wait! ;)** 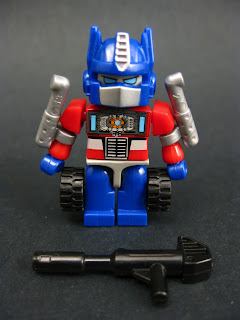 Call him an SDCC, a Botcon or a (insert your preferred)Con Exclusive, but for us here in Singapore, he's our Transformers Con 2012 Exclusive Kre-On! (That's what they call a Kre-O figure btw).

That's right, in a month's time from March 11th to 14th, the bi-annual event is hitting our tiny island nation.  So the awesome people in charge sent over this little fella just to whet my appetite!

Now the idea of building a Transformer out of Legos or any other building blocks is hardly a new one because anyone who's ever laid hands on such toys will have at one point or another tried to do it.  But never has there been an official toy company who's gone out a produced a whole range of them--until now. 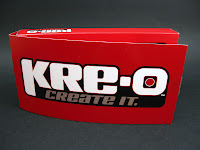 And while I have to admit that I was pleasantly when I saw Kre-Os on the shelves in stores, I was less than impressed by the sets.  First up, the robot modes aren't all that accurate to the G1 TF forms they were trying to mimic (and neither are their vehicles modes for that matter).  Second, they came with Kre-On (minifig) versions of themselves.  And that doesn't really make sense, if you catch my drift.  Third: the price. At US$30 a pop for the bigger sets, it was kinda hard to go out on a limb and trust the quality of a new building lock brand. 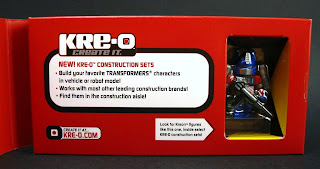 Still, those Kre-Ons looked pretty darn cute.  And they do have a whole range of them out right now--Optimus, Bumblebee, Mirage, Sideswipe, Megatron, Shockwave, and Prowl, just to name a few off the top of my head.  I had even told the Rangerlord what many have expressed online--if they sold the Kre-Ons separately, I'd grab 'em.  He agreed too.

So you can imagine my delight when the organizers of Transformers Con 2012 sent me this little package.  Now I can't wait for the Con to come.   So I guess I'll just have to settle for filling the time with a review of Kre-On Optimus Prime! ;)

Check it out!
Posted by SirDragonBane at 3:46 AM 14 comments: