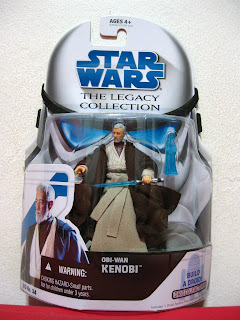 This is the story of how Obi-Wan Kenobi became my favorite Star Wars character...

Ok, so maybe not that long ago, and not very far away at all, I was young, and I liked Luke Skywalker.  Who didn't?  After all, he was the saga's protagonist and the "boy done good," who comes into his own, confronts his fears, and in the process saves his father and the known galaxy. 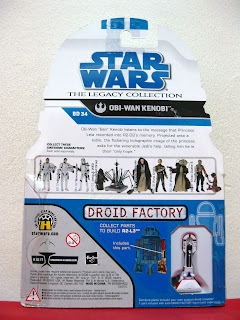 But then came the Prequel Trilogy, which was to shed some light on the past and in particular, one young Obi-Wan Kenobi as he came into his own.  We all cheered when he cut down Darth Maul but by the time the second movie was done, the only thing I could think of was why the hell would any Jedi think wearing a mullet and a trimmed beard would look cool? It didn't help that young Anakin was annoying and Obi-Wan couldn't stop sounding like he was annoyed with him.  And how the heck was he defeated by an old human Sith Lord when he'd previously sliced up perhaps the fiercest villain in the Prequels (Maul)?

Ok I admit, I had a soft spot for him going into the movies because Obi-Wan was played by a dude named Ewan McGregor.   And by having the same name, I felt compelled, probably by the Force, to like him as a character. I sure didn't.  I liked none of them because they were all one (or less) dimensional.  But I did like the Original Trilogy Obi-Wan.  He was everything the old and supposedly wise Jedi in the prequels weren't.  Patient, using his power only when absolutely necessary, accepting of his fate and of course, heroic. Everything a favorite character should be. :) 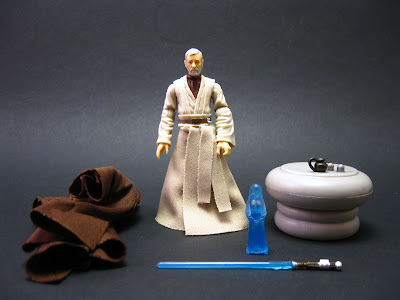 So that's how I came to think of old Obi-Wan as the guy I wouldn't mind being in the Original Trilogy.  Except I'd try harder to kick Vader's ass.  Except I'd run when I realized I was defeated, only to come back for a rematch.  Except I'd take out the Death Star instead of just bringing down its shields.  Except I'd show that cocky Han Solo guy I can pilot his piece of junk spaceship. Yeah, I'd be more "excepting" of my power than "accepting" of my fate. Har.

Thus, I've had this figure in packaging since I got him when he was first released and the Rangelord, who is my advisor in all things from the galaxy far, far away, said that this was the ultimate Obi-Wan.  Those word were never spoken more true. So click on for the details!

Check it out!
Posted by SirDragonBane at 2:13 AM 4 comments: 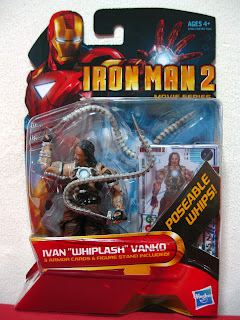 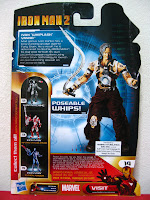 "Hey meine, I vant MY borrd," he said as he slammed the table.  Gotta love Mickey Rourke.  Gotta love Ivan Vanko.  Gotta love Whiplash despite him being a rather one dimensional character.

But nonetheless, he is one of the reasons the movie was so popular and will likely be a hot seller when it's released on DVD soon. (Next month?) 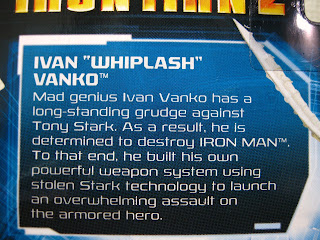 Anyways, being able to get hands on this figure made me really happy because he's the only helmet-less character they've made into an action figure so far in the 3.75" Iron Man 2 line.  There'll be more to follow, but I suspect this will be the only verison of ol' Randy "The Ram" Vanko we'll see.  I personally want a fully armored Whiplash from the climax of IM 2, but nothing's been announced about that yet...

So in the meantime, sit back, relax, and click on over to Articulated Discussion for the latest in my Iron Man 2 reviews!


Posted by SirDragonBane at 3:56 AM No comments: 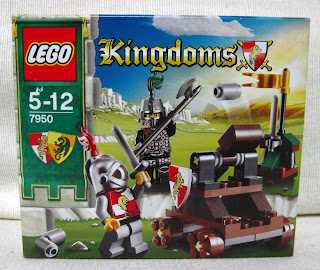 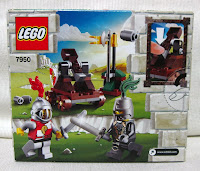 What a breath of fresh air this new "medieval knights" Lego Kingdoms line is!  It's Lego but not branded with another license like Star Wars, Toy Story, or Prince of Persia.  That means it's cheap, cheap, cheap--just the way I like it. Ok maybe not that cheap, but cheap enough to be reasonable at retail (which is about a good US$3-4 cheaper for a mini set like this, US$7-8 if it's a Star Wars set.) ;)

But what made this set awesome was the tag team discount haul the Rangerlord and I did at local toy store Simply Toys.  Since they had a buy one-get-one-at-40%-off deal, we both snagged this set and the next larger one, #7949 and split the discount.  So we both got 20% off overall.  This one ended up being only just over S$11 or US$8.  Lego hath never been cheaper!

So how did they size up once busted free of their cardboard prison?  Let's take a gander...

Check it out!
Posted by SirDragonBane at 6:19 AM 5 comments: 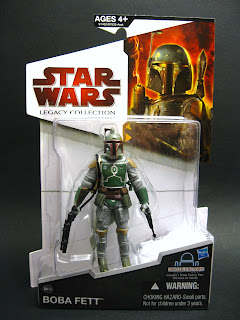 When I was a kid, there were only good guys and bad guys.  And Boba Fett was a bad guy, dangerous and mysterious.  That's all I knew about him because I was too young to know what Bounty Hunter was.  I already had too much evil to handle in the Star Wars universe with Vader and the Emperor running around Force choking/"lightening" guys to kingdom come. 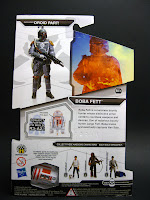 Looking back, Boba Fett's helmet was what intrigued me the most.  It wasn't as scary as Vader's but it was equally, if not more, mysterious, hiding the character's face and the whole history of how he came to be along with it.  The fact that he was always silent deepened the sense of mystery. 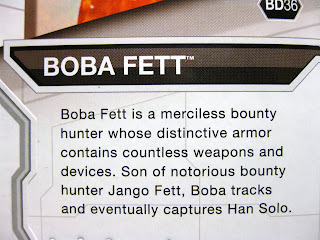 I'll always remember the nod he afforded Boushh in Return of the Jedi after the latter activated "his" thermal detonator while in negotiations with Jabba the Hutt.  One nod, just to say, "I like your style." 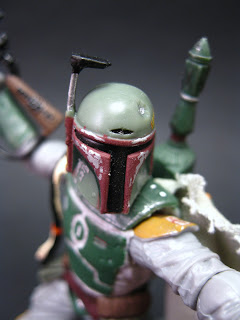 One nod that revealed so much about Fett to the audience.  One deadly nod to say, "Let's see if you're as deadly as you claim to be, if you are who you say you are."

Well, this figure is able to recreate that mysterious deadliness with its design.  But that's never been a problem with the vast majority of Star Wars figures--they've got the character's appearance down pat.  What this figure can do is move and pose like the classic Boba Fett.  And as an added bonus, we get to see what he looks like under the helmet!!!

Check it out!
Posted by SirDragonBane at 3:10 AM 9 comments: 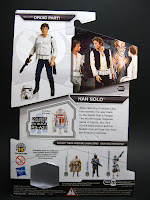 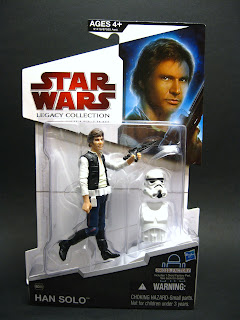 The sneaky bastard.  Who does he think he is, running around the Death Star in his Storm Trooper armor disguise. He's Han Solo, of course!  Good ol' Harrison Ford himself some 33 years back. He just turned 68, so happy birthday, Han! 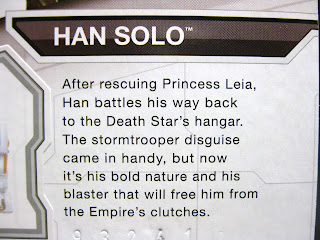 So does this latest 3.75 inch release of everyone's favorite scoundrel do him justice?  It is, after all, the first figure of him with a Storm Trooper utility belt, so it's gotta be good, right?

Check it out!
Posted by SirDragonBane at 5:26 AM 5 comments: 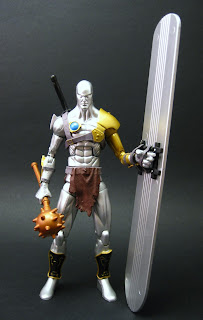 This was the other figure I wanted to get after King Hulk when I read the Planet Hulk story arc.  It's another figure that captures a character in a certain period of time in his costume, and yet is instantly recognizable.  And this version of the Silver Surfer is so awesome that they had to change his name to the Silver Savage. 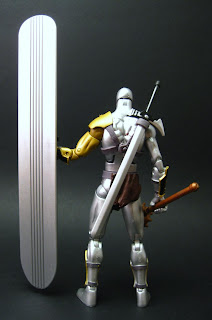 Perhaps it's also the way he's introduced in the story--we so into the Hulk's journey that we don't even think about what other characters with interstellar means of travel might show up.  And the Surfer/Savage is perfect for the role of reigning champion of the gladiatorial arena on Sakaar--until the Hulk shows up. ;) 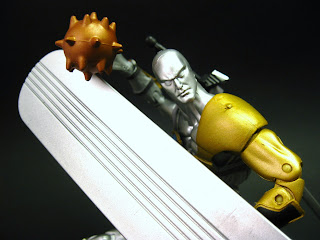 I guess I put off getting the Silver Savage until a week ago because he wasn't part of the Hulk Series "wave" and because I always found something else to buy ahead of him.  But I'm glad I found him loose at the local toy "flea" market from the very same guy I bought King Hulk from 18 months or so ago.  And for how often I don;t see this figure any more, I felt S$22 was awful reasonable for him.
So here he is in all his silver glory!

Check it out!
Posted by SirDragonBane at 3:36 AM 7 comments: 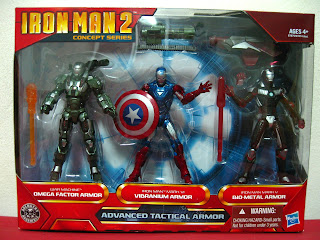 That's right, an in depth look at this figure minus his two K-Mart Exclusive Advanced Tactical Armor pack-mates.  Why?  Because I don't have them! The Rangerlord gladly took them home after we split the set and their now nestled close to him under among his sheets. :P 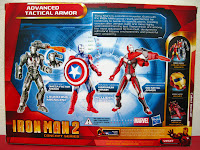 Seriously though, I'm glad we split it because I wasn't too into the Mark V repaint/remolded Bio-Metal Armor Iron Man, while I wanted Recon War Machine in camo colors more than I wanted Omega Factor War Mack, cool green and all. 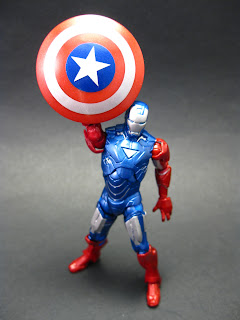 As for Vibranium Armor Mark VI, I have to say: I rarely go for straight repaints.  But because of the idea behind it (Concept Series FTW!), I was sold.  Oh and it comes with a spiffy shield.  And I'm sure as you all know, you can't have too many Captain America shields!

Well to check out my review, head on over to Articulated Discussion!


Posted by SirDragonBane at 4:51 AM No comments: