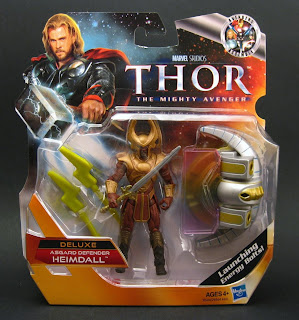 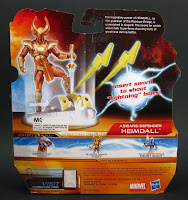 The airport.  That's where you find some of the best toys.  I figure it's because the planes reach there first (genius at work, I am) and because though so many people pass through, they don't always think to stop and look for a toy store there. They're just passing through.

I know a guy who uses airports a lot (though he'll claim he travels by horseback or Pegasus) but he doesn't just pass through.  He surveys.  He stalks.  (He texts me.)  He swoops.

And Heimdall is his latest quarry The Rangerlord found for me at the Kuala Lumpur airport in Malaysia.  He's such a great guy.  He also found me three other figures of a certain Asgardian ilk that I'll be reviewing soon, hopefully.

But in order to get into Asgard we have to pass the gatekeeper.  And the gatekeeper's name be Heimdall!  So Haimdall, may we pass?  Heimdall?


Check it out!
Posted by SirDragonBane at 4:53 AM 2 comments: 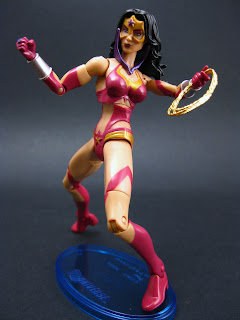 Most of fandom is kinda outraged at Wonder Woman's recent costume change from the classic look to the blue long johns. Well ok, mainly people dislike it, with a few fans lukewarm and even less saying it's a good look.  But I know one thing's for sure--if Wonder Woman had ditched her old costume for the one she's wearing on this figure, all of you would've approved.  Well, most of you anyway. 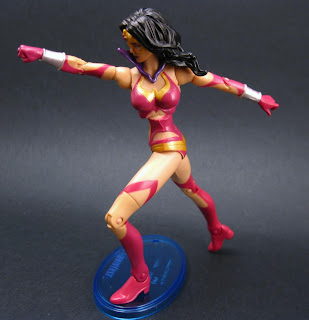 Yes, Star Sapphire Wonder Woman has even less on than when she isn't championing the pink light of passion.  And while it may make some of us bleed from the nose and smoke from our ears, you can only get a good look at photos and read a review right now, because Wave 17 has another 2-3 months before it hits the stores.

But is scantily-clad-pink-Diana-Space-faring Wonder Woman worth the investment?

Check it out!
Posted by SirDragonBane at 5:21 AM 4 comments:

Boy that's gotta be the longest name for a toy I've reviewed yet! 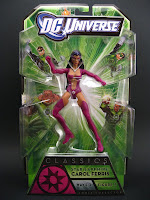 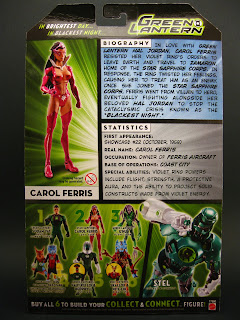 So Brightest Day has just ended with the ***Spoiler Alert*** return of Swamp Thing and John Constantine to the mainstream DC Universe. ***End of Spoiler***  But the DCUC figures of Blackest Night Characters have only just hit the shelves last month.

Well, I just managed to get my hands on the complete Wave 2 of the GL 2 Series and what a wave it is!  Pity it'll be the last totally Green Lantern themed wave.  The great thing?  We get some brand new characters for the DCUC line!  And Carol Ferris is one of them. 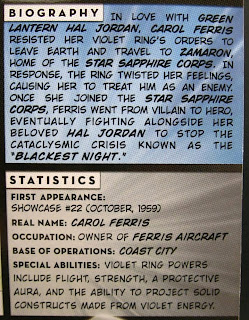 So how well did Star Sapphire turn out?  Head on over to Articulated Discussion for the review!


Posted by SirDragonBane at 6:14 AM 6 comments: 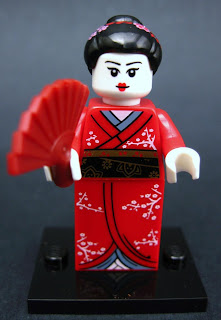 I originally didn't intend to get the Kimono Girl.  The Rangerlord wanted her but not me.

I had stumbled upon boxes of series 4 late in the game and already the minifigs I thought were going to be rare were sold out.  At least according to the friendly salesperson at the specialty Lego store I was in.  So I couldn't get the Musketeer, nor the Mad Crazy (politically correct) Scientist.  And I couldn't find her either for the Rangerlord.

But I snapped her up the moment Rangerlord and I chanced upon her at Toys R Us/  She was, after all, a sought after figure in the initial boxes that came into stores locally.  RL already found himself one, of course.  For the girls (aka his daughters). ;)

Of course, I too couldn't resist. It would go well with my Ninja and Samurai from the previous waves, he said.  We influence each other too much.

Check it out!
Posted by SirDragonBane at 11:49 PM 6 comments: 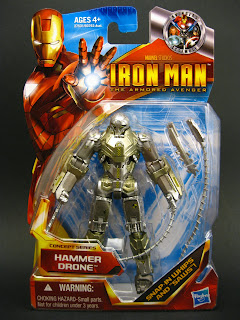 A little more than a year of banishment from Articulated Discussion, I'm back with a review! 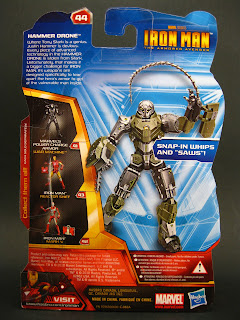 Why was I banished, you ask?  Because I was on the losing side of the war for AD.  In an attempt to seize power from the The Articulated One (TAO), Dr Nightmare and his Nightmare Horde descended upon the unsuspecting monarch and a fierce battle ensued.  TAO called his banners, and I answered.  But in a cruel twist, the Original Wes threw his weight behind Nightmare and betrayed the good king.  We were beaten. 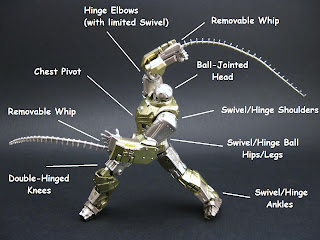 My punishment?  Well, I was banished to the darkest corner of cyberspace to endure an indefinite sentence of hard virtual labor. 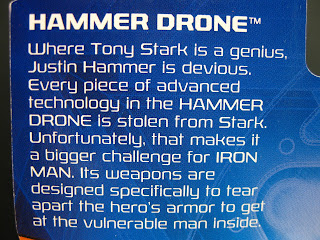 I swore I wouldn't crack under torture, but after more than a year of repeated online starvation and email whipping, I gave in.  I was to now serve out my sentence in the Night Horde as a grunt reviewer with no food or pay for the rest of my life.  I also get to call myself a lowest-level Nightmare Minion.

So here is my first review back and wouldn't you know it, it's an Iron Man 2 figure in Armored Adventures packaging review.  It's like the rebel in me will never die. Lol.  More at Articulated Discussion after the jump!

Well, it's a regular Flee Market Sunday down at local toy hub here in Singapore and I'm thinking about not going because I'd woken up late.  The baby was a little restless and kept us both up the night before.  Also, I'd just have maybe over an hour of browsing time before I had to head back towards home for Church.  I also was reluctant to leave the wife and son home alone for to long--I guess I'm terribly fond of them both.;) 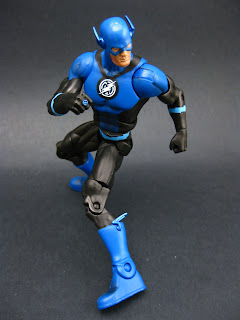 But having freed all my unopened my Justice League stuff from their plastic prisons and set 'em up nicely in one of my smaller cubby hole shelves, I was inspired to look for the missing figures I'd forgotten I didn't have.  Guys like the Question, Ice and Fire, Galatea, and most of the bad guys.  But what I found instead was that DCUC Wave 17 (The deputy Blackest Night Lantern wave) had hit the stores. 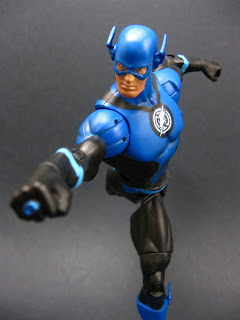 Well, actually, the loose figures had.  And they were more like tables than stores, really.  Yes, those figs that don't make QC had reached the hands of those regular flee-marketers. And not being particularly keen on the Anti-Monitor Collect n Connect figure, I jumped at the chance to get Blue Lantern Flash and Star Sapphire Wonder Woman for S$12 (US$9) apiece!  I'd also have gotten the rest of the wave loose but those weren't anywhere in sight.  But I also did manage to snag myself a shiny Hal Hordan from the Hal vs Thaal Sinetro 2-pack, as well as a spare Skallox for when my DCUC GL Wave 2 comes in this week (So I'd have a spare body for Night-Lik.)

So how did (QC fail) Blue Lantern Flash turn out?

Check it out!
Posted by SirDragonBane at 11:18 PM 6 comments:

5 long years after the last episode aired, I've finally gotten off my lazy ass and opened up all the JLU figures that I have.  The reason I took so long was partly laziness, partly because I'd discovered DC Universe and Marvel Universe figures were more poseable (and up my alley), and mostly because I've never had the space to display 'em all.

Well, after getting married and moving into our own place, I finally have a whole room I can devote to displaying stuff!  Even then, I realized that packaging was taking up a lot of space.  And I mean a LOT.  That also meant that I was buying more stuff than I had time to open.  (Weird, right?  Ok, maybe not...)

I guess I had the lofty ambition of reviewing every toy I bought, thinking that I could do it because I'm a self-professed cherry-picker and proud of it.  But boy was I wrong.  There ain't no way I can review toys faster than I buy them.  The verdict?  I get a brand new JLU display!

Check it out!
Posted by SirDragonBane at 2:09 AM 9 comments: 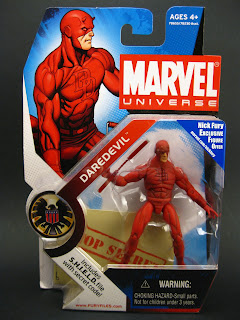 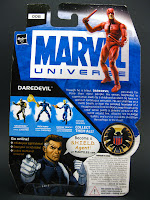 After going on a figure opening rampage, I've unearthed for myself some real gems from the older waves of the Marvel Universe line.  I'd grown lukewarm about these figures because either I didn't remember why I got them in the first place or simply because newer stuff that I was more eager to open found its way to me.

I opened at least 11 figures in one night, from Bullseye to Electro to everyone's favorite superhero lawyer here, and they've all impressed me in one way or another.

And yes, I've held on this long to open this guy because partially I lost interest in him as mentioned above and also because I was holding out for a newer, improved release with a slimmer body.  But the recent Wave 12 revision of him made me realize Hasbro weren't gonna change things around with DD and it also got me itching to bust him open.  So I did.

What else can I say except that Marvel Universe is an awesome line?  I guess I could take some photos and talk some trash about them...What?  I did?  Oh, I guess I did!  Well, on to the review, then!

Check it out!
Posted by SirDragonBane at 4:23 AM 15 comments: 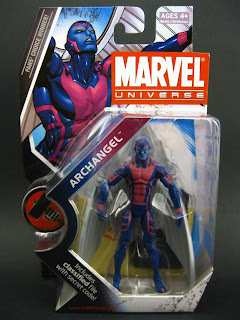 After going on a figure opening rampage, I've unearthed for myself some real gems from the older waves of the Marvel Universe line.  I'd grown lukewarm about opening these figures because either I didn't remember why I got them in the first place or simply because newer stuff that I was more eager to open found its way to me. 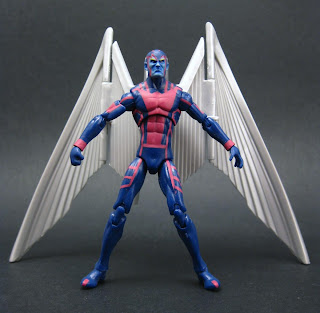 I opened at least 11 figures in one night, from Bullseye to Electro to Union Jack, and they've all impressed me in one way or another. 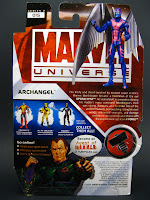 Then the Rangerlord texts me and tells me he's spotted Archangel in the semi-wild, meaning he's in a specialty store at a higher price than retail.

The last time I saw AA, I passed on him thinking that he was a tad costly, and also since the Rangerlord wanted him more.  I thought I'd find more of Archangel sooner or later.  Well, much, much later, I have. Or at least Rangerlord did.  The rest, as they say, is history because I wasn't gonna pass him up a second time!

On to the review, then!

Check it out!
Posted by SirDragonBane at 3:57 AM 8 comments: