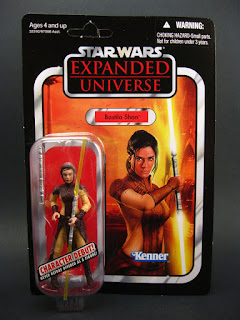 Bastila Shan is exactly the type of Star Wars figure that I wouldn't care about until I saw her on the pegs.  I love that she's an Expanded Universe character from the Knights of the Old Republic computer game.  Most of the EU characters are unknown unless you follow their game/story/series specifically.  And usually this means that their stories are not done being told/continues to be told. It kinda has a roleplaying game-like feel, which reminds me of the time when the Rangerlord and I would get the siblings/cousins together for many a spot of the old West End Games Star Wars Roleplaying Game.  There was a real sense of boundless potential for your characters.  You could be anything you wanted to be--a Force sensitive but untrained character, a half-trained Jedi, a wrongly trained Jedi, or even a guy who thinks he's a Jedi and has powers because of it.  But my favourite was coming up with your own "occupation," like "Space Cowboy" or "Galactic Ladies Man"  Heh, those were the days. 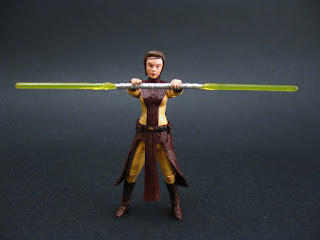 But getting back on point--Bastila Shan captures this same sense of potential in plastic toy form.  And while I was on a buying-characters-I-don't-know-of streak with Barriss Offee, I picked up this lass too--how could I possible resist the "Character Debut: Never before offered as a figure!!!" sticker?  I'm such a sucker!

Check it out!
Posted by SirDragonBane at 5:30 AM 15 comments:

But that's what it sure felt like this year as my dear wife got me this bad momma: 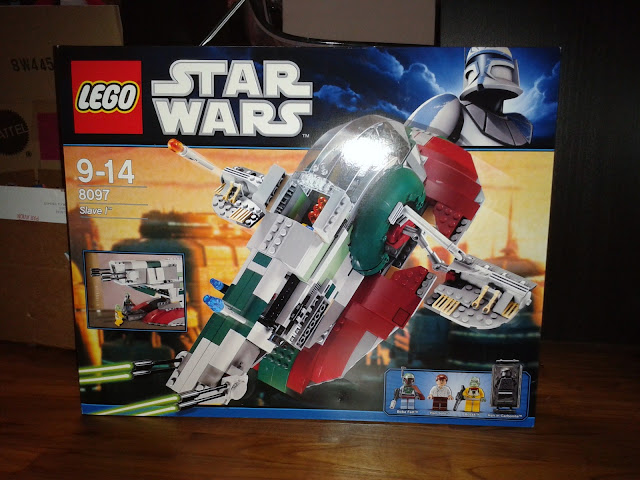 Oh and the wife is adding on a Marvel Universe SDCC 2011 Exclusive Sentinel as well. (Hell Yeah!) 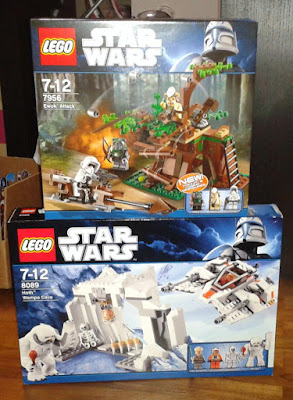 To top it off, the Rangerlord added on these babies:

Aw heck yeah it's gonna be a very a very Lego-y Christmas and New Year for the rest of 2011--let's just hope I get some of the reviews in before the year-end, eh? ;)

That's the other thing I wanted to say: the holidays have really gotten me into the mood and I've been busy running around getting gifts for as many people as I can. So I apologize for the very very infrequent updates/reviews.

Although the son got a ton more toys for Christmas than I did, he's gonna have to go quite some ways to catch up to Daddy.  But my boast ends there--you must be thinking "if he's got so many toys, where the heck are the reviews?!?!?!"  Lol.  On the way, on the way.  (Or at least that's what I tell myself. >.<)

Oh and on one final merry note, I just have to mention this awesome gift I got from a couple of dear cousins of mine.  It's a car windscreen sun shield--but it's ain't just any windscreen shield: 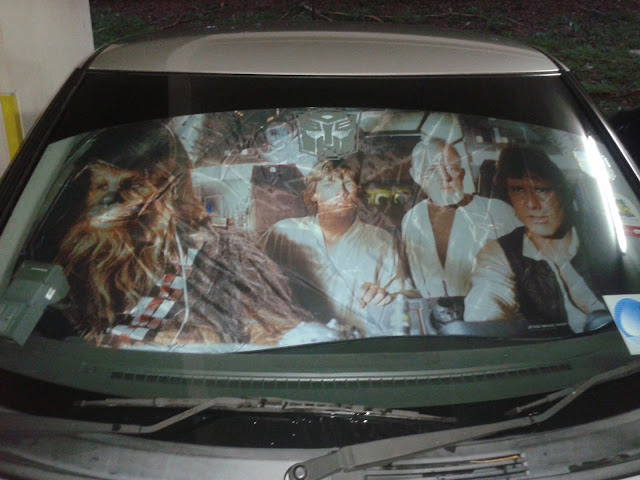 Awww yeah.  Laugh my but of every time I look at it--for those very hot days in Singapore or when I'm travelling in hyperspace. 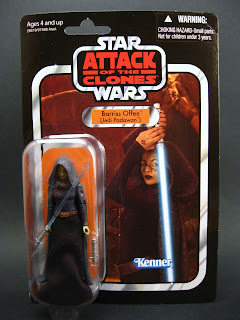 I'll have to say for the record that I'm not a fan of the New Trilogy.  Or at last I'm not as big a fan of the NT as I am of the Original trilogy, not by a long shot.  I seriously dislike the way the NT was treated like a 3 movie-long commercial, with characters more or less being sold as merchandise.  As long as they appeared for a split second on screen, they'd be sold as an action figure sooner or later.  Same with the vehicles, aliens, and whatever else made it into the theatre.  And the Star Wars Universe suffered greatly.

Back in the day, the OT characters, background or otherwise, were very much less deliberate.  In fact you couldn't even tell that George Lucas had merchandising on his mind.  Perhaps he didn't even know himself.  Sure, he may have already had backstories for everyone in the Mos Eisley Cantina to the Forest Moon of Endor, but it wasn't forced on you the way Jar Jar Binks felt like it was.  Hence, I can't really get myself to like the toys--I already have a bad taste in my mouth for most things NT, so I tend to be less partial to Clone Wars stuff. 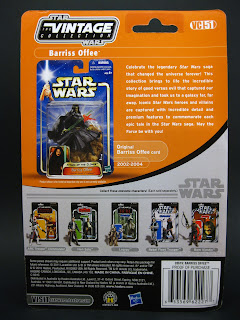 But sometimes, just sometimes, a figure will pop out at you from the pegs and no matter which trilogy/series/timeline/universe they're from, you're just drawn to it.  Barriss Offee is one of them.

Looking at the character pic they have on the card, Bariss really looks like a noob Jedi wannabe who might've been in the movies (she was) and ended up dying a meaningless death (she did)/being an easy kill during Executive Order 66 (incinerated by an AT-TE. Hm.)  The character, despite all the awesome makeup and the lightsaber, just looks uninspired in the card pic.

But look at the figure--it's almost as if they made the figure first and then based the character of the toy.  I just had to get her.  Being at 2 for S$25 helped too.  It's not often Star Wars figures go on discount here in Singapore.  So was Bariss as good out of package as she was in-bubble-on-card?  Let's find out!

Check it out!
Posted by SirDragonBane at 5:47 AM 14 comments: