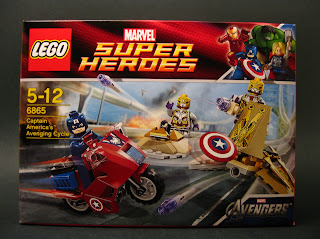 While The Avengers action figures are so far proving a little disappointing, there's no doubt that Lego getting the license for the franchise is good news.  It's great news indeed that they've finally been released in our favourite brick form--and here's their smallest offering in retail so far! 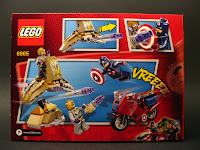 Though I grabbed the Loki's Cosmic Cube Escape and Hulk Helicarrier Breakout set first, this was soon to follow following its release about a week later.  I guess it was also the quickest to put together and that it had one of the figures we've all been waiting for--Captain America!  Sure, I was also dying for Hulk, Thor and Iron Man, but hey, Cap really grows on you!

From his slightly more edgy Ultimates self, to his stance (and death) in Civil War, to his awesome on-screen incarnation, it's no wonder the kids are all seeing stars and stripes.  Well, at least mine is.  He never fails to point out the Cap shield when he spots it--and he's just over 13 months old!

So enough talk and more review action--here we go! ;)

Check it out!
Posted by SirDragonBane at 5:24 AM 18 comments: 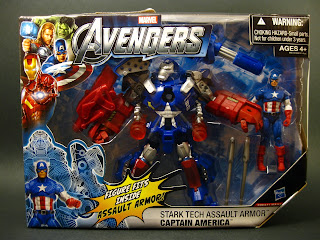 This review should be named "Captain America and His Toys Part II"!  Why?

Simply because the good captain is learning that having less super strength and less speed is just not good enough!  Gone are the good ol' days where he was the strongest, the fastest and the most famous (and only) super hero.  Sure, he's still a master of battlefield tactics and the bestest (eva!) leader there can be, but who can see that sorta thing?  Being reanimated in this day and age where the most flashy (Iron Man), the most misunderstood (Hulk), and the most buff-n-blond (Thor) get all the attention hasn't been great for Cap.  So what to do?  Take a leaf from Tony Stark's book and get some toys of his own! 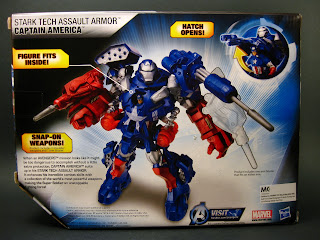 But why "Part II" you ask?  Because this should've been part I.  And the pics in this review will also give you a glimpse or two of Part III. ;) 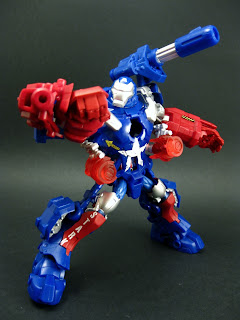 To get back on topic, the Stark Tech Assault Armor Captain America has been on my radar ever since I saw it on the shelves in stores.  But the retail price of S$49.90 (US$39) is a huge put-off.  So I was willing to wait till clearance.

As luck would have it, the eagle-eyed Rangerlord, whose skill with a bow can only be outmatched by Hawkeye himself (or so he says), spotted this sweet, sweet piece of action in Kuala Lumpur, Malaysia, for 60% of the price!  Needless to say, it was a score for sure!  So was he worth it?  Let's see!


Check it out!
Posted by SirDragonBane at 9:07 PM 8 comments: 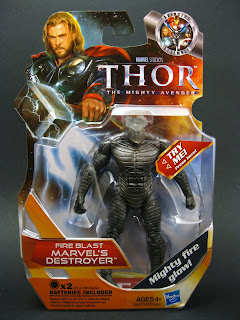 Poor, misunderstood Destroyer.  He's not a bad guy at all--just an abused suit of magical armour.  Locked up by Odin, used by Loki, stabbed by Sif, hammered by Thor.  He even eventually got chopped up to become Agent Coulsen's plaything.  And all just for obeying instructions.  Tsk, tsk.  Really. 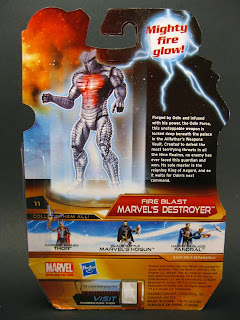 To tell you the truth, I actually didn't see much of this guy around either.  In fact, I think my original intention was to get the Inferno Destroyer from the mythical Wave 4 instead of this one.  But when I didn't see any of that elusive wave on pegs, I moved to get this guy instead.  In fact, part of the reason I didn't open him up till now was because I was holding out on hope that I'd see Inferno Destroyer sooner or later. 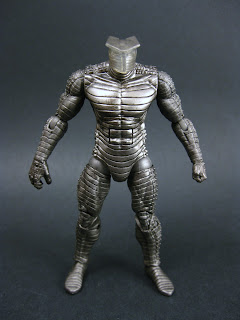 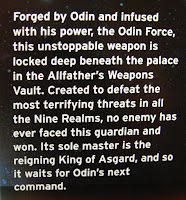 More than a year on, and I've spotted All King Odin, Asgard Attack Thor, and Sorcerer's Fury Loki, all of which are repaints of older figures.  No Inferno D, no Sif and definitely no King Loki.

As I mentioned in my previous review on Secret Strike Loki, watching The Avengers has made me really want to review every Marvel Universe and Marvel movie 3.75" figure I owned but passed up on putting up here.  Fireblast Destroyer is one of them. 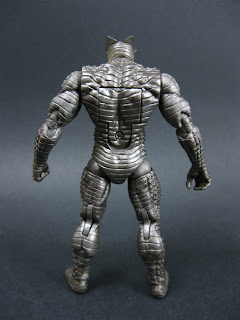 Sure, it's been more than a year, but what they hey, the toy's still as good (or bad) right?

The wife and I managed to watch Thor and Captain America once more before we caught The Avengers on the big screen for the first time and I have to say, those movies feed into this summer's record-breaking blockbuster seamlessly.  Though you don't really need to have caught the former two movies, it does enhance the experience of The Avengers.

And boy does it make me wanna take out my action figures and play with them. So that's just what I did with the Destroyer!

Check it out!
Posted by SirDragonBane at 1:34 AM 15 comments: 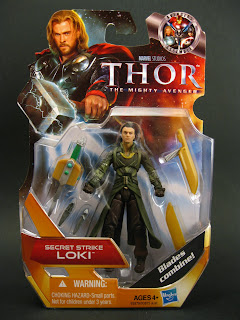 I'd like to begin with a standing ovation, a standing ovation and three cheers for fella who plays Loki in Thor and of course, The Avengers.  That's right, Tom Hiddlestone.  There was only one of you and yet you more than held your own against the Mighty Avengers ensemble.  Aw heck, in fact Robert Downey Jr, Chris Hemsworth, Chris Evans, Mark Ruffalo, Scarlett Johansen, Sam L. Jackson, Jeremy Renner--all of you deserve a long, long round of applause. 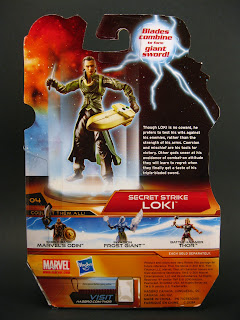 What can I say? It's been 9 days since I first caught the movie, and 5 days since I saw it a second time and I'm still buzzing.  And as I write this, I'm plotting a 3rd and possibly a 4th viewing. (One of these schemes involves sneaking in on free tickets to What to expect When You Are Expecting and then peeling away to catch The Avengers.  Heheh.)

So why review this older Thor figure when there are other, newer figures from the Avengers line?  Well, because most of the 3.75 range is under articulated (See Ultimate Thor, Gamma Punch Hulk) and because Joss Whedon is a god in the movie heaven that is Hollywood. 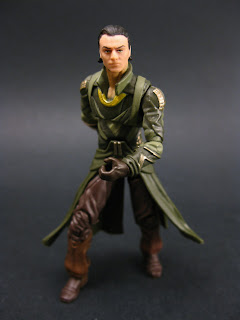 He's made me wanna go back and review every single Marvel Universe, Iron Man 2, Thor, Captain America and and Marvel action figure I haven't put in front of the camera and blabbered about.  And I just might.  So who better to start with than with Loki, the ultimate deceiver, played by a man who just steals the scene when he's in it? 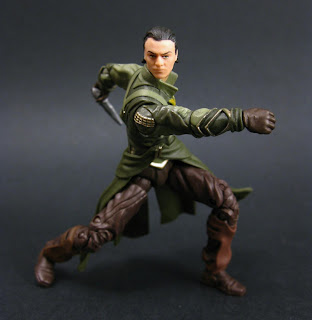 When Secret Strike Loki was originally released a year back, there were already pictures of a King Loki to come, so I held back, thinking that I'd be able to easily pick this figure up on clearance.  And it's turned out to be true!  I got Loki here for S$10!--only for the price to be slashed to almost half that a week later. -__-

But here's no regrets, because after all the lack of PoAs from the Avengers line, this Thor movie figure has turned out to be quite a gem!

Check it out!
Posted by SirDragonBane at 2:03 AM 24 comments: