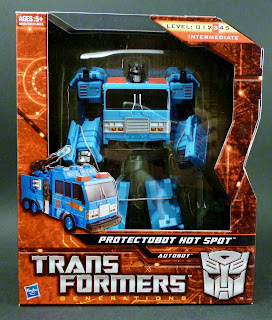 It's been too damn long since I last reviewed a Transformer.

No, it isn't because I like them any less, nor is it the because there's been too much great stuff from Marvel and DC. (There has been but that's not the reason: a toy that gets me excited will get me raring to review it no matter what.) 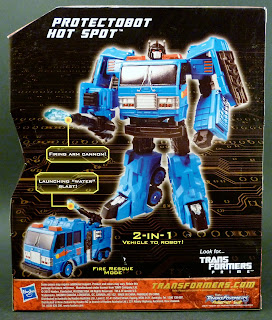 The real reason is that I'm a real G1 fan.  Don't get me wrong, I'm not staunchly "only G1 toys."  In fact, I think those toys are dated.  But I think their designs are timeless.  Clean lines, very human-like faces, yet on the whole very much robot.  And I love it when they take it back to the drawing board and give us a brand new toy with all the bells and whistle but with and update on the classic look.

And that's why I love Hot Spot.

This guy and me go a long way back.  After Optimus Prime died in the Animated Movie, Hot Spot was my new favourite.  He kinda looked like Prime, was the leader of the Protectobots, and had a posse that would have his back no matter what.  If things got rough, they could even merge and form Defensor!  Needless to say he was my favourite combiner. 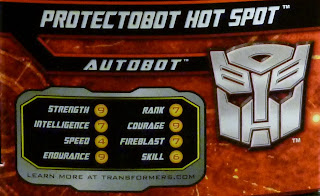 So when I saw thins guy n the shelf, I didn't hesitate.  I knew he was in short supply, since I saw one of him to every three Megatron and Power Dive.  To find out they are all part of an Asian exclusive line just make me think how lucky I am to be living in this part of the world! 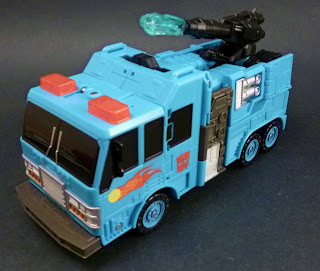 Like: Hot Spot's blue.  I know, it's probably the most annoying shade of blue a Transformer can be, but it's the exact same blue the original toy was (or at least I remember it to be).  They've cast it just the right shade to make your eyes hurt under bright light. Lol.

Like: The little details on the sculpt--metal pipes here, pistons and complicated machinery there.  His thighs have this "robot" detail, and his forearms have the exhaust pipes from when he's in vehicle mode.  These are hidden by panels which fold down when he's in robot mode.  The tops of his feet have nicely silvered double pistons--those are my favourite detail! 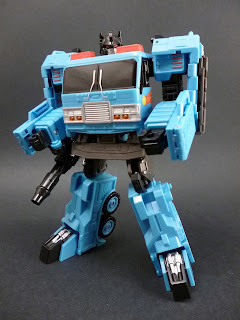 Like: The tampographed details like the the "hot spots" on the side of his torso/on his doors.  Those look just like his classic toy but somehow even better here!  (Well, for one, their not stickers put tampos.  Lol.)  I like the black wind shields, which is something different from the G1 toy, which has a chest panel that hinges upward to add to his pecs.  Hot Spot's black opaque glass windshield are different from his buck-mates Inferno and Grapple--clear wind shields are for the less cool 'Bots. ;) 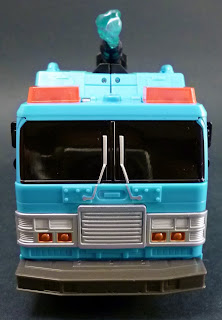 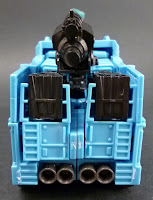 Also, he's got two Autobot symbols on either side behind the fiery hot spots, the sirens up top are also very cleanly applied, as is the silver of his front grille and lights, and his aforementioned pipes above his middle wheel.

The eyes are also tampoed on a nice, dark red, like the old school toy.  The bad thing about this is that the eyes don't get the full effect of the light piping, which is there because the back of his head is translucent but can't filter the light all the way through because of the coloured eyes. 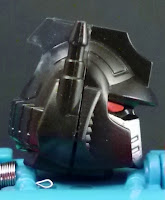 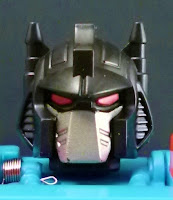 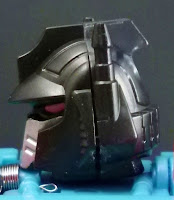 Dislike: That he can't combine with the rest of the Protectobots to form Defensor.  Worse still: they didn't/haven't released the rest of the gang as re-imagined G1 toys yet. :(

Wouldn't it be awesome if Hasbro did something like this? (Drool...) 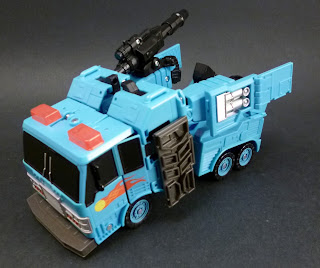 Like: That his forearm blaster is part of his transformation.  It swivels to fit nicely on the under part of his forearm and swivels again to fit perfectly as his water cannon when in fire truck mode.  It's also a very nicely detailed sculpt that does the one thing every little boy loves and fires a projectile.

Dislike: That he doesn't come with any other guns.  His classic figure come with two giant blasters, which could be also used in Gestalt mode.  Then again, the old toy also came with Defensor's chest piece, hand and feet.  It's a real shame about the guns though, because he's got two gripping hands and nothing to hold in them! 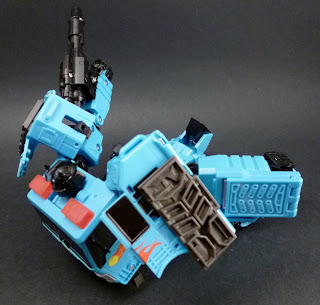 Like: His size.  He may be a Voyager Class figure but stands taller than my Henkei Prime.  Of course, the scale of characters in the G1 cartoon wasn't always consistent, but I'd like to think of my combiner leaders as being fairly large.  So slightly larger than the greatest Autobot leader is fine by me.  After all, when the Protectobots or any other Gestalts combine, they should be larger than almost everyone else!

Dislike: That Hot Spot's missing his classic extendable ladder!  That thing was a huge hit with everyone I knew back in the day because it could really extend to something like double the old toy's height!  And what's a fire truck without a ladder, anyways?  Lol. 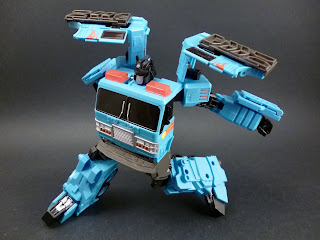 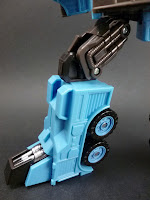 Also, when combined as Defensor, the ladder hung down his back like it was the coolest (and largest) robot pony tail.  And since he was the only one who had it, Defensor was the Mack Daddy of combiners everywhere and they all gave him envious looks every where he went.

They were jealous of his strength, good looks, intelligence, and that full head of hair (that of course ended in that bitchin' and yet usable pony tail.)  He could also use it to smack them in the face when in brawl between Gestalts, making him the ultimate fighter among his brethren. 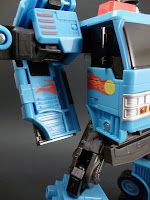 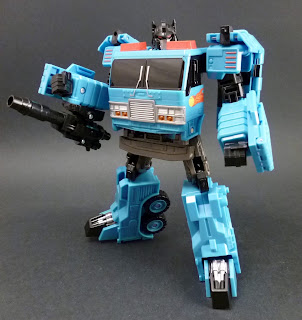 Like: That the kibble that forms over his arms in robot mode can be swivelled round to the back to give his shoulders and forearms maximum movement.  I also think it's looks better hanging behind his arm than at is side.

Dislike: That the back of the figure is literally missing.  From the front, he looks great.  from the side, he looks like his missing the back half of his torso.  From the back, he looks completely naked.  This is the one drawback of this sculpt that prevented me from getting Inferno and then Grapple when they were initially released.  But this is Hot Spot!  And with his release, Hasbro got me in my soft spot. 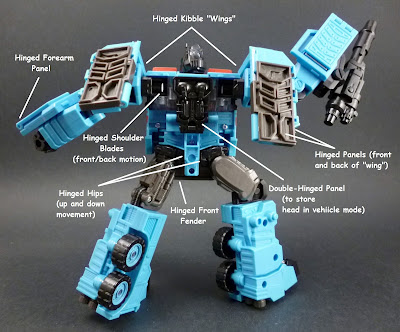 Like: That modern day Transformers toys continue to have magnificent articulation.  Gone are the days when limbs were only articulated when it served the transformation of the figure.  Now, it seems every limb has swivels and hinges all over the place, hidden so well that you actually have to play with the toy several times to discover them.  Hot Spot is no different!

Dislike: That he's missing a torso swivel.  It's tough to give robots chest pivots like in superhero/human/organic figures.  A hinge might be better but would serve no purpose, really.  But a hinge would go a long way towards helping Hot Spot out in many a pose and making him look less like he had  giant paunch (which he doesn't!  It's all mechanical muscle, I tell you.  And with space for the Matrix of Leadership.  Just in case.)  A torso hinge would make this great figure even better.

Aesthetics: 9/10 - Beautiful!  the more I look at it, the more I smile.  I talked about liking new, updated takes on G1 figures and well, this is one of them.  It's a look that is probably better than the original and has lines that look cleaner than the G1 design too.  And of course, his head design is still kinda like Optimus Prime's!  In fact, it could be that they are long lost brothers... ;P

Poseability: 8/10 - As all modern transformers toys are, Hot Spot is superbly articulated.  Also, being a Voyager Class size figure, he's got the bulk and weight to be stable in most any pose.  Add to that the many straight edges of a TF's robot form and he'll balance in just about any pose you can put him in. 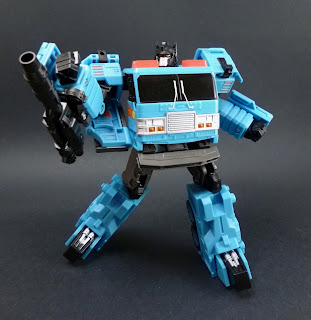 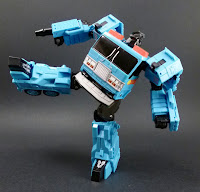 Hot Spot's joints are also nice and tight, which is a testament to the quality control the 'Bro has on Transformers. The only issue I have with this sculpt is the missing torso swivel.  If he had that, we'd be looking at at least a 9 in this department. 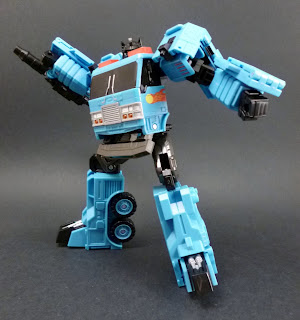 Fun: 9/10 - All about the nostalgia for me.  Optimus Prime needs his best ever Second-in-Command/successor, after all.

The fire truck mode is nice and tight and clips together very well, not to mentions rolls smoothly too.  Though I do miss the classic ladder and the twin guns he used to wield because he is smarter than any Autobot or Decepticon, this guy is still very much a joy to play with.  It would be even better if he could actually combine to form Defensor, but that might be wishing a little to much of this sculpt.  Then again, if you saw those pics in the link above, you might think we've asked too little! ;P 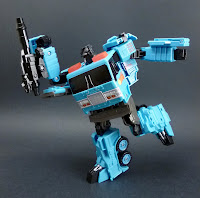 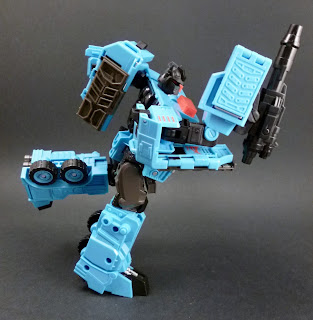 He could do better in the accessories (guns) department for sure, though. 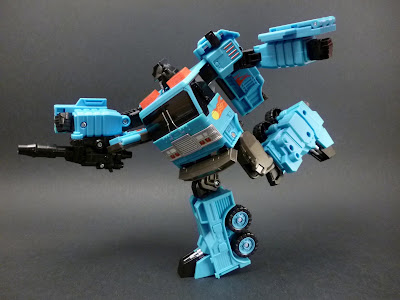 Overall: 8.8/10 - Hot Spot is heavy in the memories department for me, so there are some bonus points here. The surprising thing is that I didn't realize how different the G1 toy looked from this version.  But I welcome an update, a cleaning up, and an improvement on the design, which this definitely is--I just love the new yet classic look!

Hot Spot isn't for everyone but for those of you, like me, who love this guy, he's a must-have.  Just like those who love Grapple and/or Inferno, I wouldn't miss out on getting him while he's still available in retail.  And like those who love the latter duo, I now understand why I don't see any more of them on the shelves--you guys simply had to have them! ;) 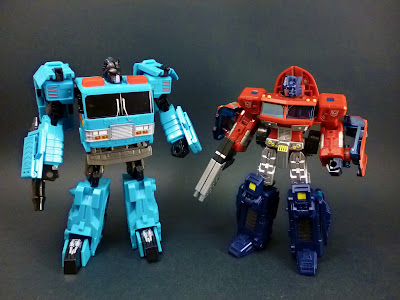 I also might just now have to go out and buy the recently released Combaticons!  Sure, they aren't in G1 style, but they're the closest I've seen in recent times and are all Deluxe class figures, meaning they'll form a pretty large combiner!  It's probably the first time in along time that they've released a combiner that size--none of that movie Constructicons fiasco where only the Legends size figures combine.  Hooray to Hasbro for listening to the fans and giving us some "real-sized" combiners!  It's time now to break some new ground and give us Voyagers who can combine with Deluxes and surely it'll be too much of a stretch to ask that of Hot Spot.   But one can always hope!
Posted by SirDragonBane at 2:29 AM