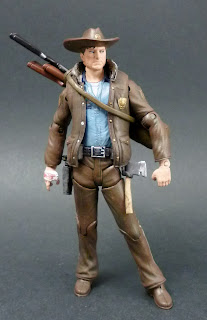 Otherwise known as "The Man" in the TV version of the Walking Dead, Rick Grimes is the everyday sort of guy who starts out as an average Joe but is forced by circumstances to become a survivor, a leader and eventually, a hero.  He's the sort of guy you can relate to, a person we can all see ourselves becoming because he's got very human weaknesses and strengths.  In other words, he's the perfect sort of guy to be the centre of a zombie apocalypse story.

In toy terms, that means if you have a zombie action figure collection and need a dude to complete a display, Rick Grimes is your man.  This also means that if you have friends over, they'll easily recognize Rick in all his bloody glory because who hasn't seen the Walking Dead, right?  well, that's the irony--the TV version of Rick is not the one I'd recommend: poor articulation, a fixed pose (think NECA's Harry Potter range in terms of these two things), a not-so-accurate likeness and average paint render him more of a staction figure.  It would also be so easy to cast this Comic Series version in the same light because of the bad rap of the movie figure. 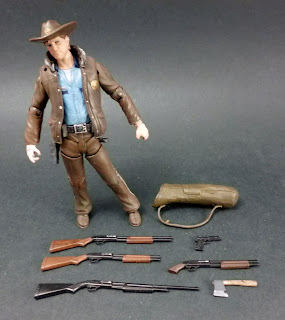 I've not read the graphic novels, but my wife has and she's rarely reads stuff unless it's worth it.  We bought the super-fat 1st compendium that contains the first eight books and let's just say she devoured it like a Walker on fresh human flesh.  I've yet to get to it, though it's on my to-do list, and it remains one of the few properties my wife actually knows more than me about.  So yeah, when it comes to zombie knowledge, I am the suck compared to wifey...for now, Dear, for now. ;P 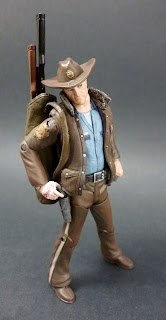 So what do I know about comic series Rick Grimes?  Not much.  I do know I love the on-screen Rick, though there's no doubt he's probably a slightly different character from the books.  In terms of this action figure though, he's probably similar enough at this point of the story.  It's do-or-die time, grab-a bag-of-guns-and-get-into-the-big-city-looking-for-other-survivors moment.  I'm sure it happens in the graphic novels, just like it happened in Season 1 of the TV series.

And here's rick Grimes, with that famous bag of guns!

(Oh, and sorry for the lack of package pics.  I'm sure I took one before I ripped the guy open.  But I can't seem to find it!  Lol.) 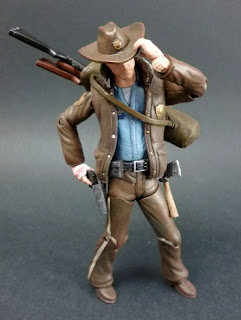 Like: The detailed sculpt and paint. ...Rick's eyes are painted slightly to the left, turning what would be a blank expression into a sly/suspicious/wary one. 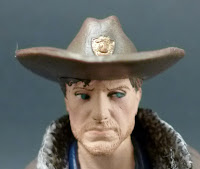 Though the 5" scale is strange, McFarlane has embraced it and made it work.  It makes other regular action figures of the more common 6" and 3.75" scale incompatible though.  The upside is that the sculpts are large enough to hold a great amount of detail but not so large that stuff tends to get unpainted.  Also, it means that figures are not too small that paint gets sloppy as in some 3.75" cases. 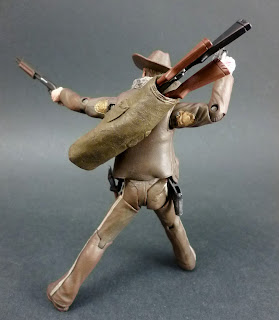 Like: One of the first things I tend to take notice of is a figure's points of articulation.  Well, Rick here has plenty (24 on my count), all of which are well hidden and tend to surprise you because of how well the sculpt hides them.  The highlights include: A great ball-jointed head, swivel/hinge (ratcheted)/swivel wrists (that's right, a 3-in-1 wrist joint!), swivel legs and ball-thighs combo, and ball-ankles. 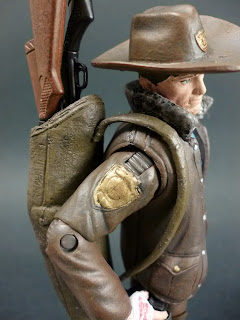 Something about the ratcheted hinges in his shoulders and wrists give this figure and added feel of tightness.  It feels like these hinges are so secure they'll never become loose! 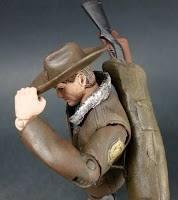 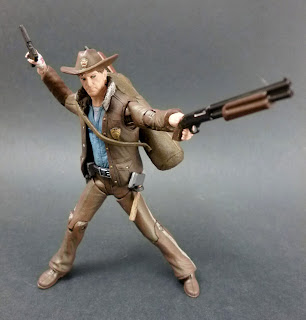 Dislike: Super loose ankles--the left one on mine falls off quite easily. (Yet somehow he can still balance on it!)  The head is not as loose but can also come off easily when moved around to much.  It seems like the joints that are loose on this figure are the ball joints.  Some super glue-trick treatment is definitely in order.

Like: Tons of guns!  Well, five in total, actually.  He's got his handgun, a long rifle, and 3 shotguns of various lengths.  Yes, my knowledge of guns is the best, as you can tell.  Haha.  Rick's also got a carry bag to put his arsenal in--but the bag is also an important part of the plot, at least in the TV series it is, so this means something that he come with it.  I don't know if the bag means the same thing in the graphic novels, but I'm happy that I can relate just having seen the TV version.  As if all that stuff ain't enough, he also come with a hatchet just for those times he runs out of ammo. ;) 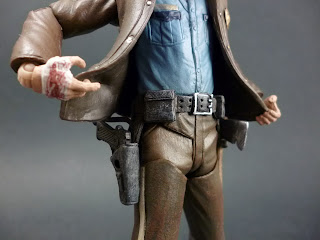 Like: His gun belt, which has a holster for his gun, a leather loop for his hatchet, and a couple of pouches--he can carry all his gear and still be kickin' some zombie-ass! 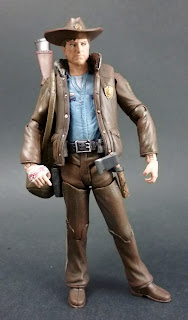 Dislike: No chest pivot.  And I think this is something McFarlane won't do if it disrupts the torso sculpt.  His hat is also not removable--but I'd rather have this than have it be loose and fall off all the time and/or have Rick look weird when he doesn't have his hat on. 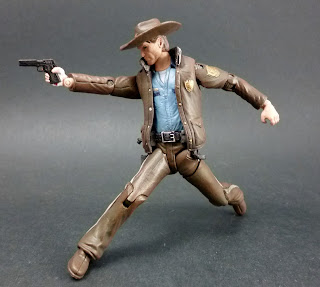 Like: And this is only because he can move out of it--his neutral "weight-on-one-leg" pose.  So far, all of the McFarlane Walking Dead figures have some sort of fixed neutral pose.  Some have the articulation to get out of it, some don't.  Case in point is the movie Rick Grimes and the movie Daryl Dixon, who has proven to be a hot favourite despite this inflexibility and his short-looking right arm.

No such problems for comic Rick, as you can see! :) 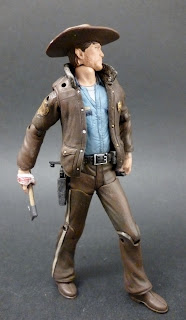 Aesthetics: 9.5/10 - The great paint apps were the first thing I noticed--there seems to be at least 2 different shades of colour for his uniform, his duffel, and his skin.  His face is what makes him awesome, though.  Sure, he looks nothing like in the TV series, but the ruddiness, the 5 o'clock shadow, and the cool blue eyes. 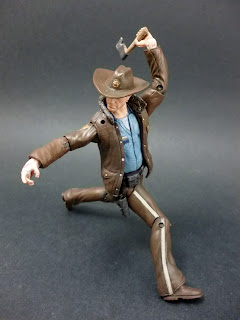 What I especially like is that his eyes aren't painted staring straight ahead but slight looking to his left.  It's a deliberate attempt to make him look a little wary and it works!  It also works well tilt his head this way or that to create that "cop stare."  And of course, it's great when you have him holding out a gun in his left hand--it looks really, well, real!

All this before I mention his highly detailed sculpt--MrFarlane's got clothes down pat.  The folds, wrinkles, the way the "cloth" hangs off his frame.  Even when you open up the flaps of his jacket, his torso doesn't look like it was made thinner to accommodate the outer jacket layer, unlike a certain other  company that re-uses a particular buck for every character in a suit. *cough* *Mattel* *cough* *Dark Knight Rises/DCUC* *cough*... 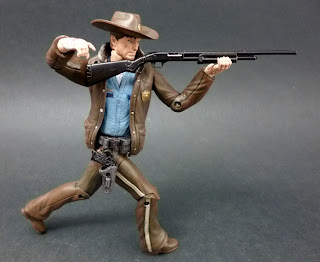 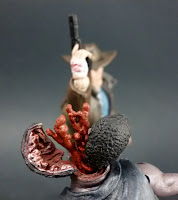 Poseability: 8/10 - Rick's right leg is shorter than his left and it's done this way just for that weight-on-one-leg neutral pose.  I know some people really hate this, but I'm ok with it as long as it doesn't take away from what other poses he can achieve.  I must say, Rick here doesn't have a problem with being flexible.  He can pull off other looks easily and still look good doing 'em. 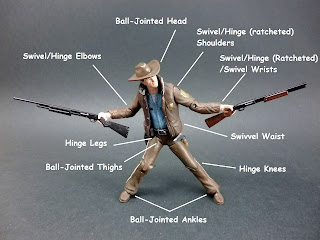 While he might not be doing any sort of Daredevil/Spiderman gymnast poses any time soon due to his leg balls and knees being limited (both about 45 degrees), he's got just enough flexibility in his legs as a whole to be placed in a variety of stances. 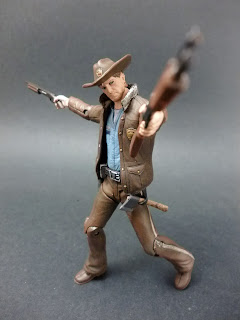 Value: 9.5/10 - The tag on this guy says S$19.90, but I think I got at least 10% more off for him!  You don't see figures this detailed, this well painted, and this well accessorized for these prices any more these days--or at least they are few and far between. 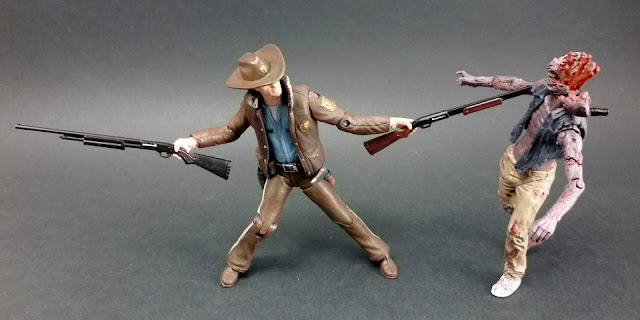 To top it all off, he comes from one of the, if not the most, popular zombie franchise out there right now, so there's no doubting his score in the value department. 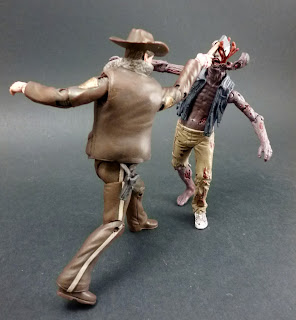 Overall: 9.25/10 - Bonus points for being my favourite character from the series! 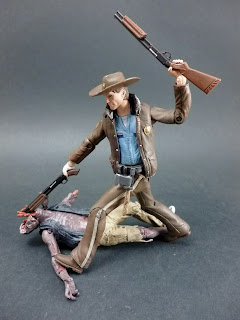 But it would be more accurate to say he's the guy I'm most intrigued with when he comes on screen--I'm always looking forward to what he's going to do next, whether it's storm a zombie-infested city on a horse or, heck, stay on a farm.  I have yet to read the graphic novels, but I imagine he'll be even more kickass there in his own comicbook way.  And all that just based on the awesomeness of this figure! 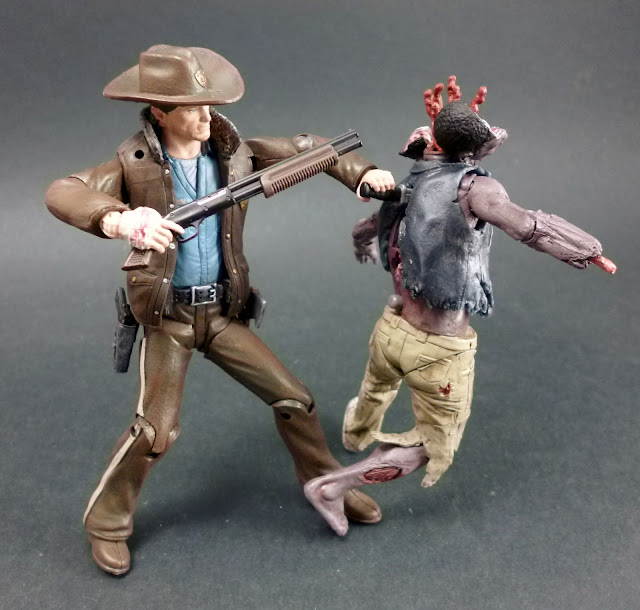 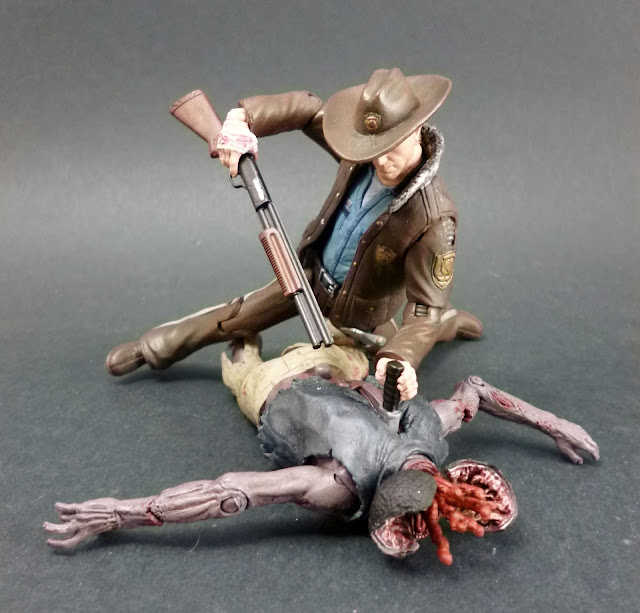 Posted by SirDragonBane at 12:22 AM