This year's STGCC a month ago was a big surprise for me, really--I just wasn't expecting that many people to show up! Lots of people dressed up too--I could hardly turn here nor there without a glimpse of a superhero, a cosplayer, or a Stormtrooper.

Also, I have been rather out of the loop about new toy releases. Sure, I've kept up with the usual Hasbro Marvel Universe and Star Wars offerings, and even the occasional DC and Masters of the Universe piece of news, but Hot Toys, Play Imaginative (Super Alloy series) and some of the local stores threw me for a curve--and it was a good thing.

So just how impressive were they?  Let's see!

STGCC convention Exclusive Metroplex!!! (By The Falcon's Hanger) -- This thing was a whopping S$260.  The differences between this and the retail version (S$169.90): The extra laser gun, the chromes parts (thighs, face) and the 12 "minifigs", which I found kinda not enticing.  They didn't transform and were one color solid plastic TFs about 2-inches tall.  Also, the Con exclusive box opens up like this. (Left) 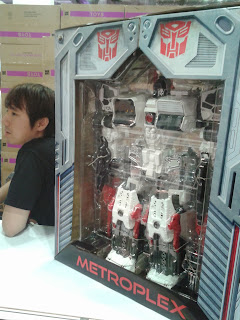 I'm glad a store like FH does this--they do a Con exclusive every year--it makes for something to look forward to and something to look at in a small-ish con (compared to the likes of SDCC and NYCC) like this.  I didn't pick this up, but I did find a retail version a week later for 20% off (S$136), which my wife then snagged for me as an anniversary present. ;)  Thanks, dear darling wife! ;) 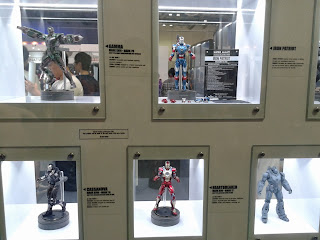 These were seriously awesome to behold as there were maybe more than a hundred figures all on display in their own little glass compartments of an extended display case.  Looking really metallic and with great paint and lots of accessories, I don't think they'll come cheap but will be very popular, I'm sure. 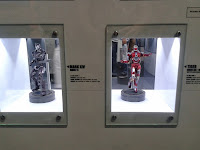 Play Imaginative also does the 12" Super Alloys line, but I like those a bit less because they figures look a little (and this is just a little) more disjointed at the, well, joints.  They don't look as clean as Hot Toys--but then, what 12" figures do, right? ;)

These 5" Iron Man figures, though, look super stunning.  And I think if you're thinking of starting a Hall of Armor collection that isn't 12 inches tall, this would be it.


The dress-ups -- This year's was the most numerous and probably the best I've seen in the four years of STGCC: 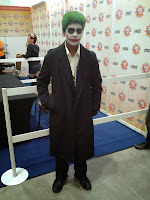 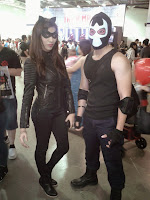 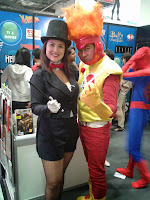 My two boys also dressed up, one little one as Supes and older on one as Cap (he put on the mask for all of 6 seconds, then decided it would interfere with his vision while scurrying around). 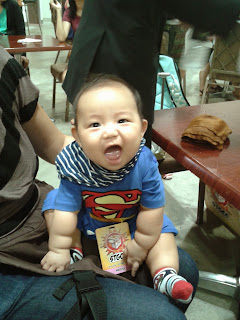 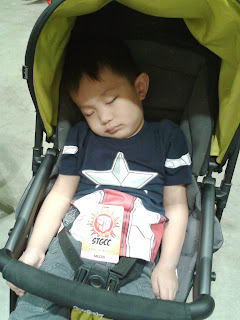 Or should I say the little one was Super-stoked and the older boy was Captain Puckered-Out. :P

We also loved the 501st,and the DC superheroes dress-ups.  And we were only at the Con for perhaps 3 hours on Day 2!  I really wanted to spend more time there.  Pity, I'm going to have to wait till next year.  Glad the organizers are listening and are constantly trying to improve the event.  It was fun for the whole family! 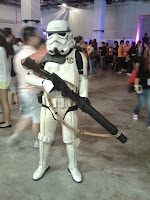 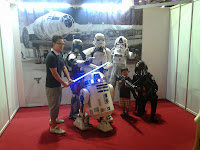 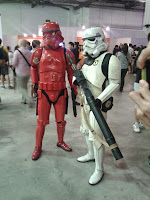 The Hot Toys display--It just keep getting bigger and better every year!  They could just sit on the fact that they have so many characters across different brands now and just cram 'em all in a display.  Instead, they keep raising the quality of their displays: 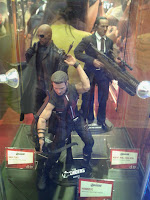 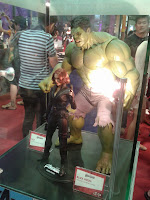 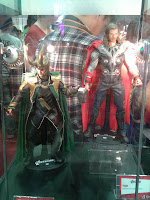 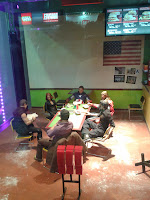 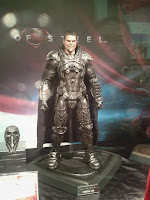 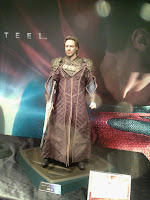 And of course, everyone was just Iron Manning the heck out of everything! ;P

I still feel STGCC needs more Con exclusives, at least on the cheaper action figure side of things.  Marvel Universe Greyscale Cap-on-Ice was the perfect example in 2009 (Out of Toys R Us), but whne TRU pulled out the following year, no one else had a similar sort of offering.

I also maintain that the Con can bigger on non-computer gaming!  Board games, card games, miniatures games, miniature war games--the event can really capitalize on its name and get major gaming brands on board for demos, tourneys, and even fun group or walk-in tourneys for families.  This would be really be fun and separate the Con from, say, a Sunday trip to China Square Central (The local place with the concentration of toy speciality stores)!

And finally, though I know Marina Bay Sands is a very up-market place to hold events, the parking there is way too expensive.  S$6 for the 1st hour and S$1 for every subsequent 30 minutes is way too much. Bleargh.

Overall, I'm looking forward to next year.  Hopefully, I won;t be as out of touch as I was this time but will be just as surprised by STGCC '13. 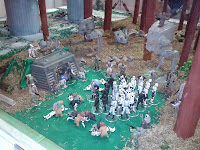 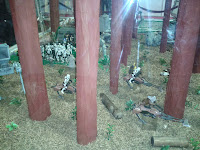 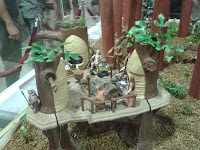 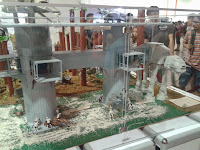 Posted by SirDragonBane at 2:05 AM